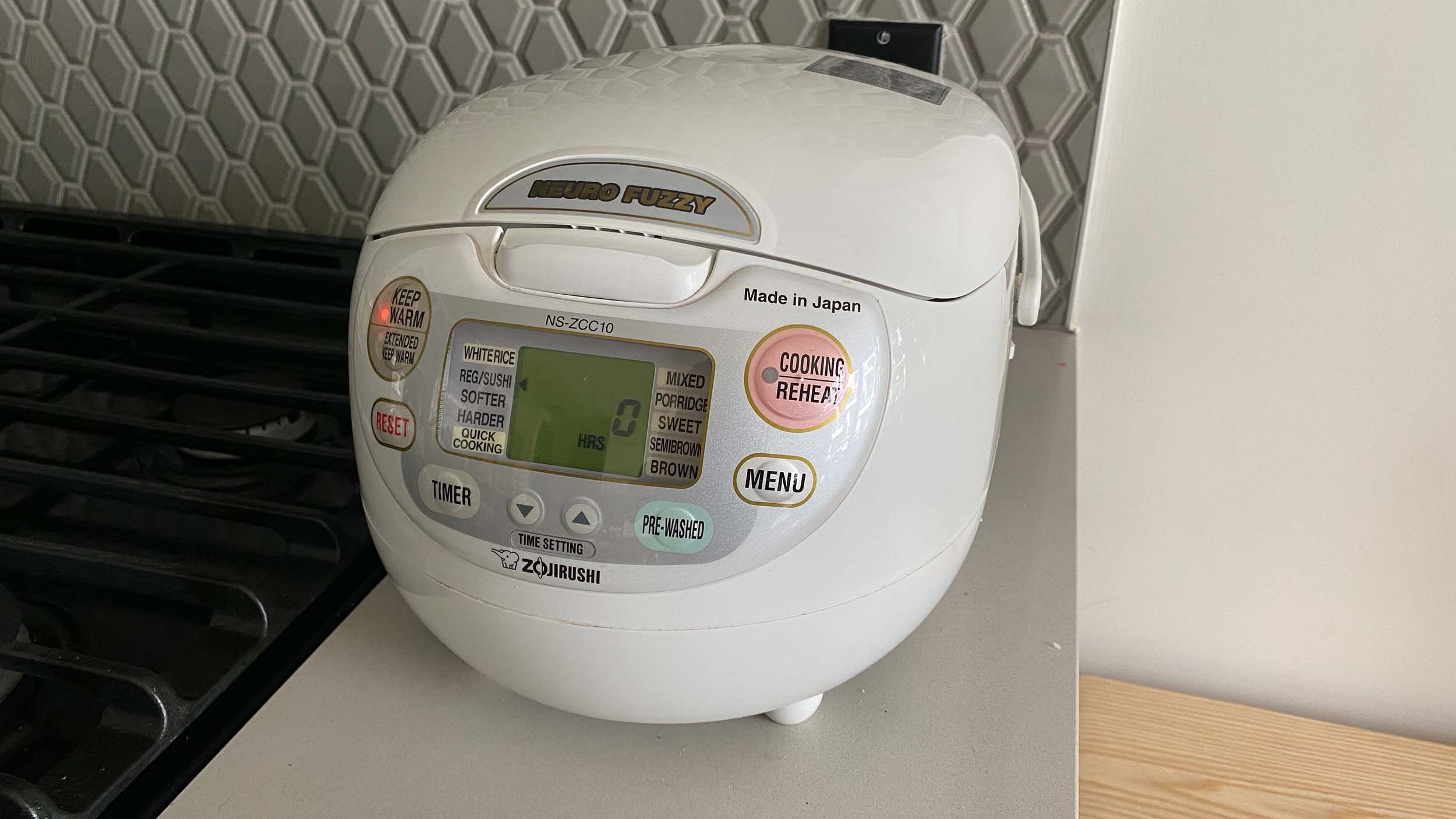 If you eat rice frequently, you might be thinking about investing in a nice rice cooker. If you’ve done any research at all, you’ve probably come across the Zojirushi Neuro Fuzzy Rice Cooker and Warmer. To find out if it’s actually worth the price tag, we went hands-on with it to see how it stacks up to the competition. Throughout our testing, the Neuro Fuzzy cooked perfectly fluffy and delicious rice, was easy to clean and had useful features that made us give up cooking rice on the stovetop for good.

The Zojirushi Neuro Fuzzy Rice Cooker is pricey, but consistently delivers perfectly fluffy rice and has a long list of features that make it extremely easy to use.

Why we love the Zojirushi Neuro Fuzzy Rice Cooker

We loved the Zojirushi Neuro Fuzzy so much because of its outstanding ability to consistently cook great rice. The rice at the bottom of the pot was never burnt or overcooked, and no matter the type of rice we made it always had a great texture. We cooked sushi rice, brown rice and basmati rice, and the process of cooking each was incredibly simple and gave us perfect results every time. Just wash the rice, add the appropriate amount of water, press a couple of buttons, then sit back and let the machine work its magic.

According to Zojirushi, the Neuro Fuzzy’s software and Micom chip let it judge how much rice and water is inside the pot, and adjust the cooking process accordingly. That means even if you’re less than precise and add too much or too little water, the Zojirushi Neuro Fuzzy Rice Cooker will compensate for your mistake and produce a delicious pot of rice. And in practice, we found that the Neuro Fuzzy easily dealt with small mismeasurements. To push the tech to the limit, we cooked 2 cups of rice with 1 cup of water and another 2 cups of rice with 3 cups of water to see if the machine could salvage it. The version with 1 cup of water didn’t taste too bad, just a little bit dry; and if you wanted to fix it all you’d have to do is add a bit more water and re-cook the rice. The version with 3 cups of water was definitely mushy, but it wasn’t terrible either.

Beyond its exceptional rice cooking abilities, the Neuro Fuzzy also has some extremely useful features. One of our favorites during testing is its “Keep Warm Mode,” which automatically maintains your cooked rice at serving temperature for up to 12 hours after cooking. It’s perfect if you want to cook your rice hours in advance of a meal so you’re not rushing around the kitchen (or for a late-night bowl of warm rice after dinner). And if you want to keep your rice in the cooker for longer than 12 hours, you can switch it from “Keep Warm Mode” to “Extended Keep Warm Mode” any time before the initial 12 hours are up, which keeps the rice at a lower temperature (about 140 degrees Fahrenheit, warm enough to inhibit bacterial growth that can cause food poisoning) for an additional 8 hours. When you’re ready to eat your rice again, you can use the reheat function to get it back up to serving temperature.

Another feature we found ourselves using a lot was the “Quick Cook” function. Cooking rice on the stovetop typically takes a little over 20 minutes, but the regular mode on the Zojirushi took 42 minutes to cook sushi rice. If you’re in a pinch and want rice faster, you can switch to “Quick Cook,” which made a pot for us in just 31 minutes. The quality of the rice isn’t quite as good as the regular cook, but it’s still far better than any stovetop rice we’ve had.

While there are many reasons why cooking with the Zojirushi Neuro Fuzzy is great, we also love how easy the cooker is to clean. There are two removable pieces that need cleaning after each cook, the inner pan and the inner lid. Each can easily be removed and hand-washed in seconds — unfortunately they’re not dishwasher safe. And since the rice cooks so evenly, you’ll never have to scrub off rice that’s stuck to the bottom of the pan.

The Neuro Fuzzy is available in two sizes, one that cooks up to 5.5 cups of rice and another that can cook a whopping 10 cups. The smaller measures 10 ⅛ x 13 x 8 ⅛ inches and can fit on small counters relatively easily, and the larger measures 11 ⅛ x 14 ¼ x 9 ½ inches. The cooker also features a retractable power cord (which measures 45 inches when fully extended) and comes with a spatula, a spatula holder that attaches to the cooker and two measuring cups.

On top of its other attributes, the cooker also has a reheating mode, modes for cooking your rice at both a softer or harder texture, a clock and a timer. Our favorite by far, though, is the music —  the Neuro Fuzzy sings a little song when you start cooking and when the cook is done. It’s a cute extra that’s purely cosmetic but it brings a bit of joy to the process that we really appreciate.

There isn’t much we don’t like about the Zojirushi Neuro Fuzzy Rice Cooker. The biggest issues are really the price and the cook time. If you’re used to whipping up a pot of rice on the stove in 20 minutes, you’ll have to learn to be a bit more patient with the Neuro Fuzzy. While our sushi rice cooked in 42 minutes, the machine’s manual says it typically takes 48 to 55 minutes (for the 5.5 cup version). The “Quick Cook” mode helps, but it’s still a bit slower than cooking on the stovetop. However, we definitely think the lost time is more than made up for with the outstanding quality of rice you get, and since there isn’t much effort involved you can prep the rest of the meal (or just go do something else) while you’re waiting.

The other big downside is its price. $230 is a lot to pay for a rice cooker, but if you cook rice a lot we think it’s well worth the investment. Thanks to Zojirushi’s software, the rice you get tastes so much better than the rice you could cook on a stove or in a simpler rice cooker, plus there’s fewer unknowns when cooking other types of rice you might not be as familiar with such as brown rice or even porridge.

How it compares to other rice cookers

The Zojirushi Neuro Fuzzy hits a nice middle ground in the world of rice cooker technology. It has useful technology that lets it outperform more basic rice cookers, but it doesn’t have other features that would bump up the price like induction heating or pressure cooking.

Tiger has a couple of options that include a Micom chip and other similar features for a lower price, including the Tiger JAX-T10U-K for about $200 and the Tiger JBV-A10U for about $80. Cuckoo, another popular brand, offers Micom chip rice cookers like the Cuckoo CR-0655F, which is around $100.

If you don’t make rice often, don’t care as much about the fluffiness of your rice and just need a cheap machine to make rice every once in a while, you might be happy with a conventional rice cooker like this $50 rice cooker from Zojirushi or this $25 rice cooker from Black + Decker. If you want a slight upgrade from that you can check out the Zojirushi Automatic Rice Cooker which also features a keep warm function — but doesn’t have the Neuro Fuzzy’s smarts — for around $130. The Aroma Housewares ARC-954SBD is another conventional option with solid features like keep warm for $40.

Don’t get us wrong, we know $230 can seem like a lot to spend on a rice cooker. But the improvements you get from the Zojirushi Neuro Fuzzy Rice Cooker are well worth the price. It has amazing technology that makes every single pot of rice taste fluffy and delicious, but it doesn’t go overboard with other top-of-the-line features. We think it strikes the perfect balance between performance and price, which is why we love it so much and think you will too.