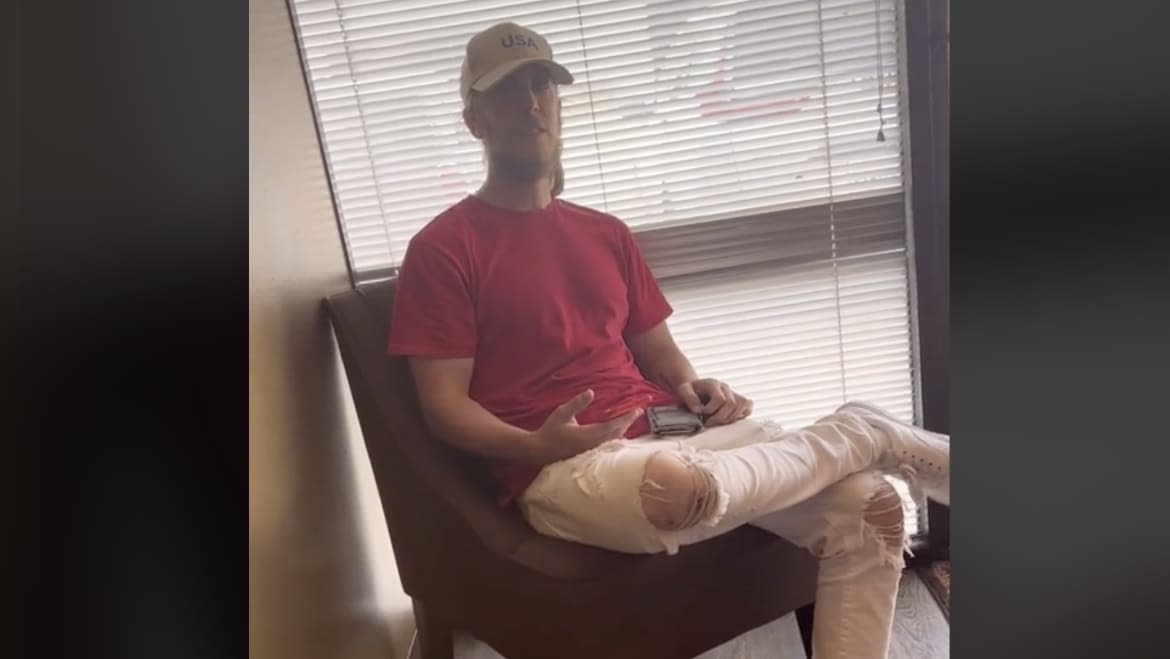 A Black spa owner in Texas said she had to take matters into her own hands Sunday after being racially harassed by a white customer who claimed her “race and class destroyed” his life.

“You ruined my life, my entire legacy of being a Christian,” the man told her in a video that’s since gone viral.

The business owner, who requested anonymity for her own safety, said the incident was particularly unnerving in the aftermath of the massacre at a Tops grocery store in Buffalo, which was carried out by a gunman obsessed with the white supremacist “great replacement theory.” And she was angry that cops never arrived at her salon after she called to report the incident.

In a series of videos that have amassed more than 800,000 views on TikTok, the Dallas-area spa owner recorded the man after he refused to leave.

In the first video, the man, who’s wearing a “USA” cap, sits in the spa’s lobby while having a heated debate with the owner about Jehovah’s Witnesses.

“Please leave my establishment now,” the owner tells him.

The man seemingly taunts the owner by telling her to call the police as he continues to sit.

“You’re judging people and things like that,” the owner says as the man laughs. “Is that funny to you?”

“Yeah, it is. It’s pretty humorous,” he responds.

The man then tells the owner that he has nothing better to do than to waste her time.

“Your race and class destroyed my family and my life,” he says. “You’re playing energy chess with a person that has nothing to do with your class.”

The man continued his racist rant by associating the spa owner with rappers.

“Maybe you could’ve asked me if I wanted to be a rapper or gangster in California,” he said.

The Daily Beast was unable to reach the man for comment.

In an interview with The Daily Beast, the spa owner said the racist customer called the business a few days prior to Sunday to set up an appointment.

The owner claimed he acted weird over the course of a couple of phone calls, but she didn’t give it much attention until he showed up in person. The patron had a 9:15 a.m. appointment on Sunday but arrived at the spa nearly 30 minutes early. During that time, he allegedly started poking around the facility: checking out the windows inside the business, sneaking in and out of rooms that were for employees only, and using the restroom with the door wide open. The owner said he made other clients uncomfortable, so she decided to cancel his appointment, at which point he refused to get lost.

“I do [his] refund, and after that that’s when he still wasn’t wanting to leave,” she said. “He was also making himself [out] as a police officer.”

The owner said she alerted the police that the customer was being unruly. Though she said the police precinct was within a short distance from her business, they never arrived after her call.

“Because I’m a person of color, the system isn’t for me,” the owner said. “It’s for others.”

The Dallas Police Department did not return The Daily Beast’s requests for comment.

The spa owner said she followed up with the police. As of Tuesday afternoon, she said that her report was still in the queue.

“It’s so easy for people to say, ‘I would shoot him, I would do this.’ Yeah, and if I shoot him, guess what? I’m going to court,” she said. “I don’t have that kind of time to waste. The best thing to do is record him, post it, share it. And that way, other people can see exactly what type of person this is and they can see if other people act this way as well.”