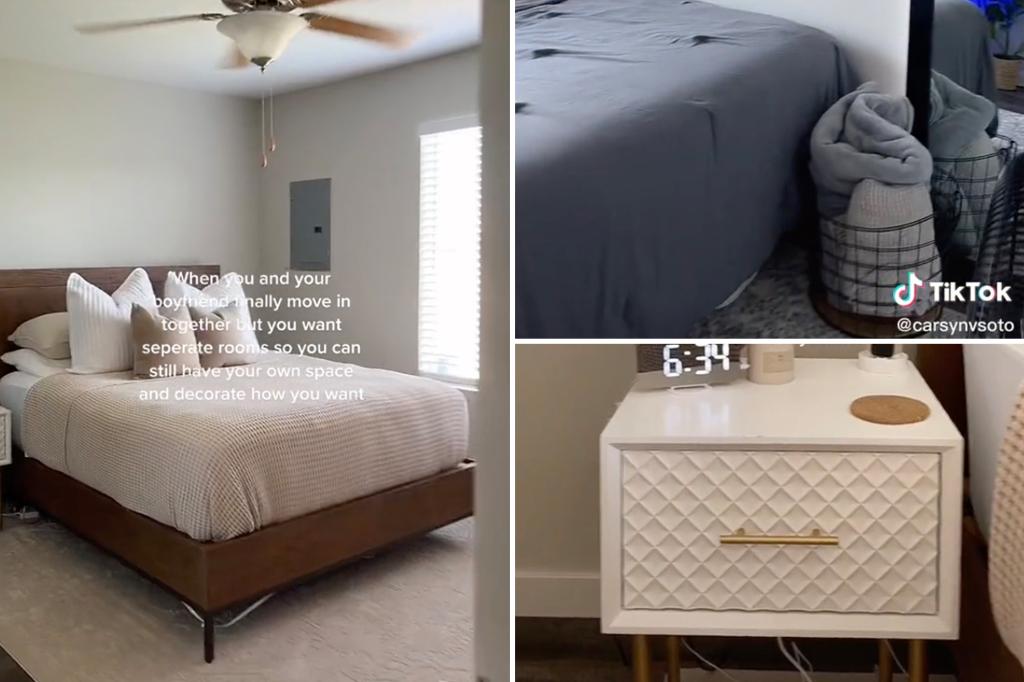 A young American woman has caused a stir online after revealing she has a separate bedroom for her boyfriend.

Dog walker Carsyn Soto, 19, took to TikTok to defend the controversial sleeping arrangement in the apartment she shares with her long-term boyfriend Ben Schmidt.

“When you and your boyfriend finally move in together but you want separate rooms so you can still have your own space and decorate how you want,” she said, sharing footage of their adjacent rooms.

The viral clip received an overwhelmingly positive response online – although some critics claimed the uncommon arrangement was a “red flag”.

Her TikTok was flooded with supportive comments, with many pointing out the arrangement was crucial for shift workers, those who experience mental health challenges, people with unique lifestyles, and those who simply just prefer time alone.

“My boyfriend has ADHD and I’m NT (neurotypical). We have separate bedrooms so he can create as many piles of organized chaos as he wants without driving me crazy,” said another.

“This situation has definitely let my boyfriend and I handle arguments better because we can be in our own energy.

“To be honest, this is great. Sleepovers in each other’s room but still getting your own space” said others.

TikTok users described the individual rooming situation as “healthy”, “genius” and “smart”, with one commenter calling for the “normalization of separate sleeping spaces.”

Others questioned where the custom originated from and why it was still a common expectation of couples.

“Why is it that if you’re dating you have to sleep in the same bed,” she said.

“I’m married and I have my own bedroom and it’s been the best decision ever, I’ve never slept better.”

Prior to the 1950s, separate beds were commonly considered the preferred and healthier sleeping option for couples but were later regarded as a sign of a broken marriage.

Former NRL star Benji Marshall and his podcast host wife Zoe are well-known for having slept in separate beds for over 10 years, with Ms. Marshall telling news.com.au that sleeping apart was “heaven” and prevented a build-up of resentment between the two.

Other iconic celebrity couples including David and Victoria Beckham and Gwyneth Paltrow and husband Brad Falchuk, have been reported to sleep apart, with the Beckhams having separate “his and her sleeping wings” of their home in London.

Relationship psychologist Rachel Voysey said there are many benefits to couples sleeping apart when they “intentionally” choose to do so.

“A good night’s sleep will make you far less irritable, far more empathetic, and in a much better mindset to be in a relationship,” she said.

“There is quite good research to suggest it (sleeping apart) improves communication, when you’re tired your empathy is reduced and you can be less compassionate.”

The expert also revealed sleeping apart can improve a couple’s sex life due to the increased feeling of romance and desire due to space.

“There’s the excitement of coming together, the intimate part of your life can be more exciting, there’s that novelty and fun part,” she said.

The Relationship Room expert said the risk associated with sleeping apart comes from a lack of communication between couples and supplementary “rituals” such as a “good morning cuddle” or something that reconnects the couple after sleep.

Ms. Voysey believes the trending health, “life-hacking” and sleep movement have been a catalyst for the re-evaluation of sleep habits, particularly for people under the age of thirty.

In addition to this, the expert said she had witnessed a shift in expectations of couples and the stigma of sleeping apart.

“Younger couples I see are far less constrained by expectations and norms of relationships, they move away from tradition,” she said while also highlighting the increase in open and polyamorous relationships.

The unconventional sleeping style attracted criticism from viewers who said the arrangement made a partner feel more like a roommate or friend than a person in a romantic relationship.

“Nah it’s weird, stop trying to normalize it,” “never ever”, “red flag” and “tell me your relationship is drifting without telling me,” said commenters on the topic.

One TikTok user, Abigail Jenkins, said she and her partner chose to have separate bathrooms recently which “was life-changing.”

American relationship coach and TikTok influencer Matt Cama shared in a similar video, he and his partner believe “space creates even deeper levels of love and connection in a relationship.”

The couple said they felt it was important for couples to miss and want each other’s company, with more desire and attraction in the relationship.