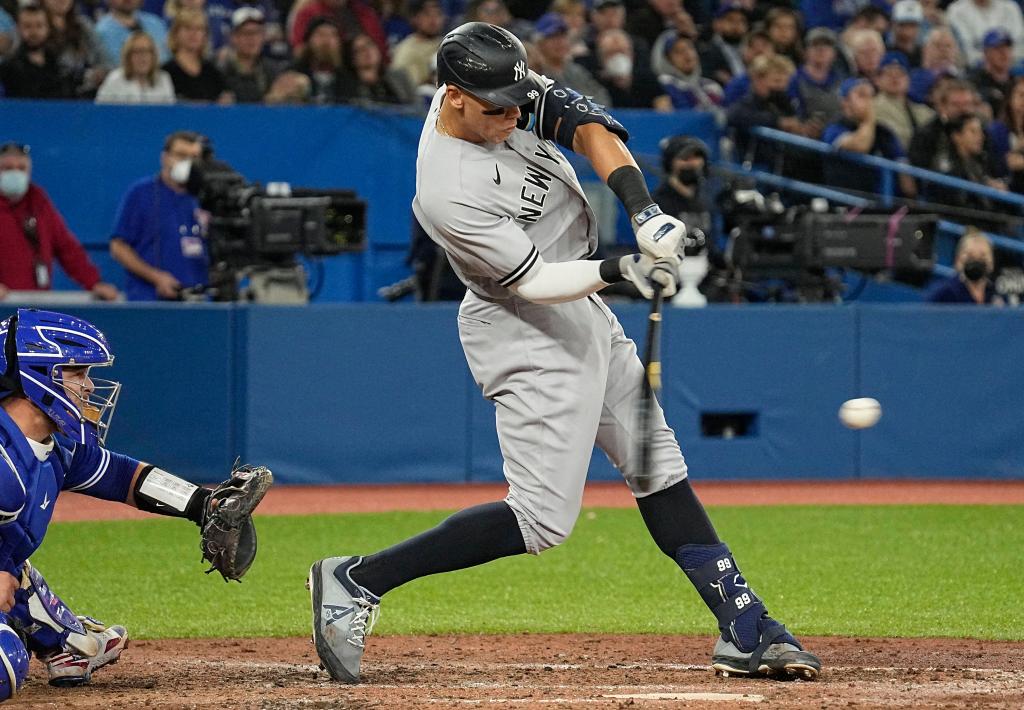 TORONTO — These days, it seems nothing can stop the Yankees — not even emerging Yankee-killer Alek Manoah.

The Blue Jays’ right-hander retired 15 Yankees in a row at one point Tuesday, but the Yankees rode a strong start from Jameson Taillon and a six-run outburst against Toronto’s shaky bullpen in the seventh to win their 11th straight, 9-1, at Rogers Centre.

The winning streak is now their second-longest since 1986, trailing only the 13-game stretch they had last August. The Yankees have also won 13 of 14 to open up a 3 ½-game lead on Toronto in the AL East, with a chance for a fourth-straight series sweep on Wednesday.

Locked in a tight pitchers’ duel, the game was tied 1-1 until Manoah was finished after the sixth inning.

The Yankees didn’t waste time in taking advantage of Manoah’s departure — which coincided with the rest of the Blue Jays falling apart.

Giancarlo Stanton reached on a throwing error by Bo Bichette at shortstop to start the inning against Adam Cimber and scored on Josh Donaldson’s double to the gap in left-center, giving the Yankees their first lead of the night.

Marwin Gonzalez, in a rare start in left, faced Julian Merryweather and added another double to left-center to drive in Donaldson and make it 3-1. Isiah Kiner-Falefa reached on an infield single, played poorly by Bichette, as Gonzalez moved to third.

Jose Trevino grounded to first baseman Vladimir Guerrero Jr. who threw home to get Gonzalez in a rundown between home and third.

Third baseman Matt Chapman eventually got the ball back to Guerrero, who was covering home by then, and Gonzalez appeared to go outside the baseline to avoid a tag from Guerrero — who also looked to have tagged Gonzalez — but home plate umpire Ron Kulpa missed the call and Gonzalez managed to score.

Aaron Hicks, who reached base four times, followed with a single to left to knock in Kiner-Falefa and Aaron Judge delivered the Yankees’ third run-scoring double of the inning for a 7-1 lead.

A two-run blast by Stanton in the ninth made it 9-1.

The Yankees nearly got to Manoah in the top of the first.

Hicks led off the game with a walk. Judge struck out before Anthony Rizzo’s single to right sent Hicks to third.

But with runners on the corners, Stanton struck out and Donaldson grounded out softly to Manoah.

Taillon pitched around a one-out double by Bichette in the bottom of the inning and a leadoff single by Raimel Tapia in the second. Guerrero opened the bottom of the fourth by hustling to second with a double, but Taillon got the next three batters.

The Blue Jays finally broke through against Taillon in the fifth.

Alejandro Kirk started the rally with a one-out double to right. Taillon struck out Santiago Espinal for the second out before George Springer reached on a catcher’s interference by Trevino and Bichette singled to left to score Kirk from second.

With runners on first and second, Guerrero grounded to second to keep it a one-run game.

And following Rizzo’s first-inning single, Manoah retired 15 straight hitters before Hicks singled to left with one out in the sixth.

With Judge at the plate, Hicks was thrown out trying to steal second. Judge answered with a rocket homer into the second deck in left to tie the game at 1-1.

The 114 mph laser was Judge’s ninth of the year and came with Judge 0-for-10 with four strikeouts against Manoah in his career prior to the at-bat.

The Yankees got Manoah out of the game after six innings and 91 pitches. After the right-hander’s most recent performance, he has a 1.52 in four starts against the Yankees.

Taillon, meanwhile, had his best start of the year, allowing just one run over six innings.