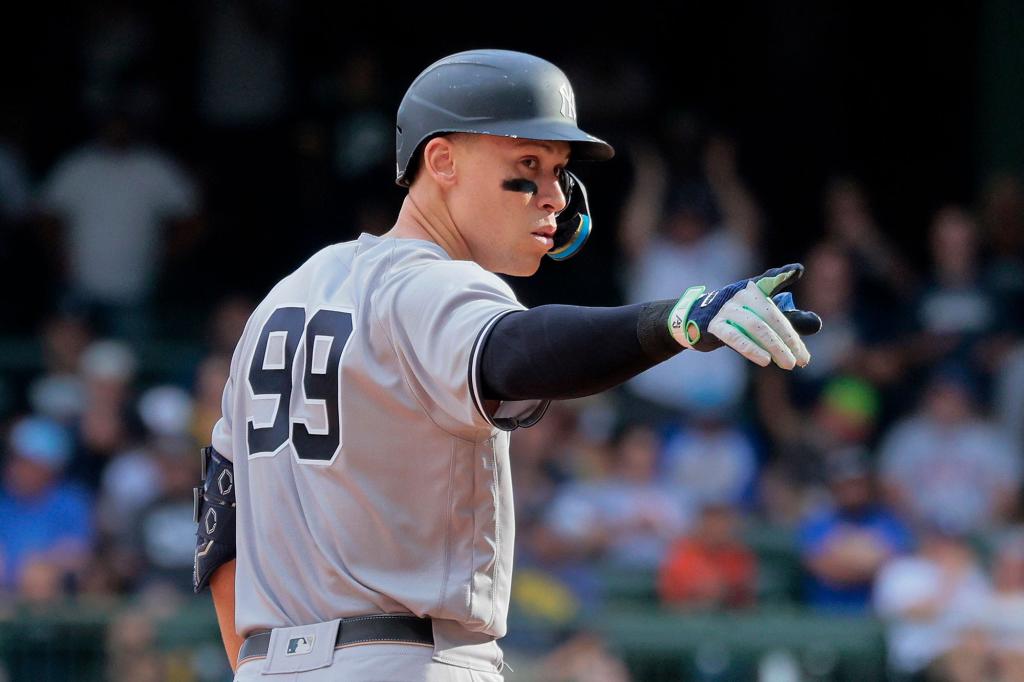 Aaron Judge is the biggest thing in baseball and is having one of the historic seasons in the game’s history.

But does he have enough power to save MLB from streaming?

We are about to find out, because with Judge at 59 homers, he is staring at a Friday and Apple TV+ exclusive stream of the Yankees-Red Sox game with potentially historic implications.

If it happens, the booth of Stephen Nelson, Hunter Pence and Katie Nolan will have a chance to put their signature on the moment.

While the Apple TV+ games are free, there is a segment of the audience — presumably older — who dearly care about seeing Roger Maris’ record being tied or broken and still are likely having a little trouble accessing it.

An MLB spokesman said there is no plan to change the broadcasting schedule.

The rest of the week lines up better with YES having the games versus the Pirates on Tuesday and Wednesday. On Thursday, Fox will have Yankees nationally, followed by Apple on Friday. YES and MLB Network will have Saturday. ESPN’s “Sunday Night Baseball” has the honors to end the week.

Sterling to cross the border

John Sterling will now do all the Yankees’ games on WFAN from here through the end of the postseason. Sterling, 84, had cut back on his travel schedule in the second half of the season and YES/ESPN’s Ryan Ruocco had agreed to do the games next week in Toronto.

At the end of last month, Ruocco proactively reached out to WFAN head honcho, Chris Oliviero, to see if he were still doing those games with Judge approaching Maris’ record of 61 homers, Oliviero said. With Sterling having an aversion to crossing the border, Oliviero said that Ruocco was good to go.

Everything to know about Aaron Judge and his chase for the home run record:

Last week, Sterling called Oliviero wanting to do the Toronto series that begins Monday. Ruocco understood and stepped aside. In a classy (and the right) move, Oliviero will still pay Ruocco for the three games.

Judge can bring this little data point into his free-agency negotiations. YES’ ratings are up 22 percent this season in total average viewership (350,000 vs. 286,00). Of the 113 games on YES thus far this season, 35 games have averaged more than 400,000 viewers. These are the best numbers in baseball and the highest for YES in 11 years. You can’t attribute it all to Judge. The Yankees did start the season playing the best in baseball, but he has become must-watch TV.

He’s only going to grow bigger, as whatever he does in the coming weeks and postseason combined with what will be potentially be a historic contract will make his at-bats even larger in the coming years.

For its Thursday game, Fox Sports has made a switcheroo, subbing in its No. 2 MLB play-by-player Adam Amin for Aaron Goldsmith. Amin will be joining John Smoltz on the call with Ken Rosenthal on the sideline. … The other issue with the Apple TV games on Friday nights as opposed to the other outlets, it makes it difficult for bars and restaurants to stream games. … MLB Network will be airing live look-ins every time Judge bats. On the Saturday game, Bob Costas and Tom Verducci will be in the booth with Jon Morosi on the sidelines.