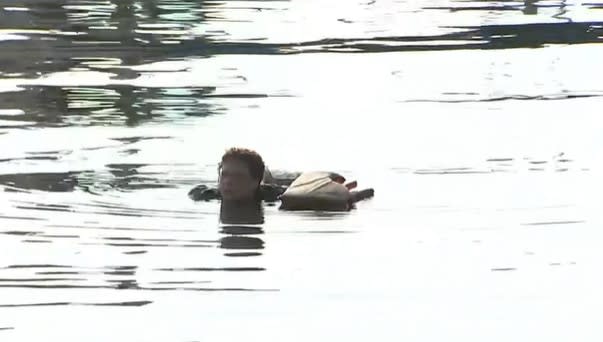 A packed Orange Line train transporting commuters on a bridge that runs over the Mystic River in Somerville caught fire on Thursday morning, sending hundreds of people scrambling for safety.

Video shared with Boston 25 News showed flames shooting from a train car and thick smoke billowing into the air. An MBTA spokesman said the train was approaching Assembly Station when it caught fire around 6:45 a.m.

About 200 people were forced to evacuate the train, including a woman who jumped into the river and others who climbed through smashed windows.

The woman who jumped off the train bridge swam to shore and declined medical attention, according to the MBTA. There were no other injuries reported.

Shortly after 10:30 a.m., the MBTA announced that regular service on the Orange Line had resumed.

In a statement, the MBTA said:

This morning, an Orange Line train reported flames & smoke coming from its head car as it traveled across the bridge between Wellington & Assembly stations. MBTA & emergency personnel quickly responded, shutting down power, and safely assisting ~200 passengers from the train. A preliminary inspection indicates a section of the sheet metal, or side panel, on the vehicle, appears to have come in contact with the third rail, igniting material below the car. We will be transparent with our findings and will provide updates as they become available. We are deeply disappointed that this incident occurred and sincerely apologize to our riders who were on the train, as well as to our ridership as a whole. With a more extensive inspection already underway, we will take every necessary step to prevent this from happening again. We understand that this and other recent incidents have tested our riders’ and the public’s trust. We remain committed to prioritizing safety and reliability to deliver the service our riders deserve.

During an afternoon news conference, MBTA General Manager Steve Poftak announced that a metal sill broke off the lower section of the train and it made contact with the third rail, “causing an ignition.” He called this latest incident “incredibly frustrating.”

Poftak noted that the train in question was last inspected on June 23, 2022, and first put into service in 1980.

John Gosselin, who is staying at the nearby Encore Boston Harbor, happened to be looking out of his hotel window as the chaotic scene unfolded.

“The train stopped and sparks starting coming out of the front, probably about three feet behind the driver,” Gosselin explained. “I saw a flame and then I knew something was up…It engulfed very, very quickly. The flames were shooting up. The smoke got very black.”

Video shared by Vladi Ramos, a passenger on the disabled train, showed commuters running down the tracks to get away from the fire.

Another passenger, Gerardo Saenz, said people were “definitely freaking out.” He added that other riders were helping people remain calm.

The Federal Transit Administration and the National Transportation Safety Board were notified. The MBTA’s track and power departments are inspecting the infrastructure.

Boston Mayor Michelle Wu issued a statement, saying, “Today’s incident on the Orange Line is more evidence of an aging transit system in crisis.” She also vowed to work with the state to transform the “broken” transit agency.

In June, all new Red and Orange Line trains were pulled from service after an out-of-service car experienced a battery failure in the Wellington Yard.

The FTA said in a recent report that investigators found the MBTA to be short-staffed to the point where trains were not safe for riders.

Poftak said last week that the agency is taking steps to alleviate staff shortages and to ensure better track conditions.

An investigation into the incident remains ongoing.

See a slideshow of images below from the video captured by Vladi Ramos.

This is a developing story. Check back for updates as more information becomes available.