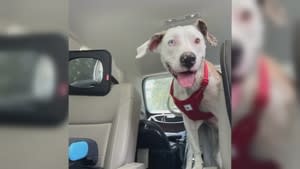 A Lake County woman says she’s facing a $500 fine after she tried to rescue a dog.

Hunter File says she was just trying to do the right thing when she was on her way to Publix on the fourth of July and saw a dog in the middle of the road.

“There’s no way you could just leave a dog,” File said.

The mother of three says she took the dog home for the night, but wasn’t able to keep it.

“I ended up contacting Lake County Animal Services and they would not pick the dog up because I found the dog in Orange County,” File said.

File says she attempted to contact Orange County Animal Services, but they took several days just to call her back.

When another attempt to meet with representatives of the Orange County Shelter fell through, File says she posted the lost dog to Facebook then took it back to the Lake County Shelter, closer to where she lives.

“We live so close to the border of Orange County and Lake County,” File said. “Lake County is closest to me. That’s what seemed natural to me.”

Days later, File was slapped with a $500 fine due to her providing false information to animal control about where the dog was found.

“I was just trying to be a good citizen and turn a dog in to a shelter conveniently located to me.”

File admits she lied on the intake form and said the dog was found in Lake County.

When asked how they learned File had lied, Animal Services released a statement saying, “Without discussing details, we have a good relationship with law enforcement.”

The shelter wouldn’t say how often they issue similar fines.

File has a hearing scheduled for September 1st, unless she decides to pay the fine before that.