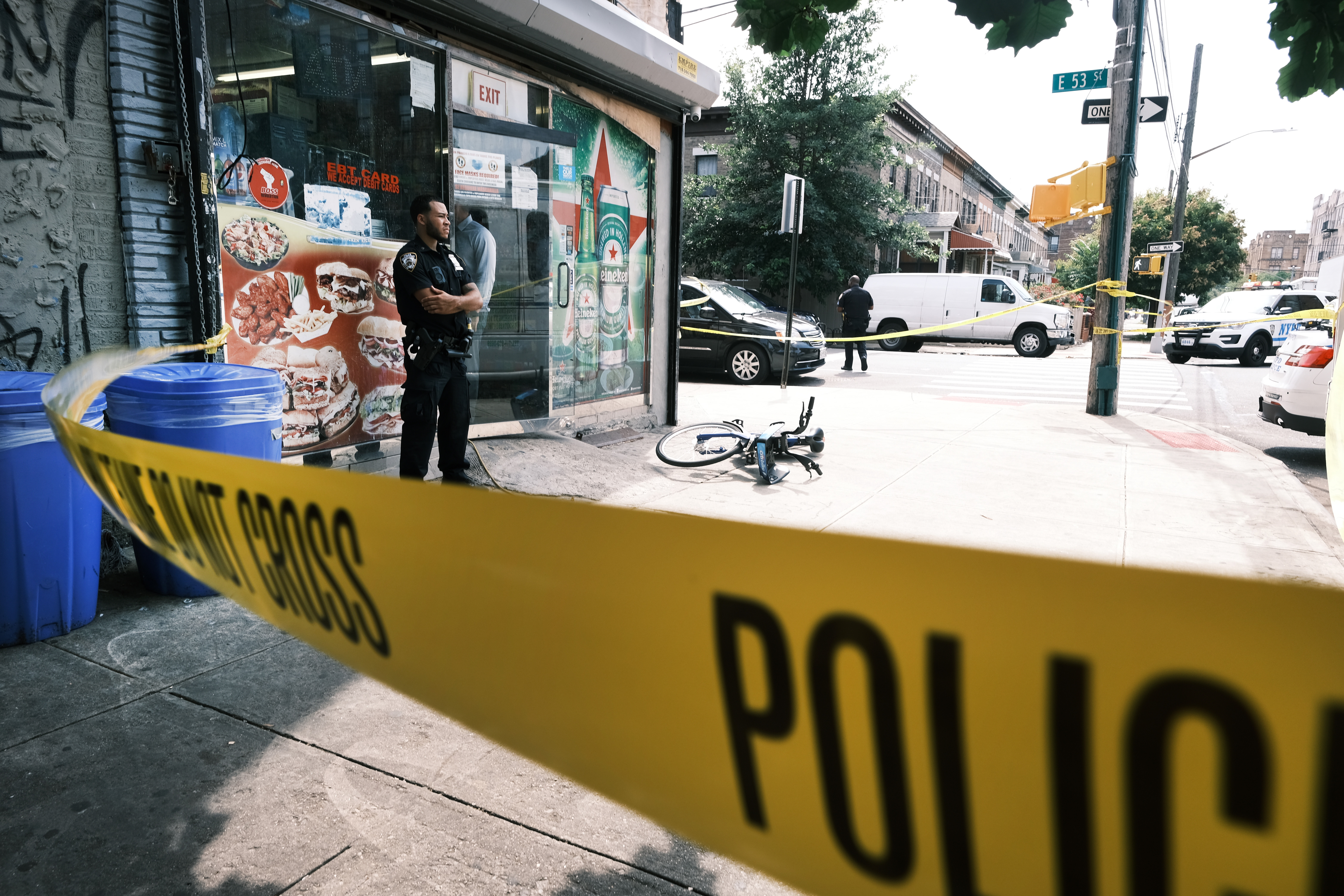 Their discord is part of a larger battle over how to balance equity amid rising crime nationwide, an issue that has divided the party and set back the reform movement launched by the death of George Floyd. And New York’s bail laws were thrust into the fore by a recent incident involving Rep. Lee Zeldin, the Republican nominee for governor, who was publicly attacked by a man who was swiftly released from custody.

America now looks to New York as the proving ground for criminal justice reforms — and sees a moderate Democrat at war with his own party.

“Our criminal justice system is insane. It is dangerous. It’s harmful. And it’s destroying the fabric of our city,” Adams said this month as he continued to push Hochul and lawmakers to rescind their two-year-old reforms. “As a result of this insane, broken system, our recidivism rates have skyrocketed.”

New York passed the sweeping bail reform law in 2019, prohibiting cash bail for all but the most serious misdemeanors and felonies. State judges cannot hold defendants based on their perceived dangerousness, and are only required to use the least restrictive means of ensuring defendants return to court. The reforms quickly ignited a firestorm, and state lawmakers rolled back portions of the law in 2020 just months after enactment, and again this year.

But they’ve rejected Adams’ demands for a special session in Albany to pass even stricter pretrial detention. The mayor, who has been scrambling to combat a stubborn spike in crime after running on the issue last year, also wants more teens charged as adults in serious crimes, rolling back a 2017 law.

“We never said that the cause of crime in the state is because of bail reform,” Hochul, whose reelection Adams has endorsed, said at a gun-safety announcement the day after Adams called for a special session. “That is too simplistic. That is a political slogan.”

‘I don’t know why we hire lawyers’

Adams, whose moderate stances and law-and-order agenda often endear him to state Republicans, is relying on surgically sliced NYPD crime stats to demonstrate a rise in rearrests to support his calls for stricter bail laws and more judicial discretion.

Hochul and the Democratic leaders in the Assembly and Senate are meanwhile using the state court system’s figures, which they say paint a much different picture.

Earlier this month, the mayor unveiled data showing that rearrests for certain crimes have risen in the last five years.

Relying on NYPD figures, Adams said the share of people arrested for burglary who went on to be arrested for another felony within 60 days rose from 7.7 percent in 2017 to 25.1 percent in 2022. The mayor said that works out to 393 rearrested this year, though the math actually puts it at 373.

Felony rearrests for defendants accused of grand larceny similarly rose for that period, from 6.5 percent to 16.8 percent — or 310 rearrests this year. The rearrest rate for accused car thieves increased from 10 percent to 20.3 percent, to 125 this year. For petit larceny — crimes like shoplifting — it rose from 8.1 percent to 21.2 percent compared to five years ago. The mayor did not provide baseline figures for petit larceny.

Before bail reform laws took effect in 2020, judges had discretion to set bail for those crimes. Now, they cannot — except for first-degree grand larceny.

Adams also released a list of the city’s top 10 reoffenders. He wouldn’t name the recidivists, but the New York Post named one in an exclusive story published not two hours before Adams’ press conference.

“I don’t know why we hire lawyers,” Adams said later that day, when asked why he wouldn’t publicly identify members of the rogues gallery himself.

The mayor’s accounting may be striking, but he is relying on anecdotes and “cherry picking data,” according to state Sen. Michael Gianaris (D-Queens), a sponsor of the original bail reforms.

And since the bail laws took effect in 2020, it’s harder to argue the correlation is also causation, especially because Adams’ numbers don’t indicate how many people rearrested in 2017 were even assigned bail.

Some could have been let go under a judge’s discretion or assigned a bail amount that they paid before allegedly reoffending, according to Gianaris.

“The data is pretty clear and unambiguous that the rates of reoffense by people who are out pending charges … has not changed,” Gianaris said in an interview. “They’re taking statistics about the broader crime increase, which nobody disputes, and laying it at the feet of bail reform. And they make no logical connection between the two.”

Crime has risen nationwide since the onset of the Covid-19 pandemic, which coincided with bail reform taking effect in New York, even in cities that did not change their bail laws.

The city would not provide a fuller dataset in time for publication and said it chose 2017 because that was one of the safest years in city history at a time when the worst policing abuses, such as widespread stop-and-frisk, had been reined in.

Critics say Adam’s NYPD data is unreliable, however, because it only reflects arrests, not charges pursued in court. Most arrests are ultimately dismissed, and police tend to “inflate” arrest rates and charges, contends Amanda Jack, an attorney with the Legal Aid Society.

According to figures published by the New York State Unified Court System, people released without bail reoffend at similar rates to those who are assigned bail and pay it, suggesting bail is not a deterrent.

On average, the rate is a little under 20 percent over the last two years, the data shows. Since 2020, an average of 9.6 percent of people arraigned for a crime statewide were rearrested and arraigned on a misdemeanor. Seven percent went on to be charged with a subsequent nonviolent felony, and 2.8 percent were rearrested and arraigned on a violent felony, according to state court figures.

Rearrests are also dropping — 23 percent of defendants arrested statewide in 2020 were rearrested on another charge. Last year, that figure dropped to 19.5 percent.

The state only began tracking repeat arrest data when bail reform took effect, making it impossible to make comparisons with the time before the overhaul.

In a bid to rectify the discord between Adams’ figures and the state’s, Assembly Speaker Carl Heastie, also a moderate Democrat, invited the mayor to compare notes.

“To this point, I still haven’t received anything from Mayor Adams in terms of data,” Heastie said last week.

Heastie has also pointed to surging crime across the country, even in jurisdictions that did not enact major criminal justice reforms.

“Crime is up all over the country even higher than here in the state of New York. We are getting through the nationwide pandemic that has an effect on things,” he said. “People don’t want to talk about all these things. All they want to talk about is bail reform, bail reform. Because I believe that some people want to use it for political purposes. And I believe that it’s an easy thing to blame.”

Adams did not immediately respond to a request for comment on the criticism.

The two rollbacks to bail reform have granted judges more discretion. Now Hochul and others say they need to use it.

Under the reforms, judges may set bail for a felony or more serious misdemeanor that causes identifiable harm to a person or property if the crime was allegedly committed while the defendant was out on pretrial release for the same class of infraction.

This year, lawmakers added theft to that provision, making repeat shoplifters eligible for bail. However, the rule doesn’t apply if the theft is considered “negligible.” The provision applies only to alleged offenders with pending cases, not those with past criminal records.

Under tweaks to the state bail law that passed this year, judges should also consider whether a defendant is accused of doing serious harm to someone and whether they have a history with illegal guns.

Hochul has floated continuing education for judges so they’re aware of all their options.

On Friday, she ordered the arrest of a Bronx man who was released without bail after allegedly sucker-punching a man who ended up in a coma.

Police charged the man, a sex offender, with attempted murder, but the Bronx District Attorney’s office chose to instead pursue a misdemeanor assault and harassment charge, and the man was released without bail.

The court failed to hold him on a parole violation, the governor said, as she ordered his capture.

“This is a person on lifetime parole, and as of minutes ago, that person is now in custody. That is at my direction,” she said.