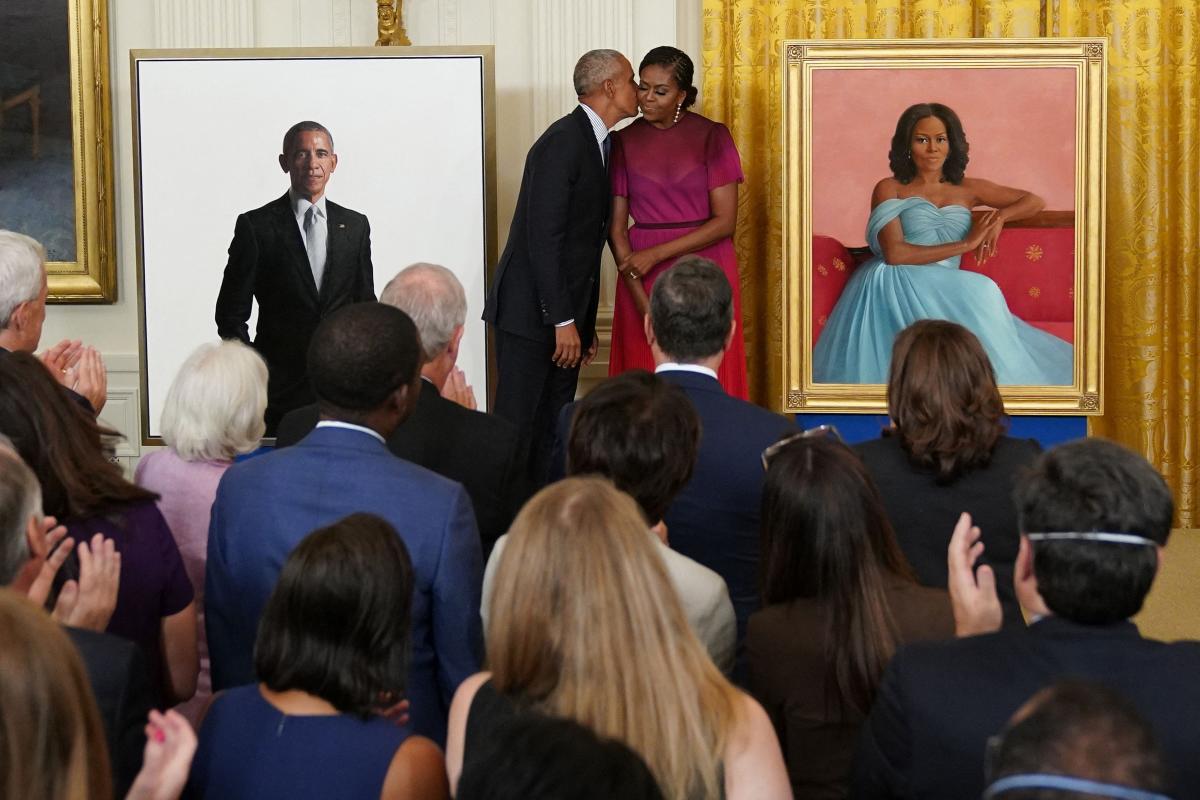 WASHINGTON – As the nation’s first Black president, Barack Obama made history. His official portrait, unveiled at the White House Wednesday will do the same.

Robert McCurdy, the artist Obama chose for his portrait, is known for his photorealistic oil paintings with unusually sparse backgrounds in which the subject holds no props, makes no gestures and doesn’t smile.

Obama, dressed in a black suit with a grey tie, stands prominently at the center of the canvas.

The less that’s added to the painting, the more the viewer will bring their “emotional and historical package” to their viewing, McCurdy believes.

“It will be different for every single one,” he said in a podcast interview with the White House Historical Association, which oversees the portrait process. “We’re telling as little about the sitter as possible so that the viewer can project onto them.”

The connection the viewer makes with McCurdy’s portraits appealed to Obama, he said at the unveiling, “in part because presidents so often get airbrushed.”

“What I want people to remember about Michelle and me is that presidents and first ladies are human beings, like everybody else,” Obama said.  “We have our gifts. We have our flaws.”

McCurdy, who has also painted Nelson Mandela, Muhammad Ali, Jeff Bezos and Jane Goodall, had hoped one day to add Obama to that list. When the White House reached out to him, it saved McCurdy the trouble of asking.

Former First Lady Michelle Obama chose artist Sharon Sprung, who describes her work as contemporary realism. She’s depicted in a blue dress, seated on a sofa in the Red Room.

Stewart McLaurin, president of the White House Historical Association, said both portraits are “strikingly different” than any of the others hung before.

Unlike at the start of the nation when Americans learned what their presidents looked like through paintings and drawings, today’s media is saturated with images of the White House occupants.

“In an era when we think we know our presidents and first ladies so well, this is something that they get to choose that reflects them,” McLaurin said. “And yet we learn more about them in doing so.”

In the last presidential portrait before Obama’s, George W. Bush, painted by Texas artist John Howard Sanden, is shown standing in the Oval Office. Behind Bush is one of his favorite paintings, W.H.D. Koerner’s “A Charge to Keep.” Bush put that same title on the campaign book he published as governor of Texas ahead of his 2020 presidential campaign.

Bill Clinton was the first president to choose a Black artist for his White House portrait. Simmie Knox painted both the president and First Lady Hillary Clinton. Knox was proud of how Bill Clinton’s eyes lock on the viewer and appear to move with the viewer across the room, according to The New York Times. His depiction of Hillary Clinton features the china she selected to celebrate the White House’s 200th anniversary as well as a copy of her book, “It Takes a Village: And Other Lessons Children Teach Us.”

As in the painting of his son, George H. W. Bush is standing in front of another painting in his official portrait. George P.A. Healy’s “The Peacemakers” depicts President Abraham Lincoln discussing peace terms with his military leaders shortly before the fall of Petersburg, Virginia. The likenesses of Lincoln and Lt. Gen. Ulysses S. Grant – who went on to become president – are obscured, perhaps to ensure Bush is the only featured president in the painting. During Bush’s administration, the painting hung in the Treaty Room, the second floor room in the White House that Bush used as a private study.

The Obamas’ portraits, President Joe Biden said Wednesday, will hang forever on the walls of “the people’s house” as a reminder “that hope and change matter.”

Biden had the rare opportunity of hosting his former boss for the unveiling ceremony. The recent tradition of the current president honoring his immediate past predecessor was broken during the Trump administration.

Donald Trump’s friction with Obama includes Trump’s years-long refusal to acknowledge Obama was born in the United States. As president, Trump tried to roll back much of Obama’s legacy.

White House press secretary Karine Jean-Pierre declined to say Tuesday whether Biden will host an unveiling ceremony when Trump’s portrait is ready. She deferred questions to the historical association.

McLaurin said the artists for the Trumps’ portraits have been chosen. How they will be unveiled when they’re done is “really up to the current president and first lady and the subject of the artwork,” he said.

“It’s purely a modern thing that they’re doing these reveal events, and they vary from time to time,” McLaurin said. “There’s not a prescribed way to do it, or time to do it.”

Return to the White House

The Obama’s visit to the White House Wednesday is the second time the former president has returned since leaving office. It’s the first trip back for Michelle Obama.

McCurdy said Barack Obama was “very present and easy to work with” when sitting for the dozens of photographs taken as a template. Painting an image takes McCurdy 12 to 18 months, concluding when the work “stops irritating me.”

Sprung, who worked on her portrait of Michelle Obama for eight months and is known for her jewel-like color palettes, said the most difficult part was the dress.

“The color was so beautiful and I really wanted to get the strength of the color and the light,” Sprung told McCurdy in an interview for the historical association’s podcast.

The association has had an active role in acquiring and donating portraits of recent presidents and first ladies since it negotiated to acquire a portrait of former First Lady Eleanor Roosevelt in 1965.

In recent years, artists are chosen before the first family leaves the White House.

A different set of presidential portraits are created for the National Portrait Gallery.

In the former president’s portrait, he sits in a chair, arms folded, emerging from a lush green background. Flowers in the foliage represent aspects of his past, such as jasmine from his native Hawaii and chrysanthemums, the official flower of Chicago.

In her portrait, Michelle Obama gazes straight at the viewer, her geometric-patterned dress popping out against a light blue background.

The Obamas’ White House portraits will initially be displayed on easels in the East Room.

“I suspect that, beginning tomorrow, these two portraits will be the most photographed by visitors from across the United States of America,” John Rogers, chairman of the historical association’s board of directors, said at the unveiling.

Traditionally, the portraits of the two most recent presidents hang in the entrance hall. If the Bidens continue that practice, Obama’s portrait will replace Clinton’s in the hall, joining George W. Bush’s.

Just as Obama’s painting will look different than Bush’s, future portraits may continue to break new ground. They may not even be paintings.

“Maybe one day we’ll have a digital portrait of a president. They won’t want oil on canvas,” McLaurin said. ” You know, there’s no law that says these have to be this kind of medium.”