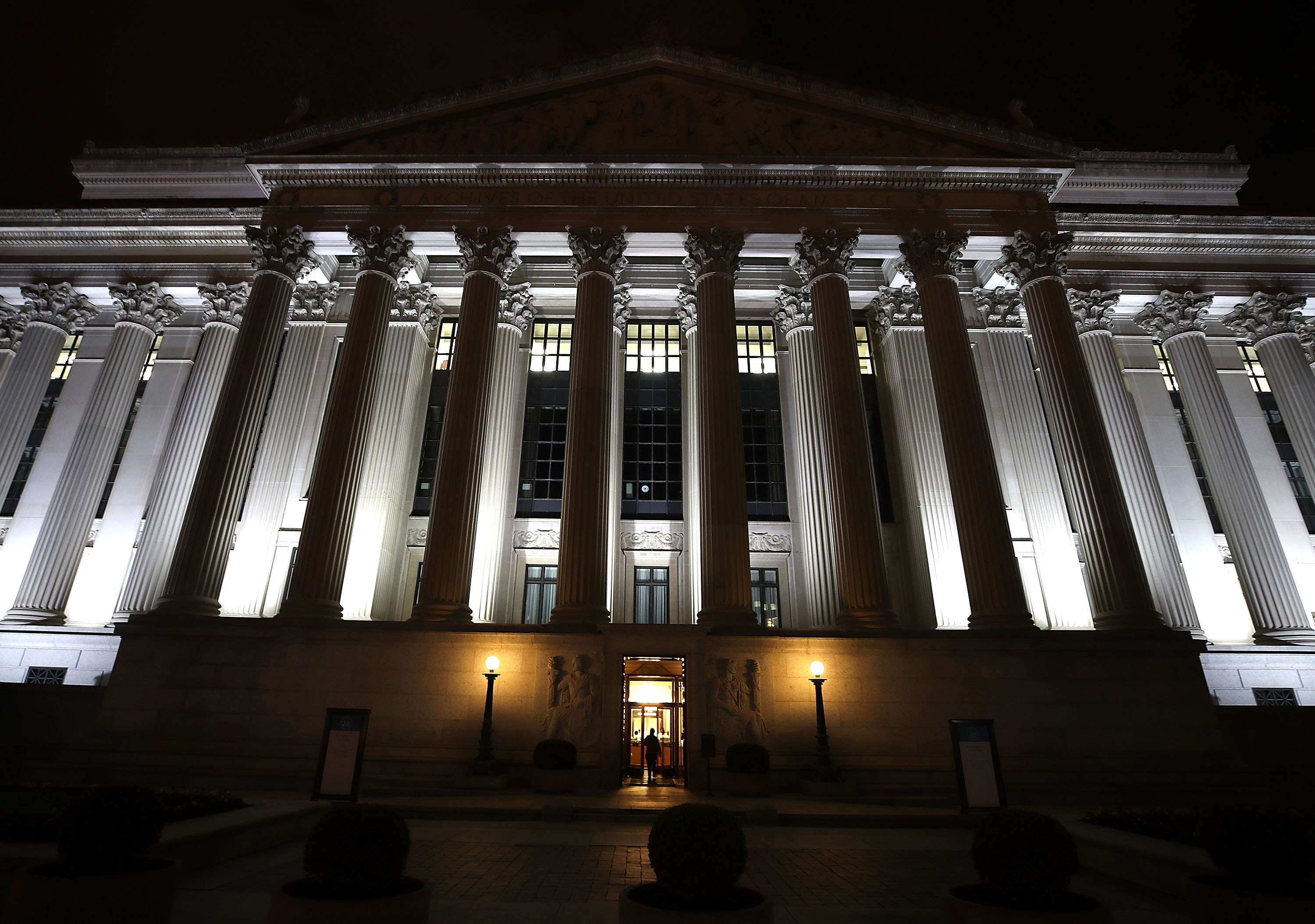 The initiative comes amid extraordinary scrutiny over the proper management of classified documents as the Justice Department investigates former President Donald Trump for allegedly mishandling sensitive national secrets after leaving the White House.

Top military officials, for example, have called for loosening some restrictions on foreign threats — gathered by human spies, satellites or other collection tools — so that more government agencies, contractors and foreign governments can better coordinate military and diplomatic responses.

It’s also about making the national security bureaucracy more transparent to the American people, particularly past government actions — including potentially illegal activities — that have been shielded from the public for decades.

“It’s in our nation’s best interest to be as transparent as possible with the American public regarding U.S. government records and activities,” said an administration official privy to the review process. “We will look at how technological advancements can speed declassification … and permit greater information sharing.”

It remains to be seen how willing President Joe Biden is to go to battle with the CIA, the Pentagon and other intelligence agencies that have resisted his predecessors’ attempts or watered down their executive orders to compel them to share more information with other agencies and the American public.

“Modifications to the declassification executive orders generally happen at gunpoint for the intelligence agencies,” said Kel McClanahan, executive director of National Security Counselors, a non-profit public interest law firm that specializes in national security cases and has advised intelligence agencies. “The same people who screamed bloody murder before will be arguing against it.”

The year-long review marks the first such attempt to rein in the classification system in more than a decade, after what insiders and oversight authorities say has been frustratingly little progress since the Obama administration took on the task.

The National Archives and Records Administration estimates that government agencies create petabytes — or millions of gigabytes — of classified information each year, a trend that has only increased in the decades since the Sept. 11, 2001 terrorist attacks on the United States led already tight-lipped agencies to clamp down more.

“We believe there is immense potential to improve government efficiency and transparency simultaneously within this effort,” stated an internal June 2 memo from Yohannes Abraham, the executive secretary of the National Security Council.

A major focus, he said, is “revising or replacing” Executive Order 13526 that was issued by President Barack Obama in 2009 setting the parameters for classified national security information.

Up for review are the criteria for classification, how much is spent on declassification, and a reconsideration of what qualifies for the highest levels of protection, such as “special access programs,” the memo added.

The review is also scrubbing Executive Order 13556 governing “controlled unclassified information” that Obama also signed in 2010 — but was also widely considered to have fallen short of the goal of forcing into public view more government files.

Helping to advise the effort is a critic of what many consider to be an epidemic of over classification, current and former officials said.

John Powers is the associate director for classification management at the Information Security Oversight Office at the National Archives and Records Administration, which advises the president on the security classification system and has been advocating for reducing secrecy.

Powers also worked at the National Security Council from 2015 to 2018.

The National Security Council did not respond to multiple requests for comment on Powers’ role. But the administration official confirmed he “is part of the team that is working on this.”

Powers did not respond to several requests. But he told POLITICO in an interview last year that he believes “the classification system is a beast at this point.”

“It’s 80 years old and we’re still trying to turn a battleship but we haven’t turned it,” he said. “And our national security threats are really completely different now and we have not reacted in a way we should.”

His role in the effort is seen by advocates for government transparency as signaling a strong desire for reform.

“Not only is he bullish on transparency, but he knows the system from the inside,” said Steven Aftergood, who ran the Project on Government Secrecy at the Federation of American Scientists from 1991 to 2021. “And he has a sense of where change is feasible and where things that sound like good ideas might not be quite realistic.”

“If you are out of touch with the reality of the bureaucracy, your enthusiasm is not going to translate into practical changes.”

Director of National Intelligence Avril Haines, who oversees all spy agencies, testified to Congress in May the system also hampers Washington’s ability to share information more widely inside the government and with allies to confront quickly evolving threats.

The Biden administration took unprecedented steps to declassify information about Russian activities in the weeks leading up to its February invasion of Ukraine, despite pushback from leading elements in the spy community.

“I think there are lessons to be learned from Ukraine,” Haines told the Senate Armed Services Committee. “I do think it has helped other people understand the value of ensuring we are classifying things at the appropriate level. And how declassification can support foreign policy in different ways. And that’s all to the good.”

Top military officers have also been pressing in recent years for ways to share more classified intelligence with allies.

Haines has assured senators that she is taking steps on her own “to improve the declassification process,” as she wrote in a January letter to Sens. Ron Wyden (D-Ore.) and Jerry Moran (R-Kan.), who have been pressing Biden for reforms.

“The failures of the current obsolete system have been extensively documented,” they wrote to the president in May, urging him to “begin the process of updating the executive order governing classification and declassification.”

“We spend $18 billion protecting the classification system and only about $102 million … on declassification efforts,” Sen. Elizabeth Warren (D-Mass.) said in an exchange with Haines at the May hearing. “That ratio feels off in a democracy.”

“It is a very challenging issue,” Haines acknowledged. “There are technical aspects, there are cultural aspects to it.”

Haines’ office declined a request to discuss her expectations for the new NSC initiative. But her role in the process is another hopeful sign for open government advocates.

She has “such influence over how the rest of the government operates,” said Lauren Harper, director of public policy at the National Security Archive at George Washington University. “I think that will give a lot of momentum if they are the ones pushing for good classification reform.”

Aftergood, McClanahan and Harper are among a coalition of experts in national security law and government secrecy that is calling for a series of landmark changes in the new executive order.

Among their top priorities are requiring that secret documents be declassified after 40 years and that major new investments be made in technology to help review, process and make available declassified documents.

They are also advocating for more specific steps, such as mandating unclassified summaries be released of the president’s daily intelligence briefing, releasing all or portions of the classified legal opinions from the Justice Department’s Office Of Legal Counsel, and the collection and release of the CIA’s files on the torture program it initiated after the 9/11 attacks.

Powers has also been working closely with the Public Interest Declassification Board, the bipartisan advisory panel also housed at the National Archives that has been hammering Biden to declassify more secrets.

It has recently lobbied for the release of records related to the 1963 assassination of President John F. Kennedy and environmentally disastrous nuclear tests during the Cold War that continue to make generations of Pacific Islanders ill.

The members, who are appointed by the president and Congress, told Biden last year that “our classification and declassification system is in crisis and near failure.”

“Modernizing this system is an imperative for our national security and for our democracy to operate effectively in the digital age,” they wrote.

But previous efforts have made little impact, according to board member Benjamin Powell, a former general counsel in the Office of the Director of National Intelligence during the George W. Bush administration.

For example, while the 2009 executive order “provides the authority for agencies to establish declassification centers, agencies have generally chosen not to establish such centers,” he said at a public meeting of the board on Friday.

Those are considered particularly important for coordinating the review of classified documents for public release, which often requires multiple agencies to sign off.

“The tools that we have to increase public transparency need to be modernized,” the board’s chair, Ezra Cohen, who served as the Pentagon’s acting undersecretary for intelligence in the Trump administration, said at Friday’s public hearing. “Some of this can be solved through technology, but there are also major systematic changes that need to be made.”

A new presidential order with teeth is seen as the best lever to force greater transparency.

“Every aspect of [the classification system] is being looked at to try to make it more understandable, more accessible, and make sure that we get more things that should be in the public domain at the earliest possible time,” said John Tierney, another member of the Public Interest Declassification Board and a former Democratic chair of the House Oversight and Government Reform Committee’s national security panel who has been briefed on the progress.

Some of the key questions that need to be addressed, he said, range from “are matters over classified and what leads to that” to whether current classification levels — such as secret, top secret and other designations that further limit access — are “too numerous and should they be narrowed down and focused?”

But like others, he is anticipating a major clash with the CIA, Pentagon and other national security agencies.

“The intelligence community in particular routinely pushes back on any effort to restrict or narrow their discretionary authority over classification matters, and would no doubt do so here as well,” said Bradley Moss, an attorney who has sued spy agencies to release documents under the Freedom of Information Act. “No real overhaul has happened since the Clinton administration. Both Presidents Bush and Obama made minor revisions on the periphery but nothing more.”

“FBI and CIA in particular are always very conscious of sources and methods and trying to protect those,” Tierney added. “They define those rather broadly,” including “documents that are very old, about people who may be long dead. And the question is ‘who are we protecting?’”

Aftergood said he was a bit disappointed that the memo kicking off the White House effort doesn’t lay out a clearer vision — and send a stronger message of intent.

“I thought it was a missed opportunity,” he added.

But the pressure is also growing from Congress. “The complex interagency process necessary to achieve this long-overdue reform demands active leadership from the White House,” Moran and Wyden told Biden.

“Everybody recognizes there is a lot of slack in the system and the scope of classification is unnecessarily broad and that the declassification process is cumbersome and slow,” Aftergood said.

But he expects a nasty brawl that could also spill out into public view. “Some of those differences will not be ironed out,” he said. “There are fundamental inconsistencies between a broad vision of open government and the priorities of the national security agencies. There is only limited middle ground.”

“I am hopeful,” Harper added. “But it really does require folks in leadership positions like at the National Security Council and the close circle around President Biden really pushing this stuff. Fundamentally it is important to our democracy to have these things work properly.”