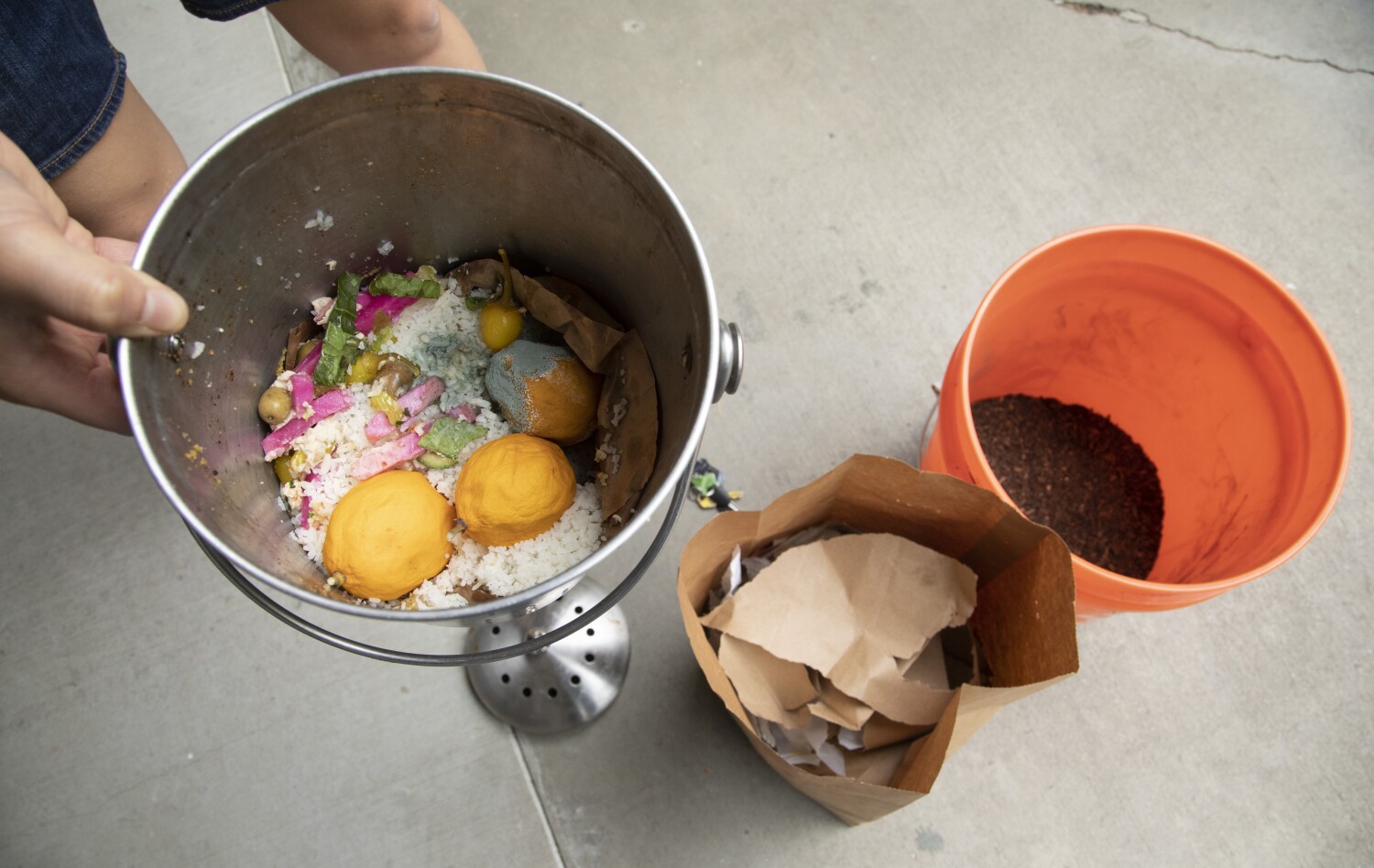 Los Angeles residents are getting mixed signals about compost.

At the start of this year, Senate Bill 1383 mandated that Californians toss food scraps into their green bins along with garden trimmings, lawn clippings and leaves. But L.A.’s Bureau of Sanitation, which is responsible for collecting your trash, recycling and green waste, only allows residents in its composting pilot program to do so.

Westwood resident Toni Smith said she’s confused. Should she toss her food waste into the green bin? Not yet, the city says.

She isn’t part of the city’s pilot program, but she wants her food waste to be put to the best possible use.

So Smith has looked into electric recyclers that break down food waste into fertilizer, but she doubts she’ll buy one “given the price point and space they require in my kitchen.”

“Hopefully, L.A. will get it together soon enough, and residents won’t have to pay for a service for more than a year or so,” Smith said via email.

What is L.A.’s pilot program?

The city of L.A. rolled out is composting pilot program in May 2019. Residents in the program received a brochure and a compost kitchen pail from the city.

The households in the program can throw all of their food waste — coffee grounds, coffee filters and non-nylon tea bags; fruit and vegetable scraps (even the moldy parts); egg shells; used and dirty paper food containers and plates; juice pulp; paper towels and tissues — into their green bins for regular pickup. (Some cities accept more food items. For example, Santa Monica also accepts meat, seafood scraps and dairy products. Check with your local municipality to get an exact list of approved food items that can be recycled.)

Right now, L.A. is collecting kitchen waste from about 18,000 households — one waste-collection route in each of the city’s 15 council districts.

The city is planning to expand its pilot program to 40,000 households by July and then to 750,000 by January 1, 2023, said Gerry Villalobos, environmental specialist for the Bureau of Sanitation. There isn’t a clear timeline yet for expanding to the rest of the city.

Residents included in the expansion will be notified through direct notification and door-to-door distribution. They will receive a kitchen countertop pail with a brochure on how to start separating their food scraps.

The next batch of 40,000 residents has already been identified, so residents will not be able to request to participate, according to the Sanitation Bureau. The households were selected for their proximity to the Central L.A. Recycling and Transfer Station, where the organic waste will be delivered and consolidated for trucking to the composting facility.

Today, collected food waste is consolidated at a city-owned transfer station and then hauled to a facility in Riverside County. CR&R, a waste management service L.A. has contracted with, feeds L.A.’s food scraps into an anaerobic digester, a type of mechanical stomach. That machine processes the biodegradable material and converts it to natural gas and organic fertilizer.

The next step for L.A. is to expand the program, but to do that the city needs to add infrastructure. That might mean building new facilities or upgrading existing facilities to accommodate anaerobic digestion.

Villalobos is on an evaluation committee looking at proposals submitted by waste management facilities to do just that. After conducting interviews and research, the committee will present its selected proposals to the city.

What the city has to consider is the cost of developing a facility, how much waste the facility can manage each day, and where to put the facility.

If a facility isn’t going to be created within city limits, then there’s the cost of transporting the food waste. That price is calculated per ton.

Villalobos said another factor to consider is that neighboring cities are competing for these services. The city of Los Angeles accounts for one-third of L.A. county’s population. And the city generates about 3,000 tons of food waste a day, he said. There are 87 other cities in L.A. County, plus unincorporated areas, generating organic waste that needs to be managed, Villalobos said.

What other cities are doing

Santa Monica started collecting food waste in 1998 on a limited scale and later became one of the first cities in the state to accept commingled green waste and food waste. With the implementation of Senate Bill 1383, participation went from voluntary to mandatory. Yvonne Yeung leads the city’s organics recycling program and said once the city collects the waste from the green bin, it’s taken to a transfer station and is sorted and processed by a contractor.

El Segundo started its program Jan. 1 because Public Works Director Elias Sassoon said he knew the new law was coming. He worked six months in advance with the community, stakeholders and the city to have a program ready. Single-family and multifamily residences and businesses were provided with green bins to recycle their food waste. If residents are interested in composting at home, material is available for pick-up from the city.

What can you do now?

While you wait for the city of L.A. to expand its waste-collection program, there are a few ways to recycle your food waste.

About The Times Utility Journalism Team

This article is from The Times’ Utility Journalism Team. Our mission is to be essential to the lives of Southern Californians by publishing information that solves problems, answers questions and helps with decision making. We serve audiences in and around Los Angeles — including current Times subscribers and diverse communities that haven’t historically had their needs met by our coverage.

How can we be useful to you and your community? Email utility (at) latimes.com or one of our journalists: Matt Ballinger, Jon Healey, Ada Tseng, Jessica Roy and Karen Garcia.