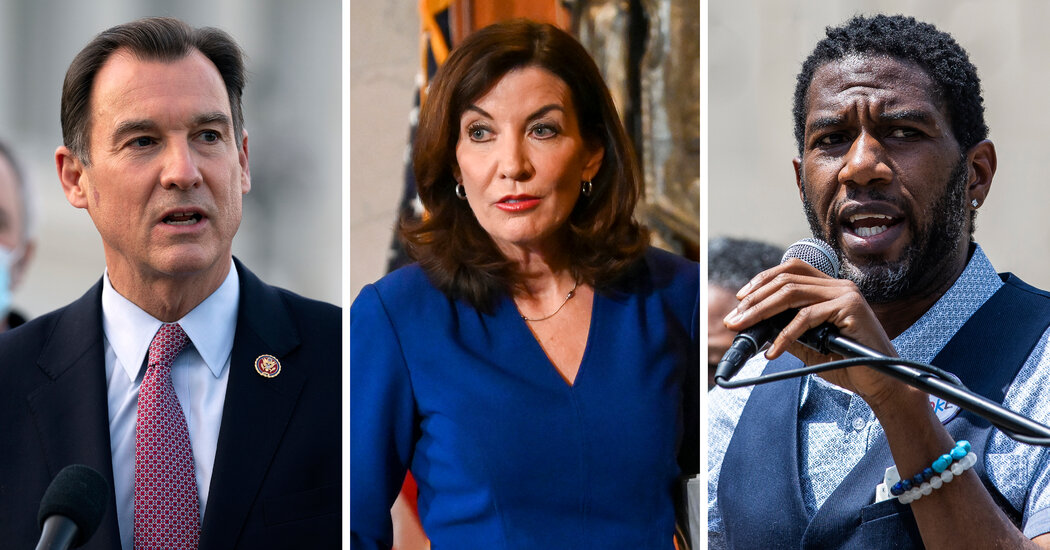 ALBANY, N.Y. — The first official debate in the Democratic primary for governor of New York took place last week with little attention or fanfare, and perhaps for good reason: The favorite in the race, Gov. Kathy Hochul, was not in attendance.

The one-hour debate, which will be hosted and broadcast by WCBS-TV, will provide the candidates a chance to introduce themselves to voters and to road-test their arguments against Ms. Hochul, who, with the June 28 primary only three weeks away, carries a commanding lead in the polls.

But the same polls show areas of concern among voters — including fears about crime and disapproval of the hefty government subsidy going to a new Buffalo Bills stadium — that could hint at potential weak spots in the governor’s armor.

The two-man debate last week was more of a shared opportunity for Mr. Williams and Mr. Suozzi to lace into Ms. Hochul, offering a glimpse at the attack lines they are likely to use in the debate on Tuesday and on the campaign trail.

How will Ms. Hochul fend off the attacks she has now seen previewed? Will the nonaggression pact between Mr. Suozzi and Mr. Williams on display last week hold? Is there still time for a breakthrough moment that could change the shape of the race?

Here’s a look at the candidates, and some of the main issues they will grapple over.

A focus on crime

Even before the mass shootings in Buffalo, Tulsa and Uvalde, Texas,, addressing gun violence was a priority for New York politicians, and it has now taken on even greater urgency.

Mr. Suozzi has placed fighting crime at the center of his platform, releasing a 15-point plan and repeatedly demanding rollbacks to changes made in recent years to New York’s bail laws that were meant to reduce the number of people incarcerated over a lack of bail money. One feature of Mr. Suozzi’s plan involves giving judges discretion in assessing a defendant’s “dangerousness” when setting bail.

Ms. Hochul made similar proposals during the most recent legislative session, securing a few changes but finding opposition to others in the left-leaning Legislature. She is likely to trumpet these modifications, as well as the package of gun-safety bills she recently signed into law, as evidence that her administration has made progress in containing gun violence.

On the other side of the issue is Mr. Williams, who has argued against rolling back the bail reforms and has said state agencies and community groups can “co-create” public safety, if provided with the appropriate funding.

Suozzi will cast himself as the experienced executive

For much of the campaign, Mr. Suozzi has rarely missed an opportunity to question Ms. Hochul’s capability, and to imply that New Yorkers are unsafe under her leadership.

This tactic has the potential to both help and hurt Mr. Suozzi, political observers say. On one hand, he is well positioned to point out Ms. Hochul’s inconsistencies, such as criticizing Washington for doing little on gun safety when she was hardly a gun-reform advocate during her time in Congress, even earning an N.R.A. endorsement at one point.

But by striking too hard, Mr. Suozzi could risk coming across as bullying or dismissive, analysts said — particularly dangerous given the makeup of New York’s Democratic primary electorate.

“Look, 58 to 60 percent of the primary voters in this election are going to be female,” said Bruce Gyory, a Democratic political consultant, adding that “an awful lot of them are highly educated, professional women who really bristle at the mansplaining.”

Mr. Suozzi has emphasized his background as Nassau County executive and mayor of Glen Cove, suggesting that he is best equipped to lead the state as an experienced executive.

In addition to his focus on making changes to the bail laws, Mr. Suozzi has said he would push to lower property taxes and to make state government to do what it can to make New York more attractive to business.

Those stances place him in ideological territory that is very similar to Ms. Hochul’s. Perhaps that is why Mr. Suozzi has struggled to make headway in polls or in fund-raising thus far, raising $3.5 million in the latest reporting period, compared with Ms. Hochul’s more than $10 million.

Williams has the progressive lane to himself

As the only far-left candidate in an increasingly progressive state, Mr. Williams has a clear path before him. He also has experience running against Ms. Hochul: In 2018, he lost to her in a competitive race for lieutenant governor.

Yet his campaign for governor has failed thus far to build momentum, raising just $250,000 in the last filing period.

At last week’s debate, Mr. Williams refrained from taking swipes at Mr. Suozzi, saving his barbs for the governor. He repeatedly suggested that Ms. Hochul’s six years as lieutenant governor to Andrew M. Cuomo, who resigned last year amid allegations of sexual misconduct, had made her complicit in some of his more unpopular policies.

Mr. Williams has also said Ms. Hochul should have more to show from her time in office, citing the lack of access to food and transit options in the mostly Black Buffalo neighborhood where last month’s mass shooting took place as proof that she had done little for constituents in her hometown.

In the debate on Tuesday, political analysts suggested, Mr. Williams will need to attack without overreaching. But more than that, he will be hoping for a breakthrough moment that could put his candidacy and ideas — like public power, free public college and an approach to public safety that is based on community building, rather than policing — into the conversation.

But that is easier said than done, said Steve Israel, a former congressman from Long Island who once ran the House Democrats’ campaign arm and has endorsed Ms. Hochul.

“Unless you have a grenade with a pin pulled halfway out, it’s hard to break through,” he said.

The calculus for Ms. Hochul is the opposite. Armed with the power of incumbency, a slate of endorsements from powerful unions and an $18.6 million campaign war chest, she will be doing all she can to maintain the race’s current dynamics.

Ms. Hochul is likely to seek to highlight the wins she earned in the most recent legislative session, including gun-safety and abortion rights legislation and a gas tax holiday, while trying to steer the debate away from controversy.

It will not be easy. Her first lieutenant governor, Brian Benjamin, resigned after being indicted on federal bribery charges; the Bills stadium deal was heavily criticized; and the fund-raising records she has set in her first year in office have raised questions about her relationship with big donors.

The debate will provide her opponents a chance to press for answers to difficult questions on live television. Still, if she is able to fend off attacks from the left and right, strategists said, she will be well positioned to claim a middle ground.

“Her best-case scenario is status quo,” said Evan Stavisky, the president of the Parkside Group, a political consulting firm.

“She needs to forcefully defend herself because she’s likely to be the focus of contrast from her opponents,” he said. “She needs to talk about her successes, and to get out of there without changing the fundamental dynamics of the race.”

Another crucial question for candidates is how to breathe life into the state’s economy, especially as New York continues to recover from the worst effects of the coronavirus pandemic and some residents leave for other states.

Each candidate has different explanations for why people have flowed out. Mr. Suozzi blames crime and taxes. Mr. Williams points to an overall rise in prices and to employers that force workers back to offices. He suggests the state should embrace a “new normal.”

Ms. Hochul has tried to thread the needle, pledging to make New York the most “business-friendly and worker-friendly state in the nation.” How successful she has been will no doubt be a subject of much debate.