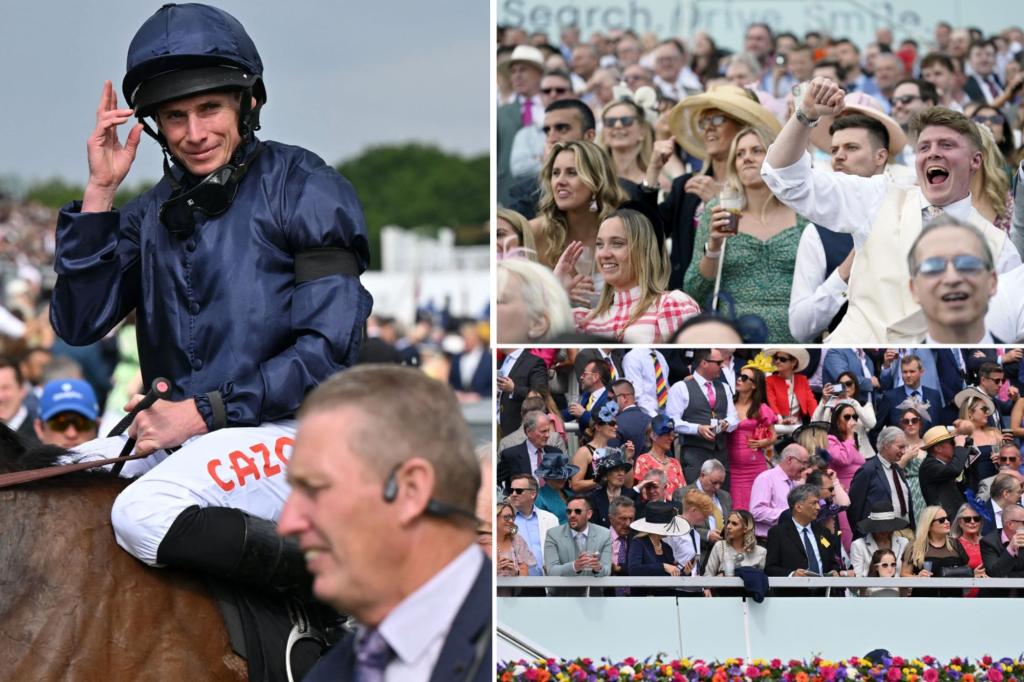 Platinum Jubilee celebrations for Queen Elizabeth II continue throughout the weekend with horse racing at the Derby at Epsom Downs on Saturday, June 4.

The monarch will miss the event amid “episodic mobility concerns” as she paced herself on the long holiday weekend after bowing out of Friday’s Service of Thanksgiving church service at St. Paul’s Cathedral. This marks only the third time in her 70-year reign she’s missed the Epsom event.

The queen’s only daughter, Princess Anne, will represent the family on the queen’s behalf.

The last time Elizabeth missed Epsom was in 1984 to mark the 40th anniversary of the D-Day landings in France. She was previously visiting Sweden on official duties when she first missed the races in 1956.

Members of the royal family are expected to attend race day, where past and present jockeys are also set to form a guard of honor at one of Britain’s biggest horse racing events.

Also coined The Cazoo Derby, the racing event is celebrating its 243rd running of “the world’s greatest Flat race” where horses compete on a level course without obstacles.

Elizabeth, a longtime racing fan, has owned many thoroughbred racehorses and is The Jockey Club’s Patron.

Fallon, who finished his career in 2016, will be among the 40 retired and current jockeys to have ridden for Her Majesty and will form a guard of honor on the track.

“It is different when you put on those colours and ride for the Queen,” he told the BBC. “I rode for her mother, the Queen Mother, which does make me very old!”

Her Majesty, who has had more than 1,800 winners globally, will not have a runner on Saturday as her top hope, Reach For The Moon, failed to recover in time following an injury.

“It is a shame she won’t have a runner in the Derby, as it would have been a joy with the Platinum Jubilee,” Fallon said.

Gates open on the course located in the heart of the Surrey countryside at 11 a.m., with the first race of the day at 2 p.m. — The Cazoo Handicap Stakes.

Two Group 3 races follow shortly after — The Princess Elizabeth Stakes at 2:35 p.m. and The Cazoo Diomed Stakes at 3:10 p.m.

All eyes will be on the British Champion Series as The Cazoo Derby starts at 4:30 p.m., a 1.5-mile race to the finish line.

Despite her attendance at Thursday’s Trooping the Colour military parade and flypast which honored her 96th birthday, The Palace issued a release that the queen would not be in attendance on Friday’s Service of Thanksgiving at St. Paul’s Cathedral.

“The Queen greatly enjoyed today’s Birthday Parade and Flypast but did experience some discomfort,” the statement read.

“Taking into account the journey and activity required to participate in tomorrow’s National Service of Thanksgiving at St Paul’s Cathedral, Her Majesty with great reluctance has concluded that she will not attend.”

The Palace added: “The Queen is looking forward to participating in tonight’s Beacon lighting event at Windsor Castle and would like to thank all those who made today such a memorable occasion.”

Following Elizabeth’s announcement, a royal expert told Fox News Digital that it’s “another sobering reminder that the Queen’s record-shattering [70-year] reign is drawing to an end.”