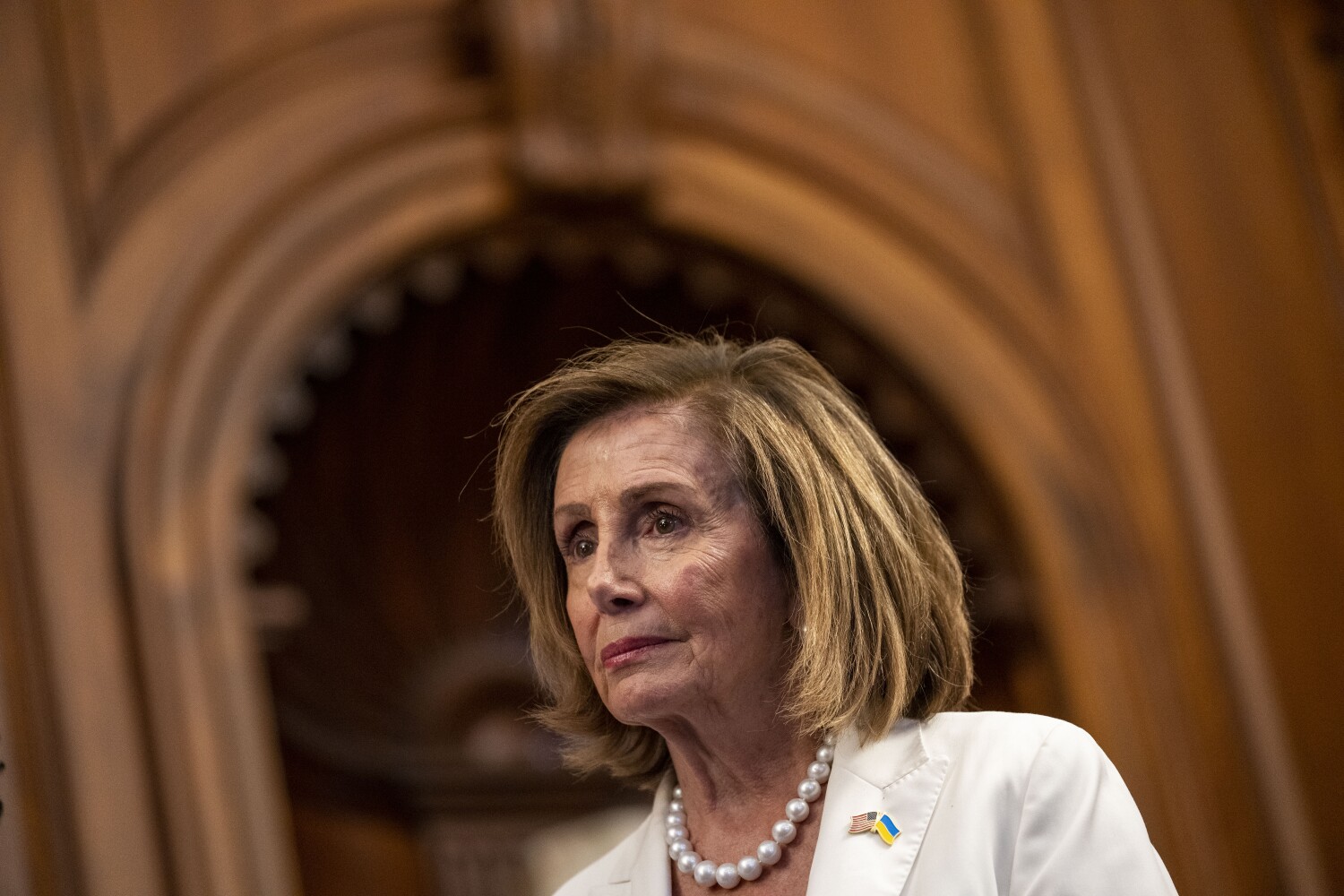 California could be on the cusp of losing one of the most effective national political allies it’s ever had.

The 82-year-old said in November 2020 that this will be her last term as speaker, a timeline she has since distanced herself from. She is running for reelection in her San Francisco district, but some expect she could retire after the midterm.

Now the prospect of life after Pelosi has some Californians beginning to ponder what kind of power vacuum her departure will leave, and what it will mean for the state’s influence in Washington.

More startling to those who have become accustomed to California Democrats’ outsized influence is that Pelosi might be handing the speaker’s gavel to House Minority Leader Kevin McCarthy of Bakersfield, a fellow Californian.

His Republican Party’s policies — both in California and nationwide — are often diametrically opposed to the state’s liberal leadership and most of its residents.

The Biden administration could prevent McCarthy from advancing some of his top priorities for the state. But it will mark a dramatic turn for California’s place in Washington.

Pelosi’s retirement will be “a blow to the country and a blow to California,” said former California Sen. Barbara Boxer, a Democrat who was elected to Congress five years before Pelosi. “It will put extra pressure on every member of Congress [from California] and our senators to step up much more than they have.”

For most of the last 15 years, any federal legislation that helped or hurt California generally had to run through Pelosi’s office, according to lawmakers and aides.

She made sure home-state projects like high-speed rail got opportunities for federal dollars, advanced interests such as water, drought and wildfire policy, and blocked Republican efforts to roll back environmental laws.

Pelosi boosted fellow Democrats from California, giving them opportunities to work on prized committees and high-profile legislation. She created openings in larger bills for policy that benefited the state, such as a Tijuana River improvement policy in the 2020 USMCA trade law. And she used the state’s progressive policies to model national legislation like the Affordable Care Act.

Because of Pelosi, California “always has a seat at the table on any relevant issue before Congress,” said Matt Weiner, the former executive director of the state’s Democratic congressional delegation and now CEO of Megafire Action. “I don’t know that some members appreciate how much Speaker Pelosi takes care of the state.”

She understands “how California’s needs are different and need to be addressed,” said Ann O’Leary, who was chief of staff to Gov. Gavin Newsom during the early days of the COVID-19 pandemic when Congress was enacting federal aid to the states.

“She’s doing it in a way that really provides real results for California because she’s in the rooms where it matters, and she’s making final decisions and shaping final packages,” O’Leary said.

During negotiations on last year’s bipartisan infrastructure bill, the state’s high-speed rail authority wanted to ensure it would be eligible for federal dollars. While the group’s leader, Brian Kelly, met with several California lawmakers, he wasn’t confident about the rail’s prospects until he met with Pelosi’s office.

“I don’t really know the shape of the world until we talk with her office,” Kelly said, adding he will miss that connection when it is gone. “I’m not looking forward to that day.”

Longtime lawmakers Boxer and Rep. Jackie Speier (D-Hillsborough) credit Pelosi with helping reverse the dreaded “ABC” attitude in Washington among lawmakers from the rest of the country: Anywhere But California.

Whether due to jealously or a belief that the state was so rich it didn’t need federal help, many California priorities got shorted.

“California was not getting its fair share,” Speier said. She says Pelosi “turned around this philosophy of ABC” to one in which California was viewed as a national priority because of its ability to bolster the entire U.S. economy.

A particularly coveted perk for California’s Democratic members has been a weekly lunch with Pelosi, which has built a deep sense of loyalty and camaraderie.

The lunch is closed to staffers save for one or two, lending itself to a more frank and intimate conversation between lawmakers. Californians benefit from having a weekly, closed-door session with the speaker, where they hear about the agenda from her directly.

“There’s a sense among members that you just do not miss it. There’s no staff, they talk candidly, can get cosponsors on bills, talk about issues before they get to the floor. And the speaker stays the entire time,” said a senior House aide who has worked for several California members. “That’s sort of a sacrosanct time for members of the delegation.”

Some question whether the delegation will remain united — and as politically powerful — without Pelosi at the helm.

“For the last 20 years, everyone has been so lockstep behind Nancy, it’s interesting to think what happens in this vacuum. There are going to be competing leadership dynamics,” said another senior staffer.

Even so, Pelosi’s retirement is not yet certain.

In 2018, during her quest to return to the speakership, she agreed she would not stay in her post beyond 2022. She reiterated in 2020 that she would abide by that agreement, but has since avoided questions about her future.

There is speculation that if Democrats defy predictions of a GOP takeover and maintain control of the House after November, she might want to maintain her post.

She and her office now rebuff questions about exactly when she will turn over the powerful post, saying she is still focused on completing the work.

“The speaker is not on a shift,” her spokesman said. “She’s on a mission.”

“Certainly a Speaker McCarthy would balance back out the perceived losses of California’s weight in Congress,” said Rep. Doug LaMalfa (R-Richvale).

LaMalfa acknowledged the differences in the GOP agenda, but said their policies would benefit the state.

If the House flipped to “a Republican majority, it would advance a different set of policy,” he said. “And from where I see it, it would be helpful for the people of California.”

LaMalfa also argued that a California Republican speaker would bring balance to the Democratic White House — and potentially a Democratic Senate.

A McCarthy spokesperson declined to comment for this article.

The Bakersfield Republican has come out strongly against high-speed rail and has pushed for climate policies that involve loosening environmental protections that Democrats favor. As speaker, he would have opportunities to advance those causes in spending bills.

He hopes to bring to the House floor the Save Our Sequoias Act, a bill designed to preserve the trees but opposed by environmental groups concerned it would bypass environmental laws, according to a person familiar with McCarthy’s policy agenda.

McCarthy would be expected to advance new California water legislation with an emphasis on storage and water reallocation from Northern to Central and Southern California, according to the person. He’s also expected to push for the growth of the Shasta Dam, a long-simmering point of contention between the two parties. Pelosi has frequently kept Shasta out of federal spending bills.

California’s clout in Washington has tended to rise and fall in recent history. When Pelosi became speaker in 2007, the state also boosted powerful committee chair posts, such as then-Reps. George Miller and Henry A. Waxman. Boxer and Sen. Dianne Feinstein (D-Calif.) had seniority in their chamber.

In 2011, Democrats lost the House and with it, Pelosi became minority leader. Boxer, Miller and Waxman retired.

As Pelosi returned to the speakership in 2019, the state’s clout rebounded. In the most high-profile display of the state’s strength, the two seats behind President Biden at the State of the Union were occupied by California women: Pelosi and Vice President Kamala Harris.

But a decline is on the horizon. In the Senate, Sen. Alex Padilla (D-Calif.) is viewed as a rising star, but low in seniority. Feinstein gave up the gavel for the Judiciary Committee amid questions about whether she was up for the high intensity job. Assuming Feinstein does not run again in 2024, her successor would be starting from the bottom of the seniority list as well.

Some California Democrats are already angling to fill the leadership void if Pelosi leaves. Rep. Pete Aguilar (D-Redlands) is expected to pursue the No. 3 House leadership post.

Rep. Adam Schiff (D-Burbank) is considering a run to replace Pelosi, although the spot is more likely to go to a non-Californian, Rep. Hakeem Jeffries (D-N.Y.).

Leveraging one of the biggest perks of being speaker, Pelosi has steered key committee posts and high-profile assignments to fellow Californians to help build a bench of leaders who could benefit the state for years.

But post-Pelosi, that road will be steeper for California lawmakers.

Said Boxer, “If you’re new coming in and you’re trying to get a plum committee and the speaker is from somewhere else, it’s going to be harder.”