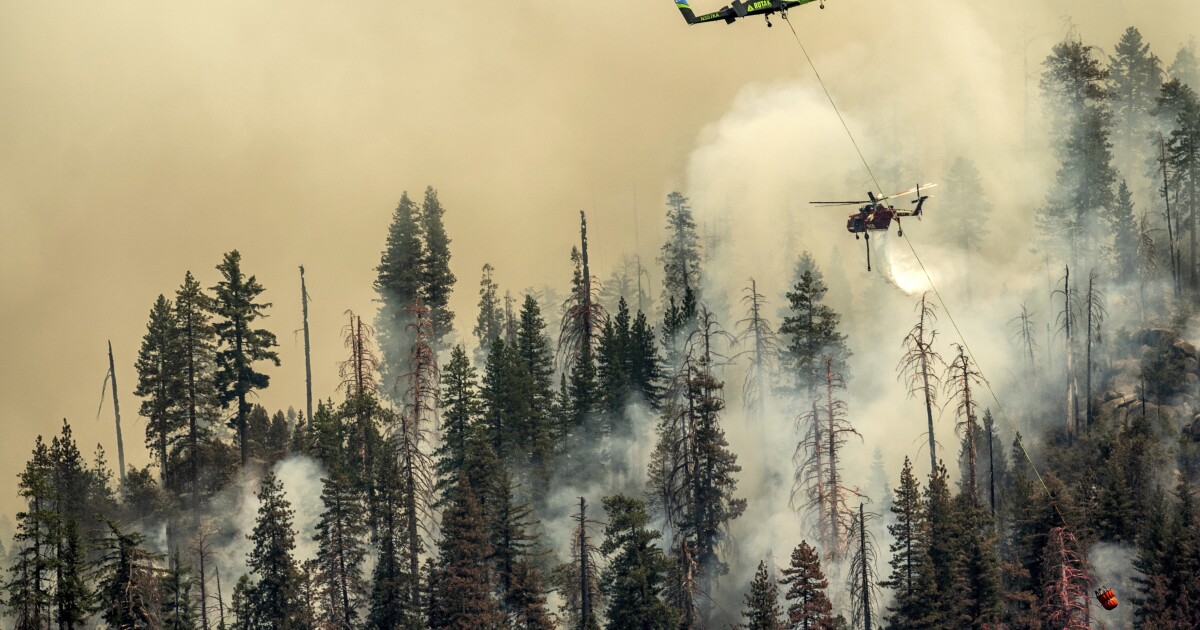 The Washburn fire had grown to at least 1,591 acres and was burning on the southern end of the park near the historic Mariposa Grove, home to about 500 giant sequoias, officials said. The blaze is also threatening the community of Wawona and prompted officials to close Highway 41.

More than 300 firefighters were battling the blaze in a coordinated land and air attack, officials said. In the Mariposa Grove, crews were scraping the ground cover to bare soil to prevent flames and spot fires from spreading, and were wrapping some of the ancient giants in protective foil.

Firefighters had also set up a sprinkler system to water down the famed Grizzly Giant, which is more than 200 feet tall and one of the largest sequoias in the park.

“The fire is burning in difficult terrain with continuous fuels,” posing a “significant threat to firefighters,” fire officials said in a statement.

On Saturday, intense smoke and flames sent embers and fire debris hundreds of feet into the air, nearly striking an aircraft that was battling the blaze, according to radio traffic from the firefight.

“A branch went over the top of us,” the pilot reported to dispatchers. “Pretty good size, probably 50 feet above us coming down and fell right between tanker 103 and myself.”

“OK, copy. So like a repeat of yesterday,” a dispatcher said.

“That’s exactly what I’m getting at,” the pilot responded. “So if we keep seeing that, we might have to knock it off. I don’t want to take a chance of busting a window on an airplane or hurting an aircraft for this.”

One bit of good news for firefighters was that relative humidity was reported Sunday morning to be around 26%, officials said. The lower the humidity the drier the conditions, increasing the chance for faster spread of flames. Fire officials said they were expecting the blaze “to keep growing moderately” and that temperatures were expected to reach the low 80s.

A warming trend was expected to begin Sunday and continue through the week.

Officials said Sunday that Yosemite remains open and visitors are advised to enter the park using highways 140 or 120, officials said.

The Washburn fire was the latest to threaten the ancient sequoias, which are found in the wild only on the western slopes of the Sierra Nevada. Although they are adapted to thrive in fire, the sequoias are increasingly no match for intense wildfires driven by climate change, years of drought and decades of aggressive fire suppression, which has resulted in dense vegetation in some forested areas.

Fire officials noted that a history of prescribed burns in the Mariposa Grove, along with scars from recent burns, could slow fire spread and limit potential damage.

“Once the fire reaches some of the recent fire scars, spread may slow,” officials said.