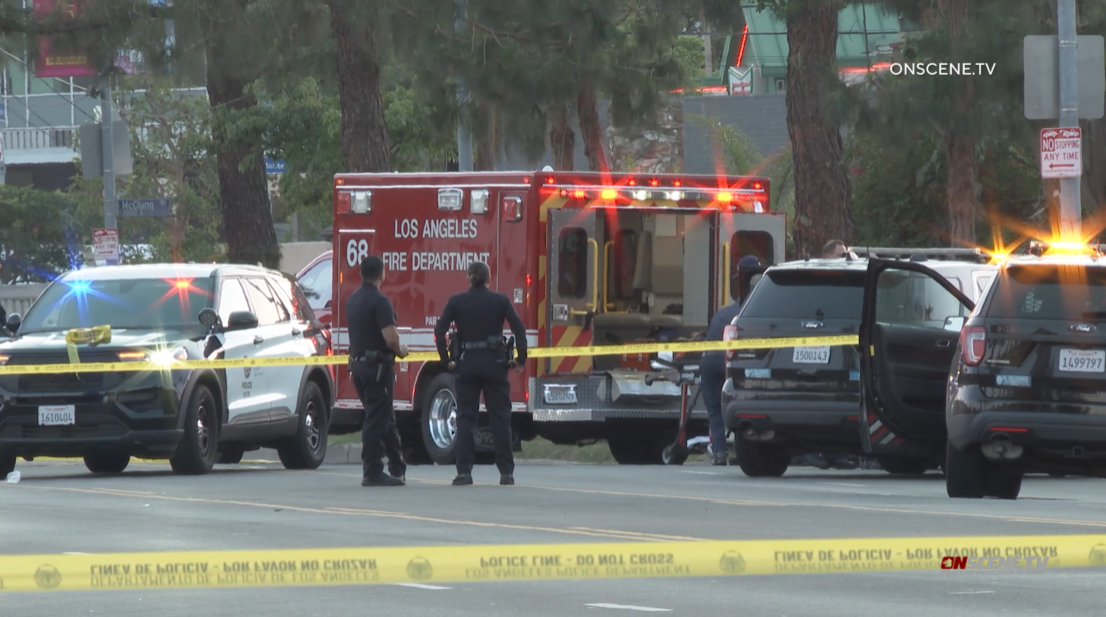 When two Los Angeles police officers confronted Jermaine Petit on an evening in July, one of them quickly realized that reports Petit was carrying a gun were inaccurate.

“It’s not a gun, bro,” the officer told his partner about the metallic object in Petit’s hand, according to video of the incident from officers’ body-worn cameras that the Los Angeles Police Department made public Thursday.

But that realization wouldn’t matter. Less than half a minute later, Petit would be shot multiple times by an LAPD sergeant firing from inside his vehicle and the officer’s partner, who failed to hear the warning that Petit was unarmed, according to the videos and information released by the department.

The release of the video, along with footage from other officers’ cameras and recordings of 911 calls, brings renewed scrutiny on how LAPD officers handle calls involving the mentally ill and shows how an apparent breakdown in communication in the frantic moments before the shooting led the officers to fire on an unarmed man.

Petit was taken to a hospital with serious injuries but has since been released, according to this family. No officers were injured.

On July 18, a man called 911 to report he had confronted a man who appeared homeless and was behind his house in the city’s Leimert Park neighborhood, according to the recordings released by the LAPD. The man refused to leave and had pulled a “pistol” on him, the homeowner said.

Officers were dispatched and, as they were looking for the man, another 911 caller said an armed man was walking up Degnan Boulevard, just north of Obama Boulevard. A short time later, two officers pulled up alongside Petit, who matched the description the callers had given, as he walked on Obama Boulevard.

The officer riding in the passenger seat quickly got out of the vehicle and ordered Petit to “come here.”

Petit continued walking away on the sidewalk, nervously turning back every few steps while repeating something unintelligible without stopping, the video shows. The officer walked after him with his gun drawn, telling him repeatedly to “take your hands out of your pockets, bro,” while his partner, who was identified by the LAPD as Officer Daryl Glover, drove ahead and stopped beside Petit, according to the video.

The footage captured the apparent miscommunication that followed.

Glover exited the vehicle and, as he was pointing his weapon at Petit from a few feet away, the first officer told him that the object in Petit’s hand was not a gun.

The two officers broke into a jog to follow Petit and Glover asked, “What is — bro, you said it’s not a gun?”

The officer’s response was muffled and Glover didn’t hear it. “Huh?” he asked.

Immediately after the exchange, Glover shouts at Petit, “Hey, drop it!” and the other officer doesn’t try to clarify for Glover that the object is not a gun. About three seconds later, the first of three shots were fired.

10:23 p.m. Sept. 2, 2022An earlier version of this story misidentified LAPD Sgt. Brett Hayhoe as Officer Daryl Glover’s partner and inaccurately described Hayhoe and Glover shooting Jermaine Petit as they chased him from behind. Hayhoe, a supervisor who arrived at the scene separately from Glover and his partner, shot Petit from inside his vehicle.

The videos released by the LAPD do not make clear who fired the first shot. In the days following the shooting, the LAPD said that two officers had fired their weapons, and identified them as Glover and Sgt. Brett Hayhoe, a supervisor who had arrived at the scene as Glover and his partner were chasing after Petit.

In response to questions from The Times, Capt. Kelly Muniz, a department spokeswoman, clarified that Hayhoe fired first, shooting Petit while he was still inside his vehicle. Glover then fired. It is not clear from the videos if Hayhoe or Glover shot twice. The fact that Hayhoe fired from his vehicle was first reported by Sahra Sulaiman, a writer for StreetsBlog L.A.

As Petit writhed on the ground and moved his arm, Glover and his partner yelled at him to “Stop moving!” and “Stop reaching for it!” in reference to the object he had been carrying. Hayhoe exited his vehicle and ordered the officers to back up and take cover behind a car.

The object was a black metal “latch actuator,” a part of a car door’s locking mechanism, which is shaped somewhat like a small handgun.

The case garnered attention after a police spokesman at a news conference the night of the shooting said Petit had been carrying a “weapon” and then Police Chief Michel Moore walked back the claim the following day, saying Petit was holding the car part.

An LAPD spokesperson previously said the comments made the night of the shooting were based on preliminary information provided by officers at the scene and that the department releases new information as it becomes aware of it.

Anger flared again at a virtual community meeting several weeks later, which was cut short after a police captain referred to the device Petit was carrying as a “nonfunctioning firearm.”

The department declined further comment Thursday, citing the ongoing investigation into the shooting.

Before the release of the video, relatives and friends of Petit had spent weeks pressing the Police Department for more information about the case, which has received attention on social media and among elected officials. Congresswoman and mayoral candidate Karen Bass said in a post on her Facebook page that the reports surrounding the shooting were “increasingly alarming,” while calling for a “full and transparent” investigation.

Police are seeking a misdemeanor charge of possession of an imitation weapon to be filed against Petit. A spokesman for the city attorney’s office said Thursday that a decision had not been made on whether to prosecute Petit.

The LAPD’s decision to pursue a criminal case has drawn strong condemnations from neighbors, activists and academics, who see the department’s response as an attempt to deflect scrutiny from its officers’ actions.

Others have said such shootings are the tragic outcomes from situations in which officers are forced to make split-second decisions about people they believe are armed.

Petit was the latest in a long string of people to be shot or forcibly arrested by an LAPD officer while in the midst of a mental crisis. The violent encounters have fueled demands by critics that police no longer be sent to calls for help involving people with mental illnesses and replaced with unarmed mental health professionals.

A recent Times report found that about a third of the more than 30 people shot by LAPD officers through November of last year were believed to have had a mental illness at the time.

Nichole Jones, the mother of Petit’s daughter, said Petit is an Air Force veteran who has long struggled with mental illness.

Jones and Petit met in 2003 at Wright-Patterson Air Force Base in Dayton, Ohio, where Petit had gone after working for several years at a base in Germany. Even in those days, Jones says she recognized Petit was struggling with post-traumatic stress disorder from his time overseas, where he’d worked in a medical facility tending to seriously wounded soldiers.

The two lost touch after Petit moved to California to pursue a job as an EMT, Jones said. But, she said, she heard from friends and relatives that he started to abuse drugs and alcohol, which exacerbated his mental health problems.

After years of cycling in and out of treatment, Petit’s mother tried to get him into a long-term facility, but Petit refused “to sign over certain rights,” believing that he would be sent to jail if he did, Jones said.

Instead, he started wandering the streets, sometimes disappearing for weeks on end. During one such stretch several years ago, he was involved in an encounter with LAPD that ended with officers tasering him.

The experience left him fearful of police, she recalled.

“I know him. I know he doesn’t pose any kind of threat to anybody, and it’s just scary that situations like this happen all the time and there doesn’t really seem to be any kind of help or solution for this problem,” Jones said. “In a city where you kind of drive around and you’ve got millionaires and billionaires.”

Jones and her daughter, Ashlyn Petit, flew to Los Angeles from their home in Minnesota after the shooting to help Petit during his recovery and to seek answers.

Ashlyn Petit recalled seeing her father at her grandmother’s house a short time after his release from the hospital. He appeared to have only a hazy recollection of what happened, she recalled. Picking up on her concern, he asked her at one point whether she was worried about him.

“And he was like, ‘Yeah, I was worried about me too.’ And that was the only thing that he said about the situation,” she recalled. “I know how he walks on the streets. He’s so out of it in his head, he’s not a threat to anybody, and I wanna know why they were so threatened by him.”