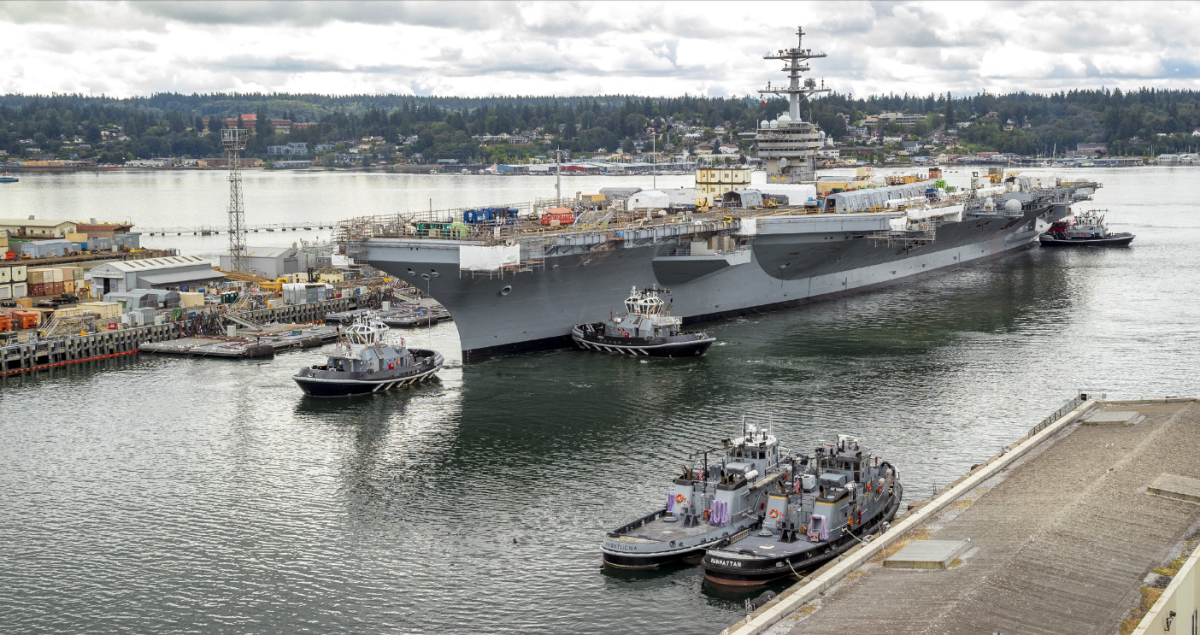 BREMERTON — The USS Theodore Roosevelt is back in the water at Puget Sound Naval Shipyard, following months of dry dock work to restore one aircraft carrier in the country’s 11-strong fleet.

The flattop still has more work ahead, but exiting dry dock 6 is a milestone marking the completion of tasks that include preservation of the carrier’s hull and various tanks and upgrades to its electronic systems.

“Every project is complex and comes with its own unique challenges,” Capt. Jip Mosman, commander of the Puget Sound Naval Shipyard, said in a statement to the Kitsap Sun. “The Roosevelt team has kept a positive attitude and worked hard to achieve this timely undocking.”

Continuing for the ship are upgrades to crew galleys and berthing spaces. There is also “routine refurbishment and upgrades to various equipment and systems,” said Anna Taylor, a spokeswoman for the shipyard.

The flattop arrived in Sinclair Inlet in July 2021 — the first visit to Puget Sound for the 1986-commissioned carrier — for an estimated 18 months of what is known as a “docking planned incremental availability,” or DPIA.

Part of the work on the Roosevelt is to get it ready to launch and land the Navy’s newest generation of jet, the F-35C Joint Strike fighter, an upgrade undertaken for the first time in 2020 during an overhaul of Roosevelt sister ship USS Carl Vinson.

The ship’s self-defense and IT systems are also being upgraded, as is its MK 38 25-millimeter machine gun and more.

“The entire availability up to this point has been a shining example of what we can accomplish when we work together,” Mosman added. “I’m incredibly proud of everyone involved.”

The Navy has yet to announce the next ship to head to the 1962-built dry dock 6, the biggest at Puget Sound Naval Shipyard and one of only two docks in the Navy that can handle the 1,092-foot-long Nimitz class of ships.

The dock itself is due for an overhaul. An engineering consultant found in 2016 it needed about $667 million in upgrades to withstand a powerful northwest earthquake. The Navy is also planning to overhaul the smaller dry dock 3 and create a second aircraft carrier-capable dock at Puget Sound, one that could dock the newest Ford class of carrier.