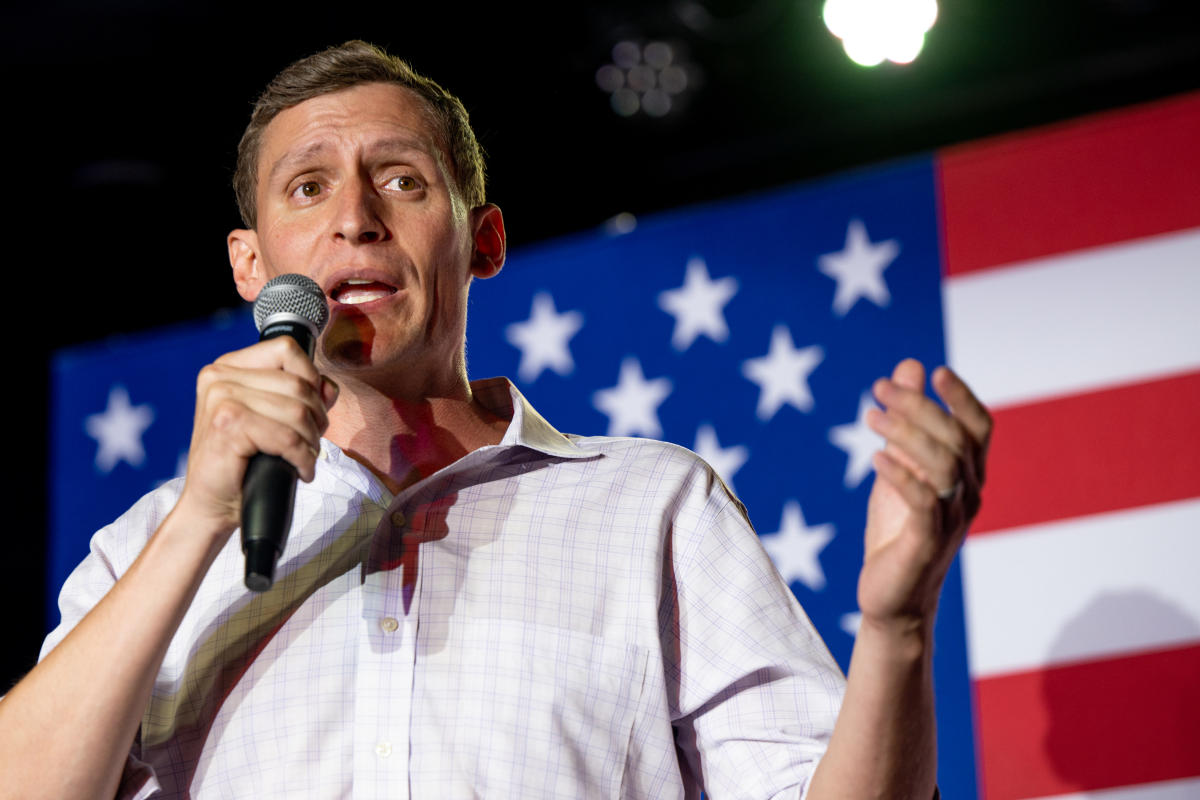 Blake Masters, an ultra-MAGA candidate endorsed by former President Donald Trump, won the marquee GOP Senate primary in Arizona Tuesday night, setting up a general-election showdown with his more traditional Democratic rival that will test whether the way to win a key swing state in 2022 is by channeling the animosities of the far right — or by trying to appeal to a broader coalition.

On Election Day, Masters will face off against incumbent Democrat Mark Kelly in a race that will help determine control of the closely divided Senate.

“We won today seven-out-of-10 Election Day votes,” Lake told her supporters Tuesday night, claiming — erroneously — that “there is no path to victory for my opponent and we won this race. Period.”

Lake also alleged that “if we don’t win, there’s some cheating going on” — a possible hint that she could challenge the results in the days ahead.

Both Lake and Finchem have parroted Trump’s lie that the 2020 presidential election was stolen from him — and vowed to do whatever it takes to prevent another Trump loss in the future. Masters has also declared that “Trump won in 2020.”

For all three election deniers, these displays of fealty were sufficient to snag Trump’s sought-after support, which he bestowed in person at a July 22 rally in Prescott Valley.

On the same day, Trump’s former Vice President Mike Pence was campaigning across the state for Robson, who has refused to say the 2020 election was rigged. Arizona Gov. Doug Ducey — another prominent Republican who, like Pence, resisted Trump’s efforts to overturn the 2020 result — also endorsed Robson, along with Finchem’s main rival, Beau Lane.

If Lake ultimately joins Finchem and Masters on the winner’s podium, they would cement a Trump sweep in the Grand Canyon State — and combine to form perhaps the most pro-MAGA slate of candidates anywhere in America.

But the problem for Republicans is that Arizona is hardly America’s most pro-MAGA state.

“With the national mood turning so strongly against the Biden administration and Democratic control of Congress, Republican candidates should have a relatively easy time recapturing seats in Arizona this cycle,” says Robert Robb, a longtime columnist for the Arizona Republic and former GOP political consultant. “But these candidates are weak candidates. Whatever this ‘new right’ thing is, I don’t think that it necessarily fits Arizona.”

From Pennsylvania to Georgia to Nevada, GOP primary voters have repeatedly rankled Republican strategists and delighted their Democratic counterparts this year by nominating candidates who could prove too extreme to be electable — and who risk blowing otherwise very winnable midterm contests because of it.

Arizona is now ground zero for this phenomenon — and Masters is Exhibit A.

His MAGA transformation has been total. Before 2016, Masters was a purist libertarian who persuaded friends to become pro-choice, described the borders between countries as just “line[s] in the sand” and favored “unrestricted” immigration. At 19, he wrote an essay that approvingly quoted Nazi leader Hermann Goering to argue that the “U.S. hasn’t been involved in a just war in over 140 years.” (Responding to a recent Jewish Insider story about that essay, written in opposition to the Iraq War and published on the website of radical libertarian Lew Rockwell, Masters admitted he “went too far.”)

At Stanford Law, Masters took a course on startups taught by Thiel, then a libertarian himself — and a Silicon Valley outlier. Galvanized by Thiel’s contrarian thinking, Masters posted his detailed class notes on Tumblr; David Brooks wrote an entire New York Times column about them. Then Thiel and Masters spun those same notes into a book called “Zero to One.” Masters spent the next eight years serving in top positions at Thiel’s foundation and venture capital firm. In 2016, Thiel backed Trump, and Masters followed him to Trump Tower to help with the transition after the election.

The key lesson of Thiel’s course — “Instead of being slightly better than everybody else in a crowded and established field,” as Brooks put it, “it’s often more valuable to create a new market and totally dominate it” — appears to be the strategy behind Masters’ campaign as well.

“I definitely approach politics with an entrepreneurial lens,” Masters told the Stanford Review last September. “President Trump showed me that new things are possible in politics. You can think of his administration as a start-up of sorts. It was disruptive. … I think sounding different and looking different is how you break through.”

To that end — breaking through by sounding “different” — Masters has cradled a short-barreled rifle in one ad while declaring that it “wasn’t designed for hunting.” “This,” he said “is designed to kill people.”

He has characterized the Democrats who are “running the country” — “Biden, Pelosi, Schumer, Mark Kelly” — as “psychopaths.” He has embraced a national abortion ban. He has touted the Unabomber, Ted Kaczynski, as a “subversive thinker [who is] underrated”. He has said he wants to slash legal immigration in half because “we do not need hundreds of thousands of people from India and China to come in every year to take coding jobs.” He has promoted the conspiracy theory that Democrats are plotting to win elections by “importing” immigrants to replace native-born voters. He has called Jan. 6 a “false flag operation,” claiming that “one-third of the people outside of the Capitol complex on January 6 were actual FBI agents hanging out.” And he has blamed “Black people, frankly” for America’s “gun violence problem.”

The question now is whether this MAGA-centric strategy will work as well in Arizona’s general election as it worked in the GOP primary. So far, general-election polling is scant — but Kelly tends to lead Masters by double-digit margins in the most recent soundings.

The irony, says Robb, is that the thing that has so radicalized Arizona Republicans is the very thing that could doom them in November: the closeness of the state’s elections.

One-third of Arizona voters are Latino; one-third are independents. In the Trump Era, those dynamics seem to have pushed the one-time Republican stronghold away from Trumpism, not toward it.

“Arizona rejected Trump and Trumpism — big time,” explains Robb. “From 2008 until 2018 Arizona had not elected a single Democrat to statewide office. In 2018, we elected a Democratic U.S. Senator, two Democratic statewide officers [including Hobbs], and Republicans lost their advantage in the legislature. They now have the thinnest margin that they’ve had during that entire period. And of course Trump himself barely won in 2016 before losing in 2020.”

“There’s a model of what would make this election a slam dunk for Republicans — which is, you don’t run against Trump, but you run independent of Trump,” Robb continues. “But Republicans are not doing that. They’re embracing Trump and Trumpism, comprehensively. Biden and his administration should be on the ballot this election cycle. But these candidates are putting Trump on the ballot — and he does not play well in Arizona.”