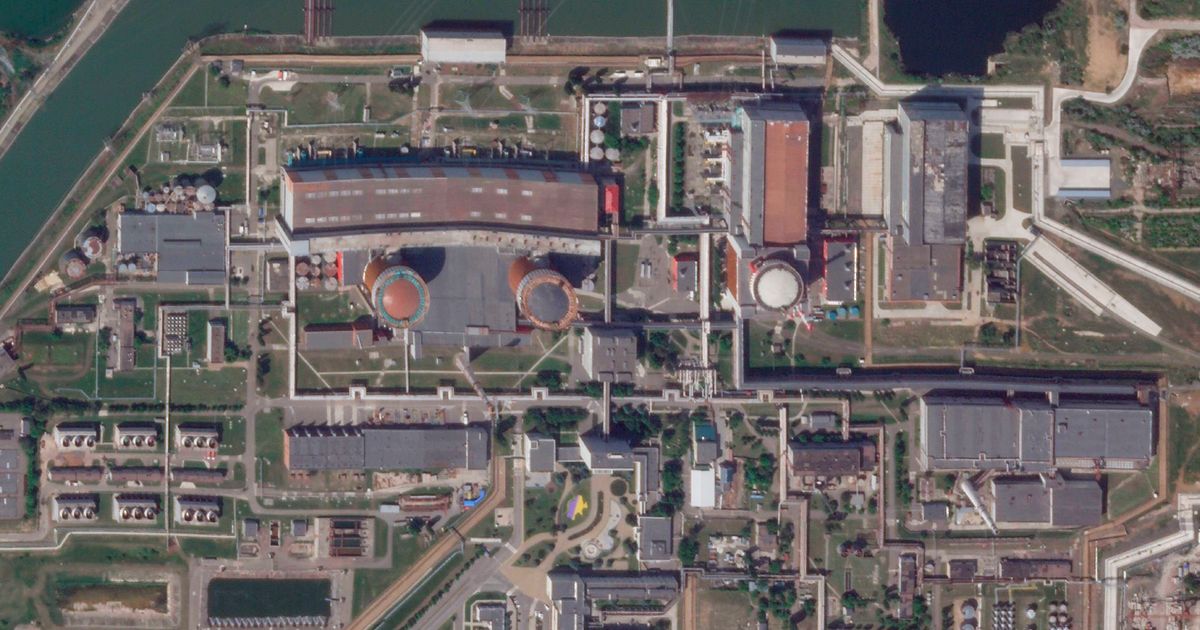 KYIV, Ukraine (AP) — A Russian missile struck close to a nuclear power plant in southern Ukraine without damaging the three reactors but hit other industrial equipment Monday in what Ukrainian authorities denounced as an act of “nuclear terrorism.”

The missile struck within 300 meters (328 yards) of reactors at the Pivdennoukrainsk plant, also known as the South Ukraine Nuclear Power Plant, blasting a crater 2 meters (6 1/2 feet) deep and 4 meters (13 feet) across, according to Ukrainian nuclear operator Energoatom.

Black-and-white CCTV footage released by Ukraine’s Ministry of Defense showed two large fireballs erupting one after the other in the dark, followed by incandescent showers of sparks. A time stamp on the video read 19 minutes after midnight.

The ministry and Energoatom both called the strike “nuclear terrorism.” The Russian Defense Ministry had no immediate comment. The United Nations’ nuclear watchdog, the International Atomic Energy Agency, did not immediately respond to a request for comment.

The industrial complex that includes the Pivdennoukrainsk nuclear plant sits along the Southern Bug River about 300 kilometers (190 miles) south of the capital, Kyiv. The attack caused the temporary shutdown of a nearby hydropower plant and shattered more than 100 windows at the complex, Energoatom said.

The nuclear plant is Ukraine’s second-largest after the Zaporizhzhia Nuclear Power Plant, which is Europe’s largest and has repeatedly come under fire. The two plants have reactors of the same design.

Russian forces have occupied the Zaporizhzhia plant since the early days of the invasion. Shelling cut off its transmission lines, forcing operators to shut down its six reactors to avoid a radiation disaster. Russia and Ukraine have traded blame for the strikes.

The International Atomic Energy Agency said a main transmission line was reconnected Friday, providing electricity that the Zaporizhzhia plant needs to cool its reactors. The IAEA has monitors at the plant.

But the mayor of Enerhodar, the city that hosts the Zaporizhzhia plant, reported more Russian shelling Monday, in the city’s industrial zone.

While warning Friday of possible ramped-up strikes, Putin claimed his forces had so far acted with restraint in responding to Ukrainian attempts to hit Russian facilities.

“If the situation develops this way, our response will be more serious,” Putin said.

“Just recently, the Russian armed forces have delivered a couple of impactful strikes,” he said, referring to attacks last week. ”Let’s consider those as warning strikes.”

The governor of the northeastern Kharkiv region, now largely back in Ukrainian hands, said Russian shelling killed four medical workers who were trying to evacuate patients from a psychiatric hospital, and wounded two patients.

The mayor of the Russian-occupied eastern city of Donetsk said shelling killed 13 civilians there.

Patricia Lewis, the international security research director at the Chatham House think-tank in London, said the previous attacks at the Zaporizhzhia plant and Monday’s strike pointed to a pattern of Russian military planners attempting to take Ukrainian nuclear plants offline before winter by targeting power supplies that keep them functioning safely.

“It’s a very, very dangerous and illegal act to be targeting a nuclear station,” Lewis said in an interview. “Only the generals will know the intent, but there’s clearly a pattern.”

“What they seem to be doing each time is to try to cut off the power to the reactor,” she said. “It’s a very clumsy way to do it, because how accurate are these missiles?”

Other recent Russian strikes on Ukrainian infrastructure targeted power plants in the north and a dam in the south. They came in the wake of a sweeping Ukrainian counterattack in the country’s east reclaimed Russia-occupied territory in the Kharkiv region and broke what had largely become a stalemate in the war.

The Ukrainian successes — Russia’s biggest defeat since its forces were repelled from around Kyiv in the invasion’s opening stage — have fueled rare public criticism in Russia and added to military and diplomatic pressure piling up for Putin.

Nationalist critics of the Kremlin have questioned why Moscow failed to plunge Ukraine into darkness by hitting all of its major nuclear power plants.