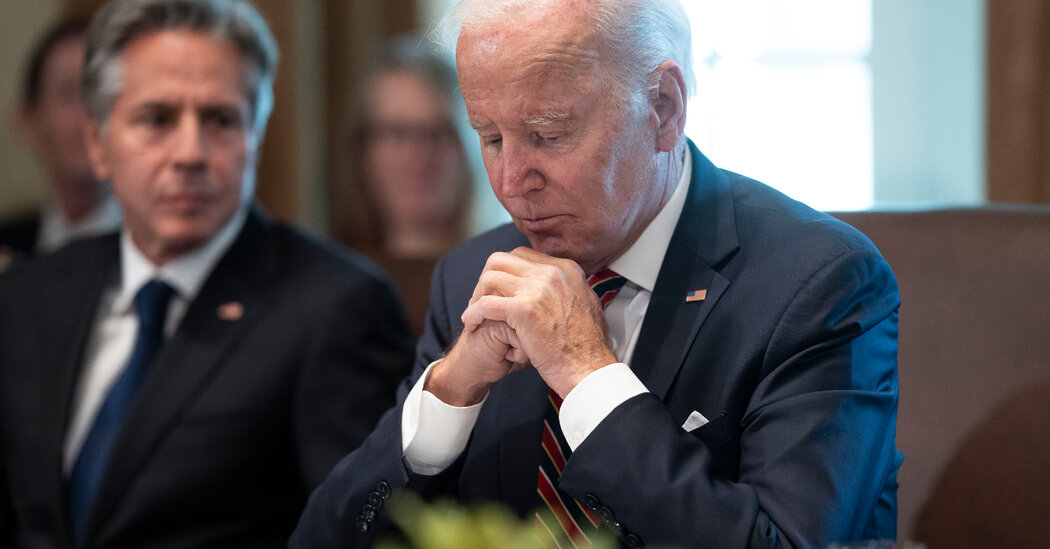 WASHINGTON — Flush with success in northeast Ukraine, President Volodymyr Zelensky is pressing President Biden for a new and more powerful weapon: a missile system with a range of 190 miles, which could reach far into Russian territory.

Mr. Zelensky insists to U.S. officials that he has no intention of striking Russian cities or aiming at civilian targets, even though President Vladimir V. Putin’s forces have hit apartment blocks, theaters and hospitals in Ukraine throughout the war. The weapon, Mr. Zelensky says, is critical to launching a wider counteroffensive, perhaps early next year.

Mr. Biden is resisting, in part because he is convinced that over the past seven months, he has successfully signaled to Mr. Putin that he does not want a broader war with the Russians — he just wants them to get out of Ukraine.

A shipment of long-range guided missiles, which could also give Ukraine new options for striking Crimea, the territory Russia annexed in 2014, would likely be seen by Moscow as a major provocation, Mr. Biden has concluded.

“We’re trying to avoid World War III,” Mr. Biden often reminds his aides, echoing a statement he has made publicly as well.

The argument over the Army Tactical Missile System, or ATACMS, comes at a critical moment, when officials in the White House, the State Department, the Pentagon and American intelligence agencies appear more concerned than ever that Mr. Putin could escalate the war to compensate for his humiliating retreat.

They do not know what form that escalation might take. But many of the options they are preparing for are bleak: more indiscriminate bombardment of Ukrainian cities, a campaign to kill senior Ukrainian leaders, or an attack on supply hubs outside Ukraine — located in NATO countries like Poland and Romania — that are channeling extraordinary quantities of arms, ammunition and military equipment into the country.

This account of the administration’s effort to control escalation in the war is based on conversations with more than a dozen senior American officials as they struggle to calibrate the next steps — hoping to build on Ukraine’s advances without triggering a wider conflict. It comes as the Ukrainians have gained momentum and the Russians, for now, are still in disarray.

American officials believe they have, so far, succeeded at “boiling the frog” — increasing their military, intelligence and economic assistance to Ukraine step by step, without provoking Moscow into large-scale retaliation with any major single move.

They say that Mr. Putin almost certainly would have pushed back hard if Washington had, at the outset of the war, provided Ukraine with the kind of support it is getting now, such as intelligence that has allowed Ukraine to kill Russian generals and target arms depots, tanks and Russian air defenses with precision-guided rocket attacks. Instead, the Americans believe their incremental strategy, and refusal to give Ukraine advanced weapons or aircraft that could reach deep into Russia, has put guardrails on the conflict.

But Mr. Putin has grown increasingly frustrated as his military struggles.

“We are, indeed, responding rather restrainedly, but that’s for the time being,” Mr. Putin said on Friday, after attending a regional summit in Uzbekistan. “If the situation continues to develop in this way, the answer will be more serious.”

He claimed that Ukraine was trying to carry out “terrorist acts” in Russia, and described recent Russian cruise missile attacks against Ukrainian infrastructure as “warning strikes.”

The same day, speaking at an intelligence conference in Washington, the deputy director of the C.I.A., David S. Cohen, said Mr. Putin would be asking his military leaders “what has happened, why it is happening, what can we do to push back and to retain our position.”

“I don’t think we should underestimate Putin’s adherence to his original objective, which was to control Ukraine,” Mr. Cohen said. He added: “We should not underestimate his risk appetite.”

Colin H. Kahl, under secretary of defense for policy, said in a statement to The New York Times on Friday that “Ukraine’s success on the battlefield could cause Russia to feel backed into a corner, and that is something we must remain mindful of.”

But he said that while the United States is committed to providing Ukraine with the equipment it needs to counter Russian aggression, the Pentagon has assessed that Ukraine does not need the ATACMS for “targets that are directly relevant to the current fight.”

On Capitol Hill, Democrats and Republicans have expressed support for preventing the war in Ukraine from spilling into a wider conflict. But many lawmakers said the Biden administration was being overly cautious in denying Ukraine additional advanced weaponry.

Ukraine has called for much greater Western assistance, like fighter jets, tanks, and long-range missiles. Although Mr. Zelensky has asked for ATACMS, the Pentagon has instead provided thousands of satellite-guided rockets and 16 High Mobility Artillery Rocket System launchers, or HIMARS, to fire them. Those rockets have struck more than 400 Russian ammunition depots, command posts and radars.

The HIMARS can carry six guided rockets at a time, each of which can strike targets nearly 50 miles away — a range that Pentagon officials say covers the vast majority of Ukraine’s intended targets. By comparison, a HIMARS launcher can carry only one of the larger ATACMS missiles at a time before needing to reload.

Critics say the military aid that the West has provided until now has been enough for Ukraine to stay in the fight but not to win.

Representative Jason Crow, a Colorado Democrat who serves on both the House intelligence and armed services committees, said the United States should send ATACMS to Ukraine.

“Sure, escalation remains a concern, and we have to be mindful of that threat,” said Mr. Crow, a former Army Ranger. “But I don’t think providing ATACMS is substantively escalatory. We need to provide what Ukraine needs to win.”

An increased flow of arms and advice now, said some former officials, is vital to help the Ukrainians capitalize on the counter offensive and survive the coming winter.

“We have a window of opportunity,” said Evelyn Farkas, the executive director of the McCain Institute and a former senior defense official during the Obama administration, speaking at an intelligence and security summit in Washington. “I worry that if we don’t provide the Ukrainians with the weapons they need to push back further, get more territory, they will not be strong enough at the negotiating table and the Russians may regroup.”

Some American officials express concern that the most dangerous moments are yet to come, even as Mr. Putin has avoided escalating the war in ways that have, at times, baffled Western officials.

He has made only limited attempts to destroy critical infrastructure or to target Ukrainian government buildings. He has not attacked the supply hubs outside Ukraine. While he has directed low-level cyberattacks against Ukrainian targets every week, they have been relatively unsophisticated, especially when compared to capabilities that Russia has shown it has, including in the SolarWinds attack on American government and commercial systems that was discovered just before Mr. Biden took office.

Some officials have expressed concern Mr. Putin could detonate a tactical nuclear weapon — perhaps in a demonstration blast over the Black Sea or Arctic Ocean, or in Ukrainian territory. But there is no evidence that he is moving those weapons, officials say, or preparing such a strike.

One senior intelligence official said there was a debate underway inside American intelligence agencies over whether Mr. Putin believes such a step would risk Russia’s alienation from the countries it needs most — especially China — or whether he is holding the option in reserve.

Mr. Biden addressed the issue directly in an interview with CBS for “60 Minutes,” scheduled for broadcast on Sunday, when he warned that turning to nuclear or other unconventional weapons would “change the face of war unlike anything since World War II,’’ an apparent reference to the American use of nuclear weapons on Hiroshima and Nagasaki, Japan.

“They’ll become more of a pariah in the world than they ever have been,’’ Mr. Biden said, in an excerpt released by CBS. “And depending on the extent of what they do will determine what response would occur.”

That last statement appeared to refer to discussion inside the American defense community about how to respond to a demonstration blast — more akin to a nuclear test, though one conducted to warn of potential escalation — versus a strike on a populated part of Ukraine.

Mr. Putin, despite his early setbacks, appeared generally satisfied with how the war was going in recent months, content to give his army the time to make slow progress as it pummeled Ukrainian lines with a brutal artillery campaign.

But as he made clear on Friday, he is content no more. American officials say Moscow is even more ready to blame the United States for its troubles than it was earlier in the war.

“The disclosures that the U.S. intelligence is helping the Ukrainian side has shifted the Russian narrative even more to the message: We are fighting NATO now,” said Larissa Doroshenko, a researcher at Northeastern University.

There also are signs that Mr. Putin could be worried about his own political standing. Public criticism in Russia is on the rise in the aftermath of the counteroffensive. Commentators have, mostly, avoided any direct critique of Mr. Putin. But some academic experts see harsh assessments of the Russian military command as an implicit criticism of Mr. Putin.

The troubles facing Mr. Putin — from mounting criticism to the Ukrainian military strength — mean that his escalation calculus could change.

That has made the decision on longer-range weaponry particularly difficult.

The recent rhetoric out of Russia may well be designed to make the United States think twice about the ATACMS. The missiles would allow Ukraine to strike deeper into Russia or Crimea. Mr. Zelensky has vowed to take back the peninsula, and has carried out stunning attacks against Russian targets there in recent weeks.

Still, the missiles would not allow the Ukrainians to break the defensive lines that the Russians are trying now to rebuild. And some experts caution that they are unlikely to tip the balance in the war.

Throughout the war, U.S. intelligence has proved adept at learning Russian military plans, but its track record on Mr. Putin’s intentions is more mixed.

Intelligence officials have said publicly that Mr. Putin’s war aims remain the same from the beginning of the war — which include the removal of Mr. Zelensky.

In response to the recent setbacks, Mr. Putin could also consider some kind of additional military mobilization, according to U.S. officials. Mr. Putin has so far been unwilling to trigger a full mobilization. But military experts said he could call up more reservists, or men who have previously served in the military — which would be less politically fraught and could bring forces to the battlefield quicker.

What Mr. Putin decides to do could depend on his assessment of his own strength at home, how quickly he thinks Ukraine can regroup and attempt another counteroffensive — and what he can do to deter, rather than encourage, further American support.