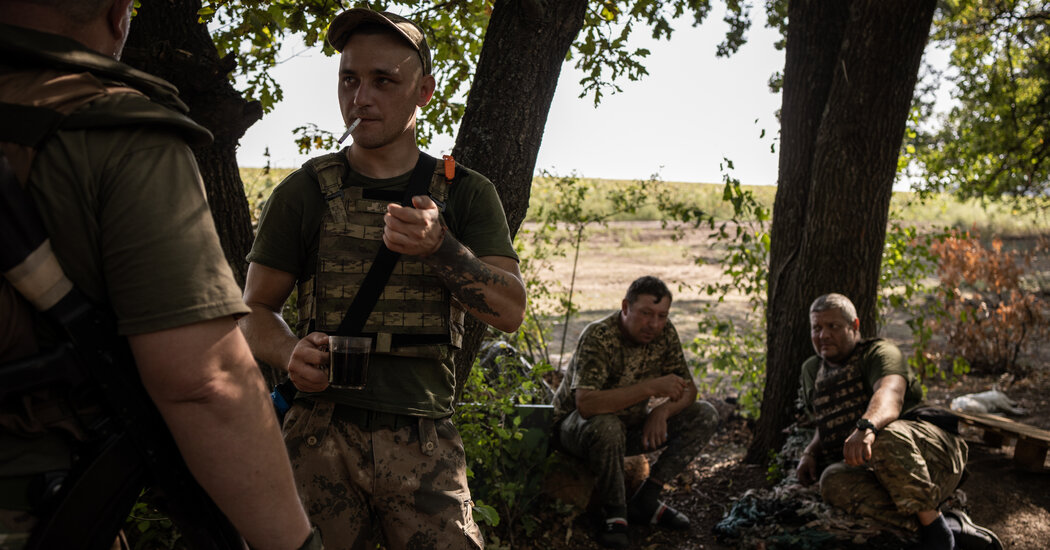 KYIV, Ukraine — Ukrainian forces launched ground assaults on Monday in multiple areas along the front in the Kherson region of southern Ukraine, apparently stepping up a counteroffensive aimed at recapturing territory seized by Russia.

The intensifying fighting coincided with an announcement by the chief of the International Atomic Energy Agency that a team of nuclear experts would visit the Russian-occupied Zaporizhzhia nuclear power plant, on another part of the front about 100 miles to the northeast, where frequent shelling has raised the threat of a disastrous radiation release.

Ukrainians say the plant’s staff — overworked and mistreated by Russian troops — has struggled to keep it running safely, motivated by a mix of duty and duress. The I.A.E.A. wants to assess the plant’s safety and the state of the workers, and establish a permanent presence there to monitor operations.

For months, Ukrainian officials have promised a broad counteroffensive in the Kherson region to push Russian forces from the western bank of the Dnipro River, a natural barrier. It was unclear if the fighting on Monday was the start of that larger effort.

President Volodymyr Zelensky’s government has been under pressure to begin a significant operation before autumn rains leave the countryside muddy and impassable, before a feared energy crisis undermines European support, and before Russian forces can further fortify and resupply their positions.

In the fighting on Monday, Ukraine accelerated what had been sluggish movement in ground operations even as their long-range strikes into Russian-held territory picked up over the summer.

But risks abound as Ukrainian troops push forward over farm fields and irrigation canals along the northern rim of the Kherson region. After weeks of Ukraine softening up Russian positions with artillery and rockets, Russian forces west of the Dnipro are already largely cut off from resupply, as Ukraine has used the American-provided High Mobility Artillery Rocket System, which fires precision rockets, to destroy bridges across the river.

Ukrainian success would buoy morale at home and could persuade wavering allies to continue sending weapons to Kyiv. Failure could mean sacrificing lives for little or no gain, only to have the war settle into a stalemate through the winter. The government has signaled the start of offensive operations multiple times since May, but not much land has changed hands.

Fighting along the southern front escalated sharply on Monday, according to Ukrainian military and civilian officials, and the Ukrainian government said its military had “breached the occupiers’ first line of defense near Kherson” as part of a multipronged advance. The Ukrainian military also claimed on Monday to have struck a large Russian military base behind Russian lines in the Kherson region, destroying it.

Russia’s Defense Ministry confirmed a Ukrainian push in the region, but said in a statement that “Ukrainian units have suffered heavy losses,” and that the offensive had “failed miserably.” It claimed that Ukraine had suffered 560 casualties in Monday’s action, and lost two warplanes and dozens of tanks and other vehicles.

It was not immediately possible to verify Ukraine’s claims of progress, or Russia’s claims — which are often highly inflated — of Ukrainian losses. Nor was it clear how big the offensive was, or how long it would be sustained.

The spokeswoman for Ukraine’s southern military command, Nataliya Gumenyuk, issued a statement saying, “Every military operation requires silence,” and that “everyone needs to be patient.”

Across the Kherson region — whose capital was the first major city to fall to Russian forces after President Vladimir V. Putin invaded Ukraine in February — electrical networks blinked out amid the fighting, and Russian media reported evacuations from towns in the area.

A U.S. defense official said, “The announced offensive shows the Ukrainians’ appetite for progress on the battlefield.” But the official, speaking on condition of anonymity to discuss sensitive military matters, added that the Pentagon remained cautious about whether Ukraine’s current military capabilities were sufficient to make significant gains.

“I don’t know what’s going to happen next and how, but so far all goes according to the plan,” he said in a text message.

The claim of a breakthrough by a Ukrainian unit, the Kakhovka group, came in fighting to the north of Kherson city, the unit claimed in a statement posted online with a video that appeared to show captured positions. On the Russian side, bloggers who have posted on military issues acknowledged a setback on the front near the Inholets River, a slender tributary to the Dnipro looping through farmland that had presented a barrier to Ukrainian troops.

To the east the sprawling nuclear plant presents another daunting obstacle, upstream on the eastern bank of the Dnipro, where Ukrainian forces control the western bank.

Ukraine has said Russian forces use the sprawling site as a fortress to launch artillery attacks, knowing that the Ukrainians across the river dare not fire back, for fear of hitting vital equipment and causing a radiation catastrophe. Russia insists that it has not put any heavy weapons at the plant.

Each side blames the other for the shelling that several times has struck the complex, sometimes damaging crucial systems that were repaired in time to prevent a serious accident. They have accused each other of plotting intentional attacks on the plant, to blame on the other side.

The I.A.E.A. chief, Rafael Mariano Grossi, tweeted on Monday that he was leading a 14-person team of experts “now on its way” to Zaporizhzhia, after months of pleading for access to the site. Its findings could ease global fears of a nuclear calamity — or reinforce them.

A person familiar with the matter, who spoke on condition of anonymity to discuss sensitive security matters, said the arrangements for the risky mission were complex and subject to change, but that the team might reach the plant as soon as Wednesday.

Russia’s envoy to the I.A.E.A., Mikhail Ulyanov, said that Moscow would facilitate the visit, and that the agency had signaled that it intends to station some experts at Zaporizhzhia “on a permanent basis,” the state news agency RIA Novosti reported. The person familiar with the I.A.E.A. plans confirmed that it wants a permanent presence there to assess safety and respond to any crises.

The I.A.E.A. mission follows weeks of contentious negotiations involving Russia, whose forces occupy the plant, and Ukraine, whose engineers are keeping it running under harrowing conditions.

Mr. Grossi did not specify how the mission would reach Zaporizhzhia, which is Europe’s largest nuclear facility, a complex of six light-water reactors, cooling towers, machine rooms and radioactive waste storage sites. If the inspectors travel through Ukrainian territory to reach the plant, they would become one of the few international missions to cross the front line during the six-month war.

The I.A.E.A. has said that its team would check on safety systems at Zaporizhzhia, assess damage to the plant and evaluate the staff’s working conditions. Among the main concerns is that fires or other damage could cause cooling systems to fail and lead to a nuclear meltdown.

The agency’s vagueness about timing and security arrangements is a sign of the sensitivity and danger of the mission. The plant is not in the region of the Ukrainian offensive, but it lies on the front lines of an active war.

Mr. Zelensky, speaking remotely to a conference in Norway, said, “Russia is the only terrorist in the world who managed to turn a nuclear power plant into a battlefield.”

Dmytro Kuleba, Ukraine’s foreign minister, said on Monday that he expected the I.A.E.A. experts would conclude that Russia was putting “the entire world at risk of nuclear accident,” and repeated Ukraine’s calls for Moscow to withdraw its forces from the plant. The plant has come under sporadic shelling since early August, although the extent of the damage remains unclear.

Plant employees and outside experts say an artillery strike would not penetrate the yard-thick reinforced concrete of the containment vessels over the six reactors, but could damage crucial supporting equipment or spark fires that could burn out of control. Artillery strikes could also breach the less robust containers used to store spent nuclear fuel.

Fears of a possible radiation release have prompted Ukrainian officials to start distributing potassium iodide, a drug that can protect against some radiation poisoning, to people living within 35 miles of the plant. Towns in Ukrainian-held areas nearby are emptying out, as residents flee artillery strikes and any radiation risks.

In the nearby Ukraine-held village of Chervonohryhorivka, the sound of incoming and outgoing fire could be heard all morning. A woman who offered only her first name, Nataliya, described heavy shelling at around 1 a.m. on Monday that sent people fleeing.

“People were taking their kids in their arms,” she said, “and running away.”