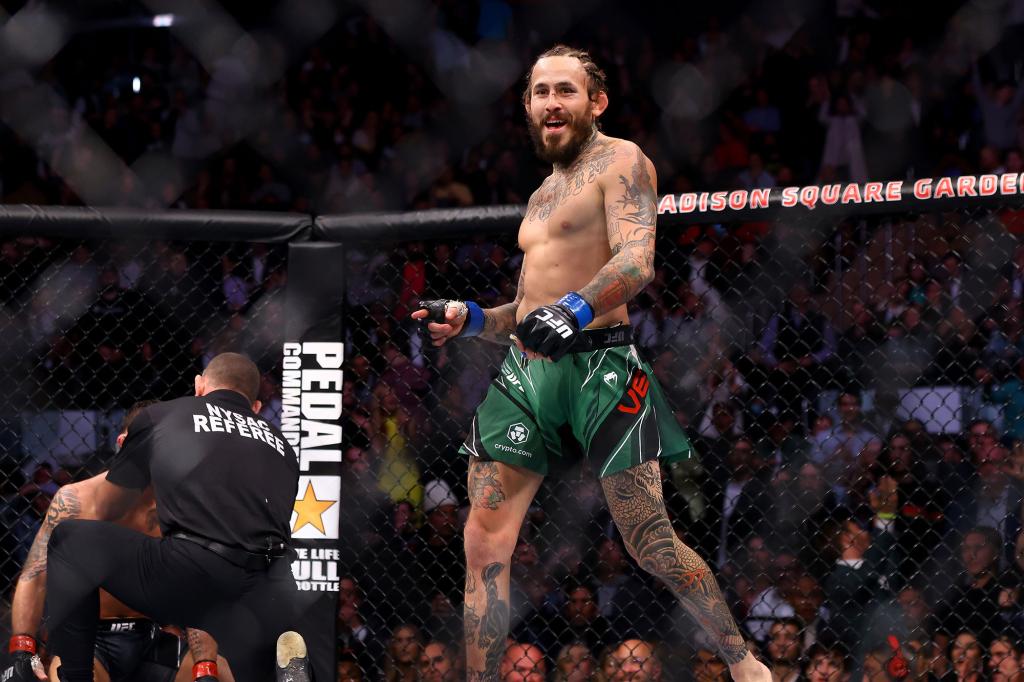 Q: This will be your first five-round fight. Do you think that favors you?
A: The more time you’ve got on the clock, the more chances you have. That can go both ways. But they always say, while you’re alive, you still have a chance. So I feel those extra 10 minutes will help.

Q: Why is Rob Font the right opponent for you right now?
A: He’s just ahead of me in the rankings. And you know, I’m coming off a win; he’s coming off a loss. We lost to the same guy [Jose Aldo] by decision, so I think it’s the right move.

Q: How do you feel you two match up?
A: I’m expecting a hard fight, so I’m not taking this easy. I don’t think it’s gonna be easy. I can talk all the s–t I want; at the end of the day, you gotta walk the f–king walk, and you gotta be ready. The only thing I know is I’m ready, and I’m gonna finish it.

Q: How can you break through as a title contender with TJ Dillashaw, Aldo and the returning Henry Cejudo in championship contention?
A: Winning this fight. I feel I go in there and kick this guy’s ass, and I’m right there. So honestly, I don’t think about absolutely nobody besides my opponent.

Q: You started 4-4 in the UFC. You’re 8-2 since then. What changed that led to your run of success?
A: First of all, you’ve gotta find the right people. At the beginning, I was training in Ecuador; that was definitely a mistake. Even if you have good people around you, the level [and] the way somebody teaches you, everything was just at a lower scale. Then I moved to [California], I found a gym, and I found a little bit of success there. But still, sometimes it’s not enough. Sometimes you need a little bit more. Sometimes you win, win, win; you start to go, and then you get a tougher fight in the rankings. And then you figure it out: Well, now I need more. You hit the roof, now you need somebody that takes you to the next level. And I got in touch with [coach Jason] Parillo. It’s been a couple years [with him]. And now I’m like, “OK, this is the guy that [will] make me break through. Now I’m with somebody that’s been there, won titles, and not just one but multiple times.” I’m like, “this is the guy that’s gonna make me a world champion.” I believe that, and I’m happy about it.

Q: What did you think of the New York crowd at the Garden?
A: I like crowds. That was special. I don’t want to take [anything] away from the crowd or my opponent, but MSG was everything to me. I’ve been trying to be at MSG since I signed with the UFC, and MSG was just special for me. I was so motivated. I was so happy to be there. That’s why I fought the way I fought.

Q: How did you come to be the UFC’s Spanish-language commentator?
A: One day, I did like a show called [“UFC Ahora.”] Then I saw the producer around and was like, “Yo, I really want to work in the commentary department,” and the guy was like, “Yeah, but you have no experience.” I’m like, “Maybe I don’t have experience, but I’m okay talking to [the] camera, and I’m very knowledgeable about MMA. I watch a lot. … so I would love to try it.” So they gave me a try. They liked that I knew a lot about fighting. I gotta work out all my vocabulary, speak a little slower sometimes, but little things like that. But overall, it’s great. I just like to watch fights live. For me, I’m not even working. Honestly, I’m just watching and talking. I [would] do the same thing on my couch, but I get paid a little bit, and I’m able to watch live, which I love.

Q: How did you and Action Bronson become friends?
A: I love that guy. Just [through] social media. We followed each other for a couple of years [or] months. He’s a big MMA fan. One day, he comes to me, “Hey, I’m coming to California, let’s link.” And I was like, “That’ll be amazing. It [would] be my pleasure.” … We became friends. And now, every time he’s in town, we hang out, we eat good food, we train together, we smoke good, and now if I come to New York, I come say hi to him. I really like him. He’s a really cool guy. He means well, and he’s got great energy.

Q: Do you recall your first experience watching MMA?
A: We were a bunch of surfer kids all getting high at a friend’s house, and we were watching Pride FC  and YouTube and Kimbo Slice, some Wanderlei Silva. And all my friends were like, “Yeah whatever.” And I was like, “No, no, wait a minute. Let me see that. Is this actually a thing?” … And I literally became a fighter overnight. I was like, “I kind of like this.” I was fighting in the streets all the time, but I never trained.

Q: Who in MMA do you most admire?
A: GSP [Georges St-Pierre].

Q: Favorite song?
A: I listen to everything, but rap and reggae are probably my main two.

Q: Favorite video game?
A: [As a kid], I [would] watch my brother and cousins play. I never tried to play.

Q: What’s a perfect day for you that doesn’t involve fighting?
A: Wake up, surf in the morning, come back home, have a barbecue, family, friends, my main people around, drink a little bit of wine, smoke some weed, everybody’s smiling, everybody’s happy. And that’s it.