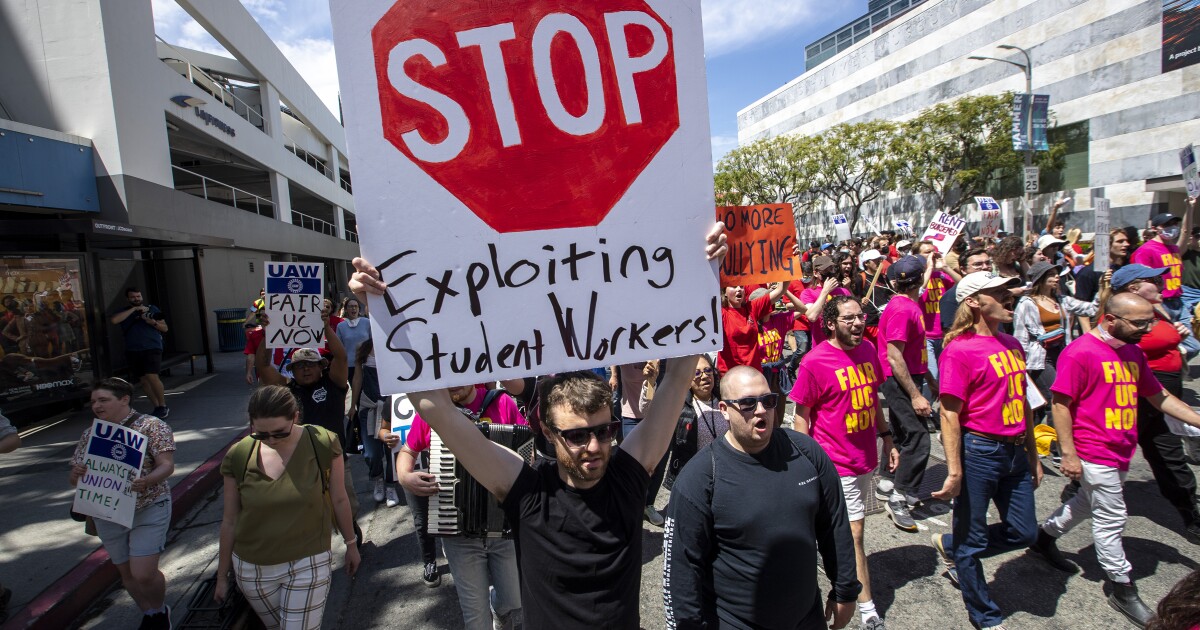 Hundreds of UCLA researchers, student-instructors and other academic workers took to the streets of Westwood on Tuesday afternoon, protesting low pay and what they deemed institutionalized discrimination and harassment at the University of California.

The group marched to Westwood and Wilshire boulevards in Los Angeles, shouting slogans and banging pots and pans, before decamping at the intersection, where some supporters sat in a large circle and blocked traffic for more than two hours. Two dozen union leaders were arrested after Los Angeles police declared an unlawful assembly and ordered the demonstrators to disperse.

The protesters were among thousands of academic workers from across the University of California’s 10 campuses and the Lawrence Berkeley National Laboratory who were demonstrating amid tense negotiations over increased pay and expanded protections.

“We’re the ones writing the grants that earn them millions of dollars, and we still get paid $35,000,” said neuroscience researcher Abinaya Muthusamy, 24, who had to leave UCLA graduate student housing because she couldn’t afford the rent on her university wage.

“They know how much we’re making, because they’re the ones paying us,” she said Tuesday.

More than 48,000 such workers are represented by three local branches of the International Union, United Automobile, Aerospace and Agricultural Implement Workers of America, or UAW. The members are seeking to bargain together for cost-of-living raises, paid family leave and other policy changes.

Rafael Jaime — president of UAW Local 2865, which represents 20,000 instructors, researchers, teaching assistants, readers and tutors across the UC system — said Tuesday that the university system is falling back on its promise to advance equity.

“We’ve been putting forward some really important demands that would give us a real living wage, and instead of bargaining in good faith, they’ve attempted to claw back important rights,” Jaime said.

The three UAW locals aren’t the only academic unions to butt heads with UC in recent months, nor is it the only ivory-tower institution being buffeted by organized labor.

“We’re in a very crucial point in time, not only in our unions’ history, but across the country,” said Gaby Barrios, an officer of UAW Local 2865.

It is also a crucial time for the university system, which saw record-breaking applications this year, despite ongoing tuition hikes. The flagship school, UC Berkeley, is racing to avoid deep cuts to its in-person class this fall, as its newest campus, UC Merced, is facing a severe shortage of student housing and fierce competition for undergraduate seats.

While acknowledging the role the union workers play in supporting students and faculty, UC took umbrage with their assertion that the university system is refusing to negotiate.

“We respectfully disagree with the union’s assertions about takeaways and UC being intransigent,” UC spokesperson Erika Cervantes said in an email. “Our overarching goal with each of these negotiations is a multiyear agreement that recognizes these employees’ many important contributions to the UC community with fair pay, quality health and family-friendly benefits, and a supportive and respectful work environment.”

Among the complaints of many workers is the high cost of housing near campus, coupled with their low pay.

Housing prices have surged around the most coveted campuses, which occupy some of the most expensive real estate in the U.S.

“Our jobs do not pay us enough to live where we work,” Barrios said. “UC is one of the biggest landlords [around its campuses]. They house a lot of the academic student-employees. They pay our salaries, and they take more than half of it in rent.”

Some employees stretch their money by living far from campus, where rents are lower. But those savings are quickly eaten up by university parking fees, many said.

To avoid both, Desmond Fonseca spends hours a day on the bus, while Juan Luis Romero commutes by bike. He was recently hit by a car on Wilshire Boulevard while riding home from the lab and ended up at Ronald Reagan UCLA Medical Center with multiple injuries.

“They told me, get ready for the bill,” he said, showing off a scar on his shoulder. “It was even more than my rent.”

UC pay is not only low but often inconsistent, the union workers said. That’s one reason the three UAW locals are seeking to bargain jointly: Members like Muthusamy move between different units in a single year, teaching one quarter and doing laboratory research the next. But instructors are paid at the end of the month, while researchers get their checks at the beginning, among other bureaucratic distinctions. Every time their roles switch, workers face weeks, or even months, without income, they said.

“There was a period where I didn’t get paid for three months,” Muthusamy said.

Her roommate, Sukriti Gupta, 25, earns $30,000 a year for her work at a UCLA neuropsychology lab.

“I didn’t expect it to be this difficult,” said Gupta. “I mean, the opportunities you have here are unparalleled.”

“Which is why we didn’t think about a living wage when we came here,” Muthusamy agreed.