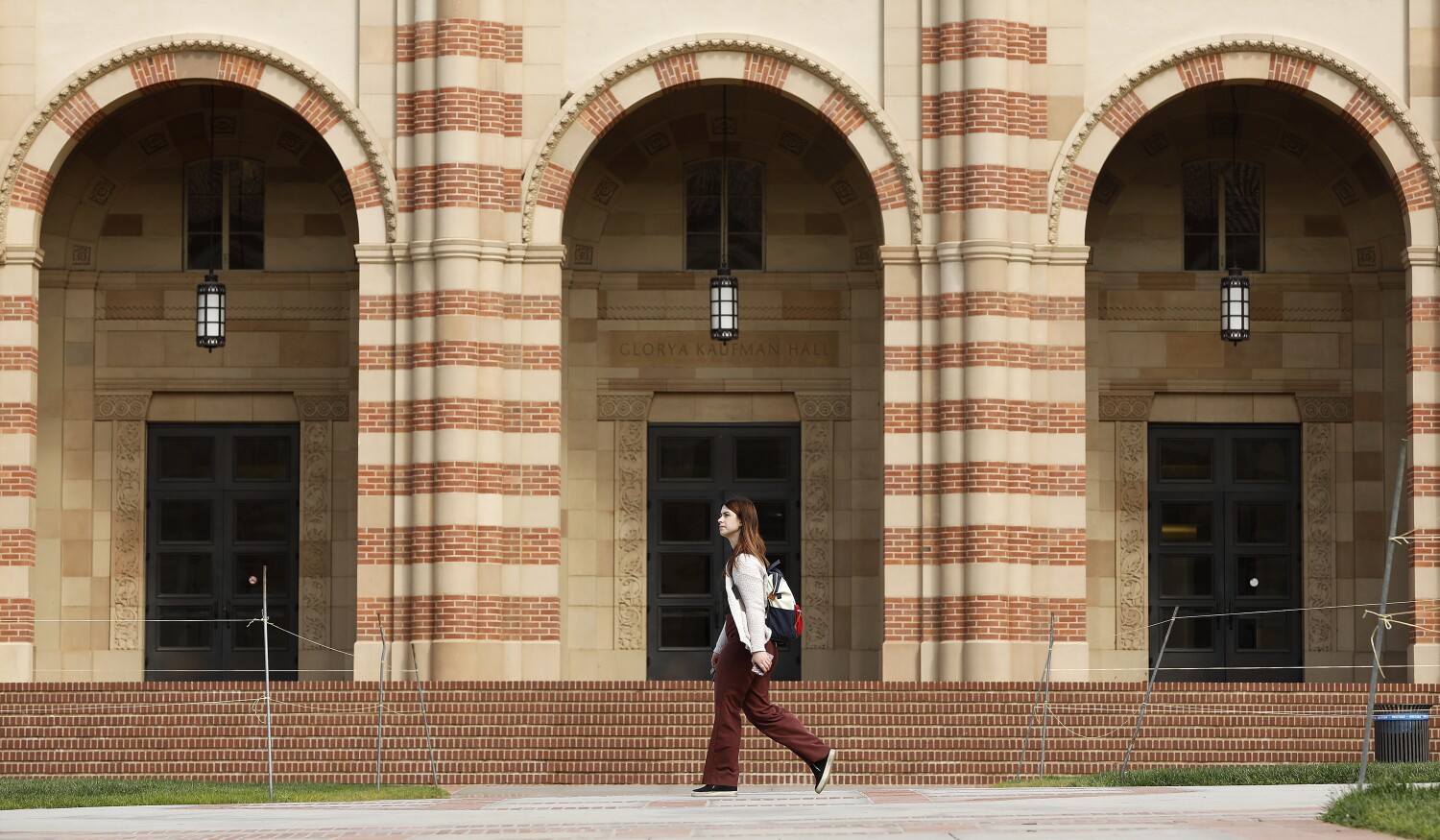 California’s three systems of public higher education are set to get a big funding boost — but in exchange will need to meet comprehensive targets to improve access, affordability and equity under Gov. Gavin Newsom’s revised budget proposal set to be unveiled Friday.

The proposal for the University of California, California State University and California Community Colleges sets out the most detailed numerical goals ever included as conditions of state funding under agreements reached by Newsom and the three systems. The ambitious goals include increasing graduation rates, closing achievement gaps, adding more UC and CSU seats for Californians, boosting financial aid, lowering debt, reducing the cost of college attendance and producing more graduates in high-demand fields, such as teaching and science, technology, engineering and mathematics.

For the first time, the three systems will submit reports to the governor and Legislature each November on their progress in meeting the goals. Those reports will help shape the next budget cycle. If the systems fall short, their funding could be reduced in the following fiscal year — or resources could be added to overcome identified obstacles.

“These agreements represent historic state reinvestments in our public colleges and universities, as well as a framework for holding all of ourselves accountable for delivering real results for students and families,” Newsom said in a statement.

The deal reflects a more collaborative relationship between the governor’s office and the three public systems — particularly UC.

In the past, the relationship between then-Gov. Jerry Brown and UC President Janet Napolitano was notoriously tense and mistrustful. In 2018, for instance, Brown offered a 3% annual base funding boost, which UC officials decried as insufficient, focusing on increases in California student enrollment, streamlined transfer programs and expanded online classes.

Newsom’s team has laid out more strategic goals and the promise of more funding to meet them — a 5% base general fund increase in each of the next five years.

The 10-campus UC system, which educates 295,000 students, would receive an increase of $307.3 million in ongoing funding for 2022-23, including $200.5 million for the base general fund increase, $99 million for enrollment growth and more slots for California students, and additional support for former foster youths and firearms research. In addition, the budget proposes $295 million in one-time funds for climate research, innovation and entrepreneurship, dyslexia research, deferred maintenance and other needs.

UC is being asked to increase seats for California students by 6,230 for fall 2022 but is negotiating that number with Newsom’s office. The system has agreed to add about 2,000 more students each year from 2023-24 through 2026-27, with 15% of the growth at UCLA, UC Berkeley and UC San Diego, the most applied-to campuses in the system. Those three will also reduce their out-of-state and international student amount by 900 each year and replace them with Californians over the next five years.

Other performance targets include eliminating differences in graduation rates between all students and those who are low income and members of underrepresented minority groups, with half of that gap closed by 2026. UC would increase four-year graduation rates from 72.6% currently to 76% by 2030 and also agreed to better track graduation rates of students with disabilities.

To improve affordability, UC President Michael V. Drake has pledged to offer a debt-free education to all undergraduates by 2030. It will monitor progress by measuring the decrease in the proportion of California students who take out loans and graduate with debt.

“Governor Newsom’s multi-year compact reflects a partnership with the University of California that will help us maintain our excellence while expanding student access, equity, and affordability,” Drake said in a statement. “The University looks forward to working with the Governor and the state Legislature in the weeks ahead to approve these important advancements for California’s students.”

For the 23-campus Cal State system, which educates 485,550 students, Newsom’s budget provides an increase of $304.1 million in ongoing funding for 2022-23, including $211.1 million for the 5% base general funding increase, $81 million for enrollment growth, and increased support for foster youth students. The plan also includes $233 million in one-time funding to build the Cal State Bakersfield Energy Innovation Center and support farming programs and deferred maintenance.

Cal State has committed to increasing California students by 14,000 over four years and increasing four-year graduation rates by 30% by 2025. The system’s goals include eliminating equity gaps in graduation rates among low-income students and underrepresented minority students, increasing the number of students who enroll in STEM, education or social work by 25%, and reducing the cost of instructional materials by 50% by 2025, saving students an estimated $150 million annually.

“The CSU strives to ensure that a high-quality education remains affordable for all Californians, and the Governor’s proposal for predictable levels of funding for future years will allow us to meet that goal during both promising and challenging economic circumstances,” said acting Cal State Chancellor Jolene Koester.

Additionally, roughly $1.6 billion is proposed for California’s 116 community colleges — the nation’s largest higher education system — through a formula that links funding to an increase in the number of students transferring into UC and CSU, and a 20% hike in associate degrees, certificates or credentials by 2026.

The state’s community colleges experienced a significant drop in enrollment during the pandemic, as many students opted for the workforce over education. The budget allocates $150 million to build on a previous $120-million investment to assist with the colleges’ enrollment and recruitment efforts.

The office of the system’s chancellor will receive funding for 26 more staff positions this fall to help achieve the new goals.

The agreement with Newsom “sets forth a bold vision and strengthens partnerships across higher education segments to be a catalyst for economic opportunity and equitable student success in California,” said California Community Colleges Chancellor Eloy Ortiz Oakley.