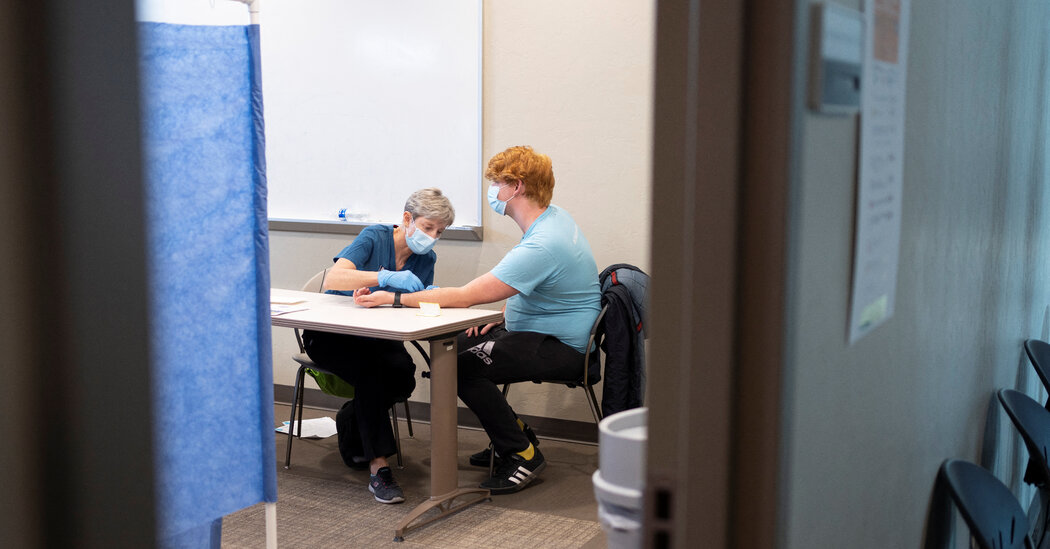 WASHINGTON — The Biden administration announced a new plan on Tuesday to send extra doses of monkeypox vaccine to states for use at events or sites that can reach more people of color and others who have lacked access to shots.

The program, called an “equity intervention pilot,” will offer 10,000 vials of vaccine, or as many as 50,000 doses, that can be distributed by local officials to five different venues. Officials said the doses were meant for people who might struggle to find appointments or worry about the stigma of attending public vaccination events.

The announcement served as a reminder that even as cases have decreased in some large cities, the nation’s inoculation campaign has lagged in getting vaccines to people who might be especially vulnerable to infection. The disease has spread primarily among men who have sex with men. A majority of confirmed monkeypox infections in recent weeks have been in Black and Hispanic people, but they have received disproportionately fewer vaccine doses. Black Americans have received roughly 10 percent of doses but have made up about a third of cases in recent weeks.

“The way that you build confidence is by really making vaccine accessible,” Dr. Demetre Daskalakis, the White House’s deputy monkeypox coordinator, said at a news briefing on Tuesday announcing the project. “Our next chapter here is not about vaccine hesitance, but about vaccine confidence, and making sure that we build in systems that really improve equity and make sure vaccines are getting not only in arms but in arms of people who really need it.”

To qualify for the extra doses, states will need to have used half of the vaccine supply they have received to date, White House officials said.

What is monkeypox? Monkeypox is a virus similar to smallpox, but symptoms are less severe. It was discovered in 1958, after outbreaks occurred in monkeys kept for research. The virus was primarily found in parts of Central and West Africa, but recently it has spread to dozens of countries and infected tens of thousands of people, overwhelmingly men who have sex with men.

How does it spread? The monkeypox virus can spread from person to person through close physical contact with infectious lesions or pustules, by touching items — like clothing or bedding — that previously touched the rash, or via the respiratory droplets produced by coughing or sneezing. Monkeypox can also be transmitted from mother to fetus via the placenta or through close contact during and after birth.

I fear I might have monkeypox. What should I do? There is no way to test for monkeypox if you have only flulike symptoms. But if you start to notice red lesions, you should contact an urgent care center or your primary care physician, who can order a monkeypox test. Isolate at home as soon as you develop symptoms, and wear high-quality masks if you must come in contact with others for medical care.

I live in New York. Can I get the vaccine? Adult men who have sex with men and who have had multiple sexual partners in the past 14 days are eligible for a vaccine in New York City, as well as close contacts of infected people. Eligible people who have conditions that weaken the immune system or who have a history of dermatitis or eczema are also strongly encouraged to get vaccinated. People can book an appointment through this website.

Dr. Daskalakis offered suggestions for sites that states could send the extra vaccines to, including pharmacy clinics, which he said had allowed Washington, D.C., to reach more underserved people. Those sites might be “less stigmatizing places for some to walk in to seek vaccine,” he said.

He also suggested that the program would target “smaller, high-impact events,” as well as clinics and organizations that so far have not received doses.

“The hope would have been that we might have learned from Covid-19 to be much more proactive, to do outreach to these same communities sooner,” said Dr. Deidra C. Crews, a professor of medicine at the Johns Hopkins University School of Medicine and the deputy director of the Johns Hopkins Center for Health Equity. “With any emerging infection, as we saw with Covid-19 a lot of times, socially marginalized communities are going to be the last to have access to either testing or vaccines.”

Dr. Crews said the vaccine equity program would likely help get trusted leaders in communities to discuss the safety of the vaccines and to encourage members of those communities to seek treatment for monkeypox.

The equity program comes soon after the Biden administration authorized a new method of vaccination called intradermal injection, which has sharply expanded the number of doses that vaccinators can extract from a single vial. Health providers can administer as many as five doses from a vial and inject them into skin layers, instead of the underlying fat. The change left the administration with nearly enough doses to cover what it considers the at-risk population for monkeypox, even after it mismanaged early efforts to bottle more supply and rush it to states.

Around three-quarters of jurisdictions have moved to the intradermal strategy, and 14 have gone through at least 85 percent of their supply, the threshold the federal government uses to send more to states.

About 94,000 first doses of the vaccine have been administered to white Americans — more than double the number given to Hispanic people and more than quadruple the number given to Black and Asian people, according to data collected by the Centers for Disease Control and Prevention. That imbalance has alarmed local and federal officials.

Dr. Daskalakis called the distribution of the 10,000 additional vials “little packages” of interventions that could help correct the imbalance.

The White House said on Tuesday that it would send additional doses to cities holding events that will likely attract large groups of gay, bisexual and other men who have sex with men, including this weekend’s Southern Decadence festival in New Orleans and Atlanta Black Pride.

Federal health officials acknowledged at the briefing that doses given at those events would not be administered in time for recipients to acquire fuller protection, which comes weeks after a second dose. But they said that the events were an opportunity to reach people who have so far not had a chance to get vaccinated in places they might feel comfortable getting a shot.