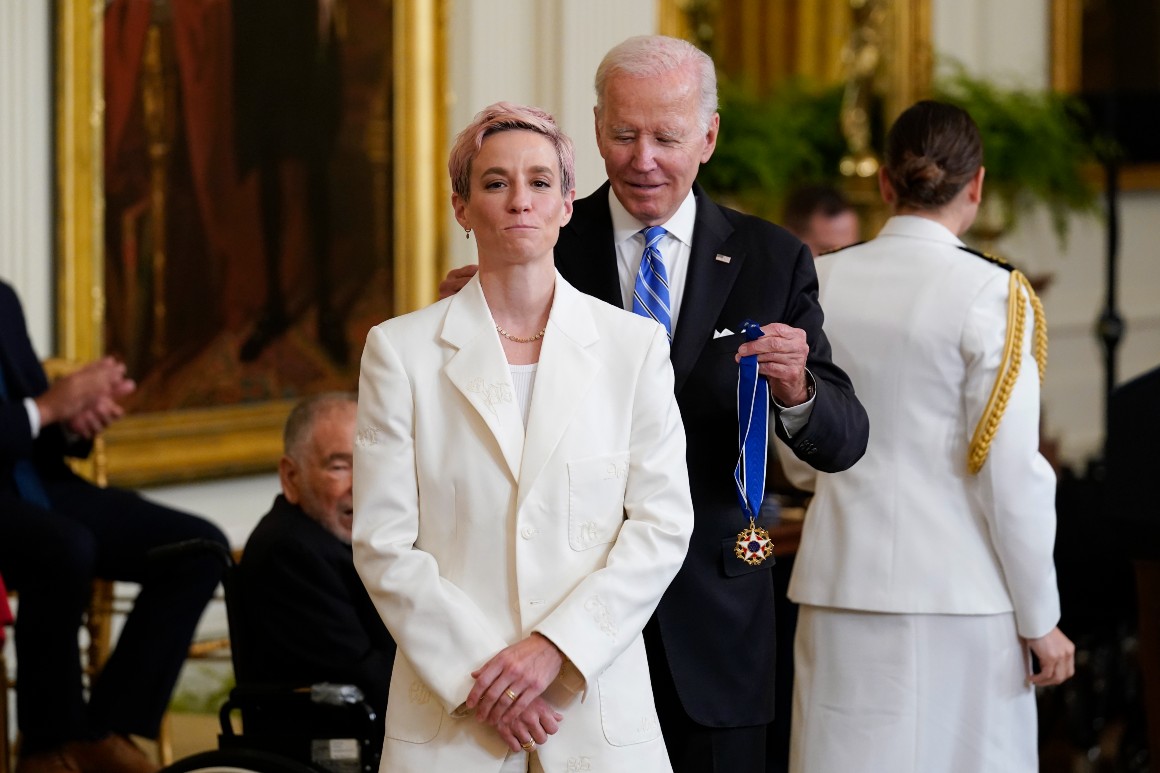 While Griner’s detention has galvanized numerous prominent athletes like LeBron James, Steph Curry, and others, Rapinoe has been one of the more outspoken on the issue. During an impassioned speech at the ESPYs, she called for Griner’s release. And she wore a white suit with the letters “BG” emblazoned on the lapel as a tribute to Griner when Biden bestowed the medal of freedom on her in July.

The public and private pressure campaign from Griner’s family and prominent celebrities like Rapinoe has had an impact. In the days after the two talked, Biden got on a call with Griner’s wife Cherelle Griner, who had publicly expressed frustration with the Biden administration over the length of the WNBA superstar’s detention, and the pace of negotiations. Griner’s team also enlisted Karen Finney, a veteran Democratic strategist, to help galvanize some of the president’s supporters to bring attention to the case. Since then, the administration has gradually moved to acknowledge it’s engaged in a potential deal to get the WNBA superstar and former U.S. marine Paul Whelan home from Russia. The duo are part of talks that also involve the potential exchange of Viktor Bout, an arms dealer serving prison time in the U.S. who Russia has been lobbying to get back for years.

But progress remains elusive. The basketball star’s camp is currently in wait-and-see mode as the case continues to make its way through the Russian legal system with Griner’s Russian legal team earlier this week appealing her conviction on drug smuggling charges. Many of the biggest advocates for her release have largely gone quiet in an attempt not to disrupt ongoing negotiations: Griner’s wife has ceased participating in national media appearances for the moment. A Russian official said on Thursday that the U.S. and Russia were engaged in “quiet diplomacy,” over the detention of the WNBA superstar.

Remarkably, as the Griner saga plays out, Russia-based basketball teams are still attempting to recruit U.S. players to their leagues.

According to one international basketball industry insider, offers have been made to play this year, even as Griner lingers in a Russian jail. But after reaching out to representatives for professional basketball players who played in Russia last year, West Wing Playbook could not find a single U.S. basketball player who actually planned to compete professionally in the country, at least this year. At least one sports agent told West Wing Playbook that the players were opting to play in other international leagues instead. Stefano Meller, whose agency represents American power forward Aaron Carver — who played for a Russian basketball team last year — said he would be playing in Italy this year.