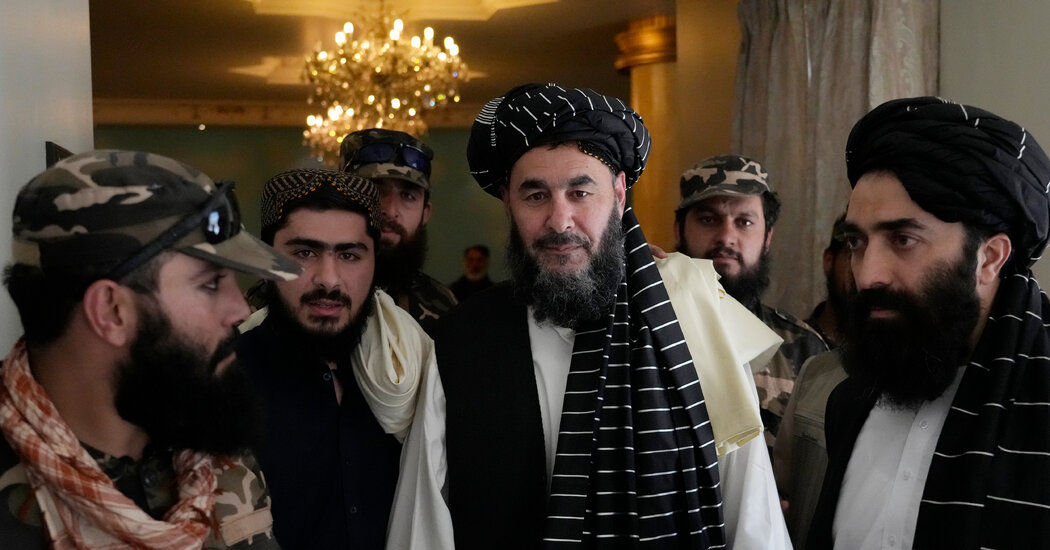 KABUL, Afghanistan — The Taliban government of Afghanistan on Monday said that it had freed an American engineer, Mark R. Frerichs, in exchange for the release by the United States of a prominent Afghan tribal leader who had been convicted of drug trafficking.

The release of the tribal leader, Haji Bashir Noorzai, who has close ties to the Taliban, was hailed by supporters of the group as a major symbolic victory and a public sign of the Taliban’s enduring loyalty to its supporters.

During a news conference in Kabul, the Taliban’s acting foreign minister, Amir Khan Muttaqi, said that Mr. Frerichs, who had been held by the Taliban since 2020, had been handed over to the U.S. authorities at Kabul International Airport on Monday morning.

In return, the United States released Mr. Noorzai, a prominent financier of the Taliban in the 1990s who is known for his close ties to the group’s founder, Mullah Mohammad Omar. Mr. Noorzai was convicted in the United States in 2008 of being part of an international narcotics trafficking conspiracy and sentenced to life in prison.

The Taliban “is ready to solve problems by negotiation with all including the United States,” Mr. Muttaqi said at the news conference, sitting alongside Mr. Noorzai, who returned to Afghanistan on Monday after his release by U.S. authorities.

A senior American official, who was not authorized to speak to the press and requested anonymity, confirmed the exchange.

President Biden said in a statement released by the White House on Monday that “the negotiations that led to Mark’s freedom to a successful resolution required difficult decisions, which I did not take lightly.” He did not provide details about the negotiations or the decisions, but said that his administration “continues to prioritize the safe return of all Americans who are held hostage or wrongfully detained abroad.”

It was the first known prisoner exchange between the United States and the Taliban since the group seized power in Afghanistan last year. The deal may bolster pragmatists within the Taliban leadership who have frequently clashed with the group’s top ideologues over the new government’s willingness to moderate on key policy issues — like allowing girls’ education — in order to meaningfully engage with the international community, analysts say.

“This is tangible delivery for Taliban diplomacy and may counterbalance against some of the more isolationist factions — particularly in Kandahar — who just don’t see a point in speaking to foreigners,” said Graeme Smith, a senior consultant for the International Crisis Group who focuses on Afghanistan, referring to the southern heartland of the Taliban.

Once listed by the United States as one of the world’s most wanted narcotics dealers, Mr. Noorzai was a prominent drug baron in Kandahar Province for decades. He earned a reputation in the 1990s as a major financier of the movement and a trusted associate of Mr. Omar, the group’s founder.

After the United States invaded Afghanistan in 2001 and toppled a previous Taliban government, Mr. Noorzai repositioned himself as an asset to American forces. He delivered U.S. troops huge caches of weapons the Taliban had stashed across the province, promised to use his influence among his southern tribe to stabilize the region and became known as one of Kandahar’s most prominent power brokers.

But within months, his relationship with the Americans soured and he fled to neighboring Pakistan where he continued in the drug trade. In 2005, he came to New York to meet with U.S. officials who claimed the United States was interested in speaking with him about terrorism financing. But the meeting was a trap, he later testified. He was arrested 11 days later.

Upon his return to Afghanistan on Monday morning, Mr. Noorzai was greeted by a large crowd of Taliban security forces, dressed in black, who draped strings of brightly colored flowers around his neck as he shook their hands triumphantly, a video showed.

“I am proud to be in the capital of my country among my brothers,” Mr. Noorzai said at the news conference later Monday.

The prison swap also capped a two-year long saga since Mr. Frerichs, a former Navy diver who was working as a contractor in Afghanistan, was captured and taken hostage in January 2020. The kidnapping triggered a countrywide hunt to find Mr. Frerichs, whose release was raised during peace talks between the United States and the Taliban but ultimately left unresolved.

Locating him became a priority for Americans officials after the United States and Taliban officials signed the Doha peace agreement in February that year and Western troops prepared to withdraw from the country.

“I am so happy to hear that my brother is safe and on his way home to us,” Charlene Cakora, Mr. Frerichs’ sister, said in a statement. “We never gave up hope that he would survive and come home safely to us.”

At least one other American, Ivor Shearer, is in Taliban custody. Mr. Shearer was working as an independent filmmaker in Kabul when he was detained along his Afghan producer in August, according to the Committee to Protect Journalists, a press watchdog.

The exchange on Monday was the first major, public act of cooperation between the United States and the Taliban since an American drone strike killed the leader of Al Qaeda, Ayman al-Zawahri, in downtown Kabul in August.

The strike drew a sharp rebuke from Taliban officials, who characterized it as a violation of Afghanistan’s sovereignty, and raised questions about whether a new era of U.S. strikes in Afghanistan had begun. At the same time, the public revelation that the Taliban had been sheltering a key plotter of the Sept. 11, 2001, terrorist attacks on the United States appeared to push the country further toward pariah state status.

In the weeks since, the United States and Taliban have clashed over another key policy issue: The use of funds that President Biden had frozen and seized from Afghanistan’s central bank after the Taliban took over the country last year.

Last week, the Biden administration moved to establish a foundation based in Switzerland that would begin spending $3.5 billion of those funds to address the humanitarian catastrophe unfolding in Afghanistan, while keeping the funds out of the Taliban’s hands.

The Taliban condemned the move, warning that if the United States proceeded with those plans they “will be forced to impose fines against, and ban activities of, all individuals, institutions and companies that facilitate this illegal venture and seek to misuse Central Bank reserves for humanitarian and other purposes,” according to a statement from the Taliban’s Ministry of Foreign Affairs.