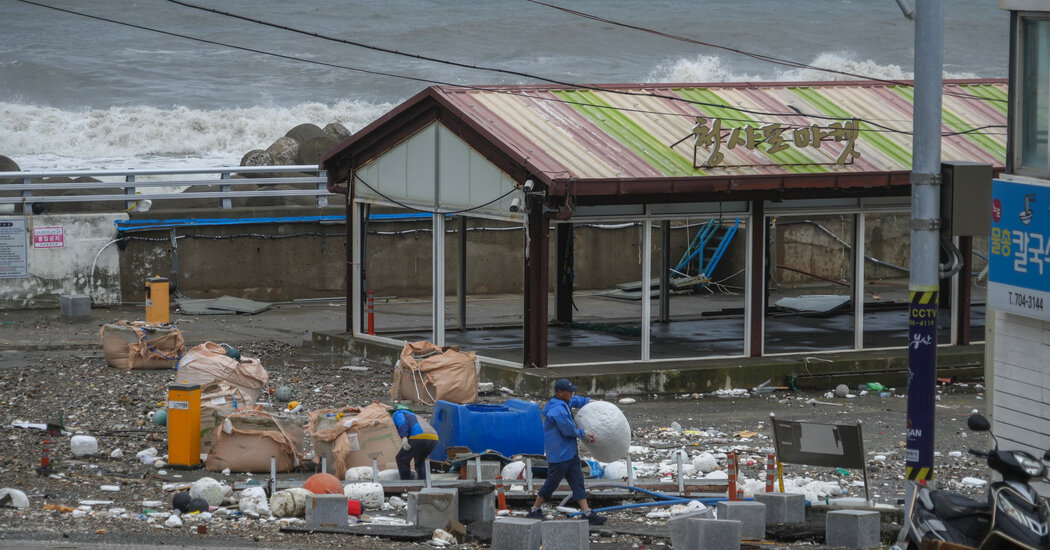 Typhoon Hinnamnor made its way back out to sea on Tuesday morning, after slamming South Korea with heavy rain and wind overnight. There were reports of isolated flooding, but the damage across the country appeared to be limited early on Tuesday.

The storm passed Jeju Island at midnight local time and made landfall on the southern coast of the Korean Peninsula at 4:50 a.m. before heading back out to sea at about 7:10 a.m. It was downgraded to “strong” from “super strong” with winds up to 96 miles per hour being observed, the Korea Meteorological Administration said. The whole nation, except Incheon and Seoul, remained under heavy rain warnings.

There were no reports of deaths as of Tuesday morning. But heavy rain and strong winds knocked down trees and walls and caused flooding and power outages across South Korea. In South Gyeongsang Province, where 2,000 people had been evacuated from their homes, the fire department responded to about 200 emergencies related to the typhoon as of early Tuesday morning.

“The winds were insane and it was pouring,” said Kim Sun-myeong, who was staffing a convenience store in the southern city of Busan on Tuesday morning, adding that another store across the street was closed because of the typhoon.

The winds had calmed and the rain had stopped by about 7 a.m., he said. The city’s train and bus service was restored and access to some of the roads had been restored. But the winds had broken off the outdoor lighting used to illuminate the sign to Mr. Kim’s store.

“A giant bird got drenched by the rain and is tottering on its legs on our street,” he said.

This is the second major storm to hit the country in a matter of weeks. Last month, Seoul, the capital, witnessed its heaviest downpour in decades, causing floods that killed at least nine people. The storm damaged some subway stations and led to minor power and water outages. President Yoon Suk-yeol promised measures to prevent such damage from happening again.

The Korea Meteorological Administration said most of the nation would see four to 12 inches of rain and winds would peak at 134 miles per hour. Over the weekend, the government issued its most severe typhoon warning, the highest-level alert in five years.

The storms this rainy season have been particularly strong, and forecasters have said that Hinnamnor’s force may be comparable to that of two devastating typhoons from two decades ago, Rusa and Maemi. In 2002, Typhoon Rusa swept across the nation, leaving dozens dead and destroying more than a million homes. The following year, Typhoon Maemi killed more than 100 people and caused $1.6 billion in damage.

The terms typhoon and hurricane refer to tropical cyclones and are applied to storms depending on where they originate. Typhoons develop in the northwestern Pacific and usually affect Asia. Hurricanes form in the North Atlantic, the northeastern Pacific, the Caribbean Sea or the Gulf of Mexico.

In the Atlantic, major hurricanes are defined as tropical cyclones with maximum sustained winds of 111 m.p.h. or higher, and defined as either Category 3, 4 and 5 storms. But in the Asia Pacific region, there are variations in how countries grade typhoons.

The links between tropical storms and climate change are becoming more apparent. Researchers have found that warming has increased the frequency of major storms because a warmer ocean provides more of the energy that fuels them.

In South Korea, flooding was already occurring late Monday on Jeju Island, about 60 miles south of the Korean Peninsula, where businesses and public facilities have shut down temporarily and some flights and ferry services have been canceled.

Cities have mobilized to prepare for the storm, with Busan deploying 7,600 civil servants for emergency response and elementary and middle schools in Seoul closing temporarily.