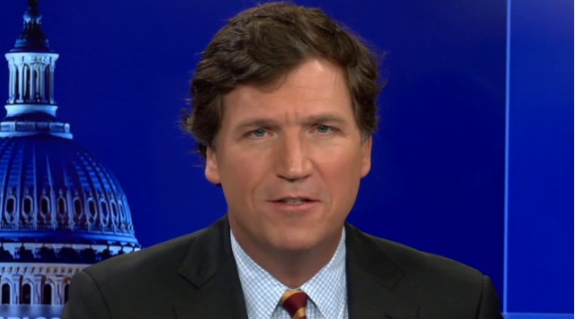 In a speech streamed on Fox Nation, Carlson, host of “Tucker Carlson Tonight” and “Tucker Carlson Today,” spoke at length on several subjects, including the press, some Republicans’ penchant to be more concerned with their media image than voters’ approval, Democrats’ damaging far-left governance, and the reason many in the leftist establishment abhor religion and specifically Evangelical Christian groups.

Carlson said it is often easy to let one’s own ideological “side” slide when the opposition is entirely “unacceptable.”

“Particularly if you’re a Christian,” he added, pointing to the left flank of the Democratic Party’s critiques of Evangelical Christian groups and aligned political candidates.

BIDEN GETS ABANDONED BY TOP DEMOCRATS AS PRITZKER, NEWSOM ‘MEASURE DRAPES’ AT WH

Carlson said the aversion to organized religion and particularly Christianity is “one of the animating forces” on the left.

“They hate that worldview because it’s a challenge to their worldview of dominion,” he said of contemporary liberals.

“Religious faith is a natural check on their power – and Christianity specifically is that – so if you’re a Christian conservative – holy smokes, you, on a gut-level, feel threatened.”

Carlson told the audience that though there is a lot of “dissatisfaction” with Republican leaders on that front and others, they are often the default choice because the other side “is so menacing… [and has] fully embraced delusion [with] extremely high levels of aggression.”

In 2016, many centrist and independent Americans chose to support Trump over Hillary Clinton because, comparatively, they believed she was worse than the real estate developer’s political unknown-quantity candidacy.

On the 2024 presidential election, Carlson said Biden is effectively not running, but cannot say so because he would become an “immediate lame duck.”

“[T]his coming election is one of those weird moments – as of right now – [there is an] open field,” he said.

One can almost “guarantee for a mad scramble for power [on] approximately the first Wednesday of November [when] the pres campaign [informally] begins.”

For those Iowans who might soon run into a prospective candidate – namely former Rep. Beto O’Rourke, D-Texas — while retrieving their newspaper in the morning, Carlson suggested they take their first-in-the-nation opportunity seriously to “make them obey.”

“[Politicians are] very simple organisms… in the stimuli to which they respond – they want to win elections,” he said.

Carlson later further discussed how Republicans seem to seek to squander their opportunity to show a true dichotomy from the left and the establishment, when figures like Sens. Mitch McConnell, R-Ky., or Lindsey Graham, R-S.C., tell the public the most “important thing in the world is to vanquish Vladimir Putin.”

The host laughed off continued attacks from the establishment that he cares at all about the Kremlin leader, asking the crowd instead if on a personal level, they believe anything the ex-KGB agent does in Ukraine, while “historically significant”, is at all “more significant than what gas costs.”

“The rising price of fossil fuels is not an inconvenience; it’s the whole story,” he said, pointing to how countries with solid fossil fuel reserves and strong energy grids are often more prosperous and produce humans with longer life expectancies.

He also noted the United States has larger combined oil and gas reserves than any nation in the world, including the OPEC states, a fact oft ignored or undermined by the Biden administration.

With the left-wing green movement out in full force against domestic exploration and production, Carlson questioned the issue-based legitimacy of such activists:

“How many people at the Sierra Club could name 3 bird species or tell the difference between spruce and hemlock?” he said, adding they have no idea what an energy grid actually is, and suggested an easy test to decide whether to take them seriously:

“You can’t drive a standard transmission? No infrastructure for you – you go back to the gender studies department and do your little thing and fight with your colleagues over tenure – but you’re not getting close to physical things that are required for the [operation] of my country.”

“Get your stupid wind turbine off of there and slink back to New York.”

Fox Nation programs are viewable on-demand and from your mobile device app, but only for Fox Nation subscribers. Go to Fox Nation to start a free trial and watch the extensive library from your favorite Fox Nation personalities.

Charles Creitz is a reporter for Fox News Digital.