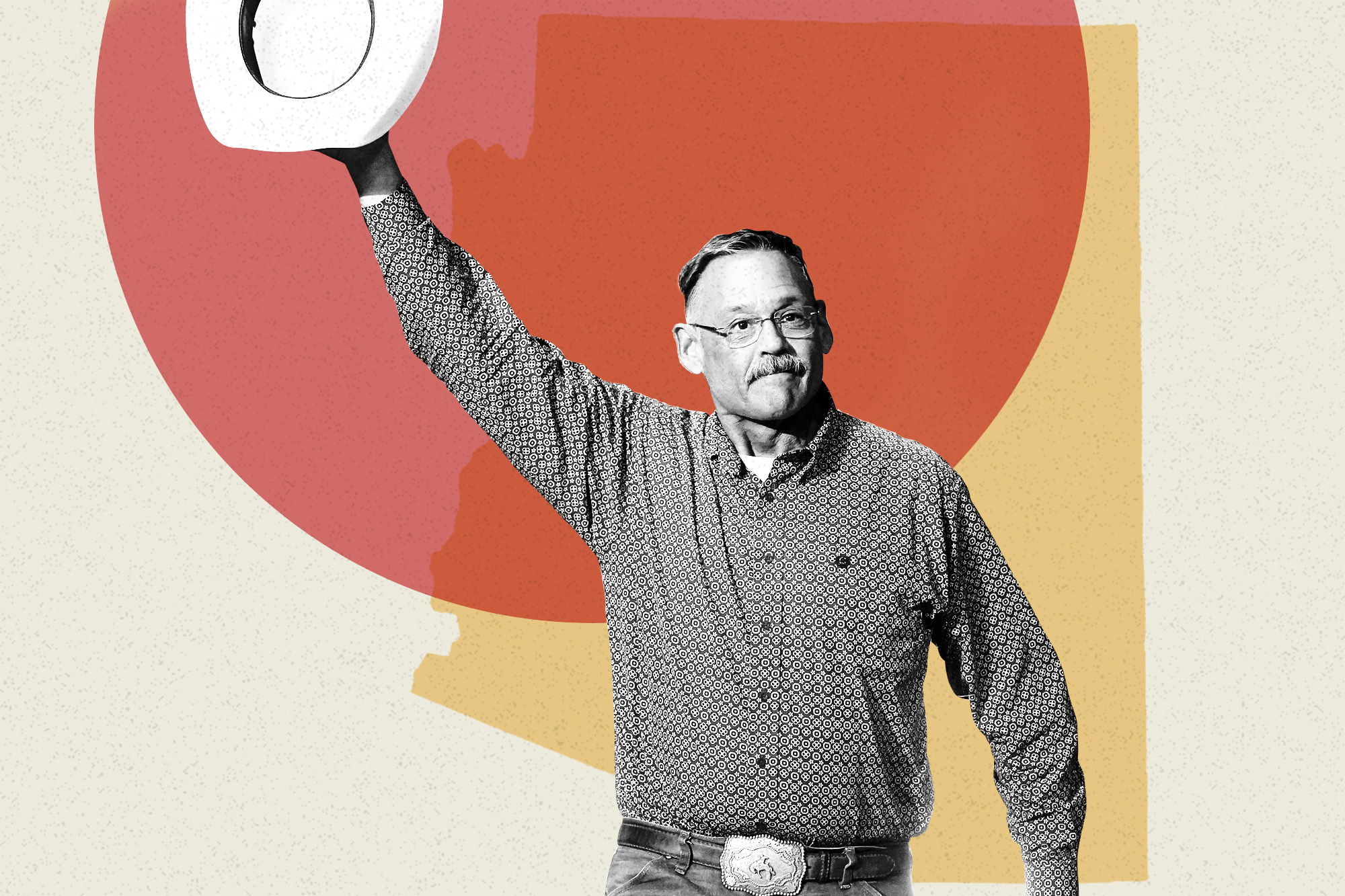 “It’s basically from political gadfly within the Republican caucus to potentially the number two person in the state of Arizona,” says Arizona Republican Sen. T.J. Shope. “It’s a meteoric rise.”

“Never in a million years” would Paul Boyer, a fellow GOP state legislator, have imagined that Finchem would crush a field of qualified candidates and win a nomination to statewide office.

“Mark is known as the guy that’s probably the dumbest — well, there’s a long list, but one of the dumbest — legislators in the state House,” he says. (Finchem’s retort: Boyer is an “utter disgrace.”)

But Finchem’s rise makes sense in light of the broader shift within the Arizona Republican Party. Trump’s slate of political insurgents swept the GOP nomination for every state office in which he offered his blessing, from the U.S. Senate down to state Senate races.

After decades of civil war, the Arizona primaries mark a decisive swing in the state GOP’s balance of power. The center-right, pro-business wing of the party led by the late Sen. John McCain and Gov. Doug Ducey has been defeated, at least for now. Finchem and other far-right outsiders — the original tea party activists and the new Trumpist hard-liners — have taken over.

“We drove a stake through the heart of the McCain machine,” Republican gubernatorial nominee Kari Lake bragged, while making a stabbing motion, at a CPAC event following the primary. “We threw together a rag-tag team of nonpolitical people to run the most exciting campaign in the country. And we won.”

Lake, a former TV news anchor, fended off more than $20 million in spending against her to narrowly capture the nomination, despite her opponent’s backing from Ducey, former GOP Gov. Jan Brewer and former Vice President Mike Pence.

Blake Masters, a 36-year-old acolyte of billionaire tech entrepreneur and Trump donor Peter Thiel, surged from behind in the U.S. Senate primary after earning Trump’s nod. Abraham Hamadeh, a 31-year-old lawyer who has spent fewer days in a courtroom than many petty criminals, was rocketed out of obscurity to win the primary for state attorney general after snagging Trump’s endorsement.

None have any political experience. But they have the main qualification that matters to the former president: They repeat the lie that the Arizona election was rigged against him. Every winning Republican candidate said they wouldn’t have certified the 2020 election. That means that as Trump gears up for a possible third run for the presidency, Arizona is facing the prospect of a slate of statewide officials who could steal the election for him. (Indeed, another victim of a Trump-backed primary was Rusty Bowers, the soft-spoken leader of the Arizona House who rebuffed Trump’s pressure campaign to overturn the state’s 2020 election results and testified to the January 6 committee.)

For his part, Finchem defeated three other candidates for the secretary of state nomination: Beau Lane, an advertising executive who had backing from the business community and Ducey’s full-throated endorsement; state Rep. Shawnna Bolick who had sponsored legislation to let lawmakers toss out the results of presidential elections they don’t like and had tried to capture the Trump vote; and state Sen. Michelle Ugenti-Rita, who has been the architect of every major “election integrity” bill that has been signed into law for the past decade, but who refused to regurgitate the lie that Arizona’s election was stolen from Trump. Finchem beat them all by wide margins.

It’s not an overstatement to say Finchem remains a bit of a joke to his soon-to-be old colleagues.

Boyer, who served eight years in the Arizona Legislature alongside Finchem, cackled while recalling Finchem’s doomed 2020 run for speaker against Bowers. Finchem wrote a seven-page memo outlining his vision for the job, including his top priority: using viral content to take the messaging power back from the media. And he did prove that he knew how to go viral.

“The use of mime’s [SIC] is an emerging means of harnessing rhetoric and sarcasm with a purpose,” Finchem declared with a repeated typo of the word “meme,” which became a local meme itself. “The regular use of mime’s to build brand identity and establish solid differentiation will serve us well.”

Less than a third of the Republican caucus ultimately backed Finchem to become the speaker, but it cemented his status as the leader of the far right at the state Capitol.

Finchem has always been something of an underdog and outcast at the state Capitol. In his eight years as a lawmaker, he has only once been granted a committee chairmanship; typically, even junior Republican lawmakers get prime posts. He had just one bill signed into law this year — fewer than many Democrats who sit in the minority — and he hasn’t fared much better in past years.

“Abe Hamadeh for AG? Kari Lake for governor? It’s very simple. If you can fog up a mirror and win the ‘Arizona Apprentice,’ you’re good.”

Boyer, meanwhile, chose not to run for reelection after receiving death threats for refusing to go along with his party’s election lies. So just two years after his failed run for leadership, Finchem is on top. And those who laughed at his vision have been purged from Arizona’s political landscape.

In many ways, Finchem is a man made for the times. He’s a longtime leader of the legislature’s far-right “Liberty Caucus,” and is revered in conservative grassroots circles as one of the few “good lawmakers.”

He refused to do a phone interview for this article, but he did send a few text messages, saying if he’s having a moment in the sun, it’s because like him, the people are no longer afraid to be bullied by the establishment.

“I am but a humble servant who took the time to listen to his constituents and has been vilified for it,” he wrote. “Perhaps that’s why they view me as their champion.”

Originally from the Detroit area, Finchem moved to Arizona in 1999 and began a career as a realtor. (He had previously been a cop in Kalamazoo, Mich., where his final evaluation reads “poor rating, would not rehire.”) He later became vice president of business development for Clean Power Technologies LLC, an Idaho-based company that claimed on its now-defunct website that it can generate and deliver clean energy “without wires, anywhere around the world.”

Finchem was an early adopter of fringe politics in Arizona. He was touting state sovereignty issues long before phrases like “plenary powers” and the “independent state legislature doctrine” entered the mainstream political lexicon. Armed not with a law degree, but a masters in legal studies from the University of Arizona’s “freedom school,” Finchem became the thought leader of the movement to decertify the 2020 election in Arizona.

After losing his head-to-head contest with Bowers for the speakership in late 2020, Finchem held an unauthorized, unofficial “hearing” with Rudy Giuliani and other members of Trump’s legal team to air falsehoods about how the election was rigged. That hearing cemented his status as one of the key ringleaders of Arizona’s “Stop the Steal” movement and helped earn him the Trump endorsement that rocketed him to national stardom on the right.

Just a few weeks later, Finchem was outside the U.S. Capitol at the Jan. 6 riot. Though he maintains he never entered the building, video footage shows he was much closer than he originally claimed. Ali Alexander, the organizer of the rally that helped fuel the deadly mayhem, declared there wouldn’t have been a Stop the Steal movement in Arizona without Finchem.

CNN reported this week that Finchem previously shared posts on social media about stockpiling ammunition and touted his membership in the Oath Keepers anti-government extremist group, which is under scrutiny for its role in the Jan. 6 insurrection.

Finchem is still pushing baseless theories about how the election was rigged, texting a link to a conservative activist project that he claims shows the “Chinese Communist Party now has operational control over many elections across the United States because they control the servers where all of the electronic data sits.”

“What boggles my mind is reporters and journalists are sitting on the story of the century but nobody has the balls to write about it,” he wrote in a text.

The 2022 primaries underscored just how tight Trump’s grip is over Arizona Republicans, and that his 2020 loss is still fresh on these voters’ minds as he considers another run for the presidency.

How could it not be? In Arizona, it feels like the 2020 election is still ongoing.

Republicans in this state, perhaps more than any other, have followed Trump’s election conspiracies down the rabbit hole.

First there was the Cyber Ninjas’ audit authorized by the state Senate, which ultimately confirmed through a hand count of ballots that President Joe Biden won, but which offered up a host of other debunkable conspiracies about how maybe he didn’t win. Then there’s the still-ongoing investigation by the Arizona attorney general about alleged improprieties in the election, which uncovered a handful of record-keeping issues, but no proof of any widespread fraud, including from dead people voting.

Meanwhile, Arizona Republican Party Chair Kelli Ward not only continues to spout Trump’s fantasies about the election; she broke with the chair’s long-standing tradition of neutrality to throw her full weight behind the MAGA candidates in the primary, calling the Trump-opposed candidates RINOs and worse. The sycophantic pro-Trump student group Turning Point USA also is based in Arizona and deeply intertwined with the party infrastructure.

Trump himself has seen Arizona as key to keeping his political future alive. He’s traveled to the state twice since losing the 2020 election. In January of this year, he came to promote his candidates and spin election yarns. And during the first weeks of early voting, he returned with pillow salesman and conspiracy-slinger Mike Lindell, who warmed up the crowd by claiming, once again, that the election was rigged and that the state is poised to do away with “defective” vote tabulating machines.

But just as important, Arizona’s mainstream conservatives have cowered to the lie that the election was stolen from Trump. While some, including Ducey, have attempted to tamp down on the rhetoric, none have forcefully confronted Trump’s disinformation.

On the same day as Trump’s latest rally for his candidates, Pence and Ducey stumped for their pick in the gubernatorial primary: Karrin Taylor Robson. Robson criticized Lake for saying the primary election was rigged against her before votes had even been cast, but Robson refused to say that the 2020 election was free and fair, saying she wasn’t sure if she would have certified Arizona’s 2020 election if she were governor.

“We have the wrong guy in the White House,” she said, while repeatedly refusing to clarify whether Biden was wrongfully elected or simply the wrong guy for the job.

Lane, Finchem’s business-backed opponent, would say the election wasn’t stolen when asked. But he never made it a central point of his campaign in an overt way. Instead, he took to the airwaves with criticism of Finchem for having supported a National Popular Vote bill, saying if Finchem had his way, Hillary Clinton would have been president.

In a state where even the mainstream conservative candidate for the top election official doesn’t forcefully articulate a message that the 2020 election was safe, secure and legitimate, it shouldn’t be a shock that Republican voters backed a slate of candidates that’s likely to be willing to throw out the results of the 2024 election.

Whether Finchem and his fellow Trumpists will find success in November is less clear.

In Arizona’s purple political landscape, Democrats and even many Republicans here say GOP primary voters went too far — that they’ve undermined the party’s chances of holding the state’s top offices in an otherwise great year for Republicans. Perhaps that could break the fever, as Barack Obama once predicted, before the party went even further to the right under Trump.

“It may take a drubbing at the polls this year to get Republican voters off the Trump train,” says Arizona Republican consultant Barrett Marson. “Or maybe they’ll just double down.”