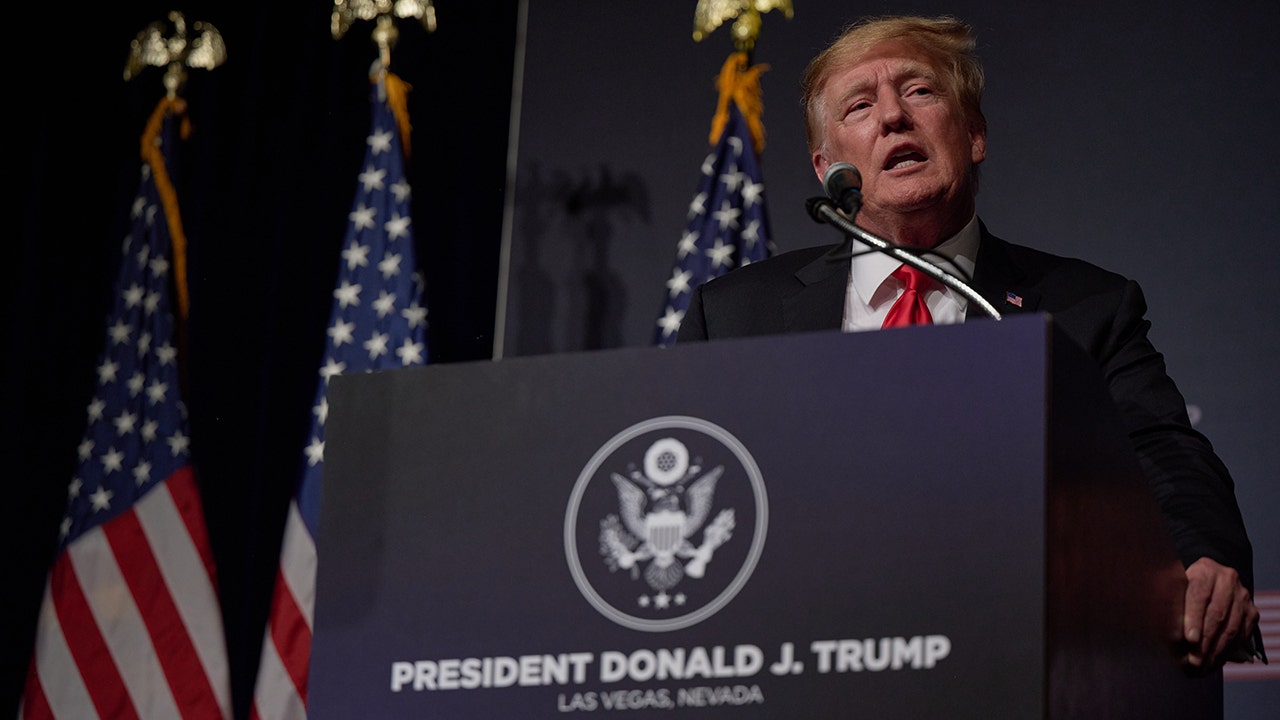 Former President Donald Trump used a rally in Las Vegas Friday night to criticize President Joe Biden and “lawlessness” that exists in cities across the country.

“We will not have a country left if this growing barbarism is not quickly reversed and stopped, the wave of lawbreaking must be immediately ended, and we must really get this crime wave ended immediately,” Trump said. “If we are going to make America great again, our first task is to make America safe again.”

The former president quickly turned his attention to the Biden administration, which he claimed was responsible for allowing crime and “lawlessness” to thrive in major cities across the country.

“On behalf of everyone here, let me express our everlasting respect and gratitude for all of the law enforcement officers with us this evening,” Trump started. “In the Republican Party, we proudly back the blue, much different from ‘Defund the police,’ and that will never, ever change.”

TRUMP CONSIDERING EARLY 2024 ANNOUNCEMENT AMID OPPOSITION FROM OTHER REPUBLICANS: REPORTS

“We’re gathered tonight to discuss what we must do to stop the deadly wave of lawlessness and chaos that has been sweeping across our land like we’ve never seen before,” Trump said, also criticizing House Speaker Nancy Pelosi and Senate Majority Leader Chuck Schumer.

“The rule of law has been collapsing before our very eyes under the weak on crime policies of the Biden administration, the Pelosi-Schumer Congress, radical left Democrats at the state and local level.”

Trump also blamed “everybody else” who “are afraid to be strong and sharp and tough and smart” as they “are always striving to be politically correct.”

“Civilization itself is right now under siege and we can’t be just politically correct,” he said.

The former president then offered a blanket criticism of Democratic politicians as Democratic-controlled cities are seeing record-high crime rates.

“Last year, sixteen US cities set an all-time homicide record. Murders nationwide reach their highest rate in 25 years and are soaring to levels that we’ve never seen before,” he said.

Trump continued: “Carjackings are up 200 percent and even 300 percent in certain areas.”

“People are leaving these [Democrat-run] cities” as “organized mobs are pillaging small businesses,” he said. Trump added, before calling Chicago a “war zone.”

TRUMP MOURNS JAPAN’S SHINZO ABE, ‘A UNIFIER LIKE NO OTHER’ WHO ‘CHERISHED HIS MAGNIFICENT COUNTRY’

Trump then pivoted his law and order remarks to focus on the U.S.-Mexico border, just a week after 53 migrants were found dead or dying in a tractor-trailer in Texas.

“Our border is in a state of brutal and violent anarchy as people totally unvetted and unchecked flow into our country by the millions. To put it simply, we are a nation in decline,” Trump said. “We are a failing nation.”

“We’ve never had anything like what’s going on right now. Our country has been knocked to its knees, humiliated before the world. Yet we presume to lecture other people in other countries on their democracies. All the while, the streets are flowing with the blood of innocent crime victims, as we lecture others,” the former president said.

Former President Donald Trump speaks after a panel on policing and security at Treasure Island hotel and casino on July 8, 2022 in Las Vegas, Nevada.
(Photo by Bridget Bennett/Getty Images)

Trump then potentially hinted at a 2024 run when he offered a solution for turning around the country.

WHITE HOUSE CALLED OUT FOR COVER-UP OF BIDEN TELEPROMPTER GAFFE: ‘PAID TO LIE FOR A LIVING’

“We need leadership that will let this happen. So this is a little controversial and I will either get a standing ovation, and I don’t care about the ovation I care about the country, or people are going to walk out of the room for what I am about to say. But it’s time finally to say it: I did a really good job with drugs on our border. Perhaps nobody is more aware of the drug problem in our country than I am. I worked very hard on it for four years.”

Ahead of his remarks, Trump paid tribute to former Japanese Prime Minister Shinzo Abe, who was assassinated on Friday.

“I’d like to express my condolences to the family of a great, great man, Shinzo Abe,” the 45th U.S. president said.

Trump called Abe a “tough negotiator” that he knew well. “We could use a negotiator like that in our country,” he added.

“This was a man with tremendous moral courage, a fantastic person. Prime Minister Abe was a friend of mine, an ally, an incredible patriot, he was a tireless champion for peace and for freedom and for the priceless bond between the United States and Japan,” Trump said. “And his assassination is not only a grievous atrocity, it’s a devastating loss for the entire world.”

“We will miss him greatly. And based on this being a speech about law and order, I hope that the man who committed this crime will pay a swift and steep price for the greatness he has taken from our planet,” he added.

Earlier in the day, Trump took to social media shortly after news of the assassination surfaced to pay tribute to Abe.

“Few people know what a great man and leader Shinzo Abe was, but history will teach them and be kind,” Trump said in a post on his Truth Social. “He was a unifier like no other, but above all, he was a man who loved and cherished his magnificent country, Japan. Shinzo Abe will be greatly missed. There will never be another like him!”