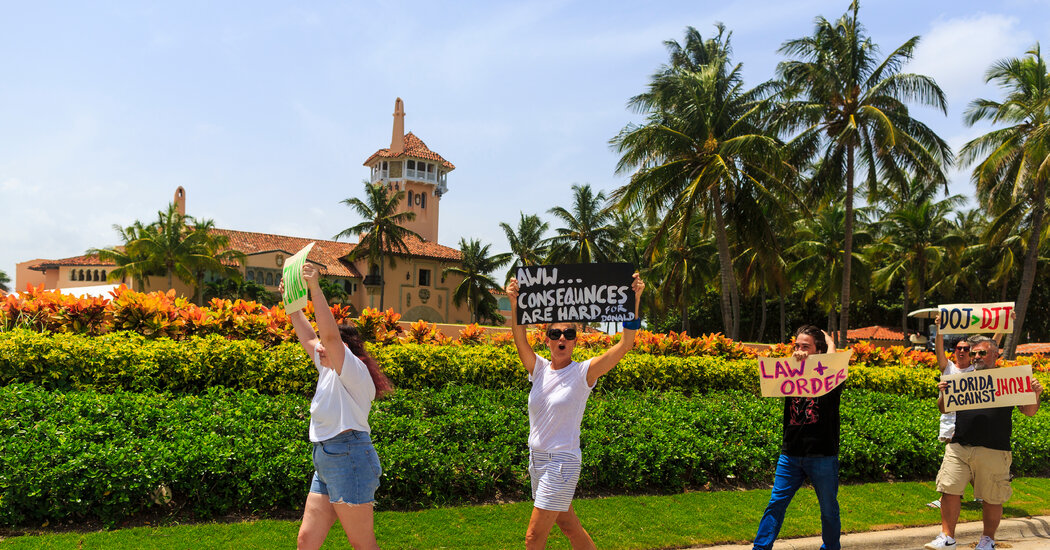 The initial batch of documents retrieved by the National Archives from former President Donald J. Trump in January included more than 150 marked as classified, a number that ignited intense concern at the Justice Department and helped trigger the criminal investigation that led F.B.I. agents to swoop into Mar-a-Lago this month seeking to recover more, multiple people briefed on the matter said.

In total, the government has recovered more than 300 documents with classified markings from Mr. Trump since he left office, the people said: that first batch of documents returned in January, another set provided by Mr. Trump’s aides to the Justice Department in June and the material seized by the F.B.I. in the search this month.

The previously unreported volume of the sensitive material found in the former president’s possession in January helps explain why the Justice Department moved so urgently to hunt down any further classified materials he might have.

And the extent to which such a large number of highly sensitive documents remained at Mar-a-Lago for months, even as the department sought the return of all material that should have been left in government custody when Mr. Trump left office, suggested to officials that the former president or his aides had been cavalier in handling it, not fully forthcoming with investigators, or both.

The specific nature of the sensitive material that Mr. Trump took from the White House remains unclear. But the 15 boxes Mr. Trump turned over to the archives in January, nearly a year after he left office, included documents from the C.I.A., the National Security Agency and the F.B.I. spanning a variety of topics of national security interest, a person briefed on the matter said.

Mr. Trump went through the boxes himself in late 2021, according to multiple people briefed on his efforts, before turning them over.

The highly sensitive nature of some of the material in the boxes prompted archives officials to refer the matter to the Justice Department, which within months had convened a grand jury investigation.

Aides to Mr. Trump turned over a few dozen additional sensitive documents during a visit to Mar-a-Lago by Justice Department officials in early June. At the conclusion of the search this month, officials left with 26 boxes, including 11 sets of material marked as classified, comprising scores of additional documents. One set had the highest level of classification, top secret/sensitive compartmented information.

The Justice Department investigation is continuing, suggesting that officials are not certain whether they have recovered all the presidential records that Mr. Trump took with him from the White House.

Even after the extraordinary decision by the F.B.I. to execute a search warrant at Mar-a-Lago on Aug. 8, investigators have sought additional surveillance footage from the club, people familiar with the matter said.

More Coverage of the F.B.I. Search of Trump’s Home

It was the second such demand for the club’s security tapes, said the people familiar with the matter, and underscored that authorities are still scrutinizing how the classified documents were handled by Mr. Trump and his staff before the search.

A spokesman for Mr. Trump did not immediately respond to a request for comment. A spokeswoman for the F.B.I. declined to comment.

Mr. Trump’s allies insist that the president had a “standing order” to declassify material that left the Oval Office for the White House residence, and have claimed that the General Services Administration, not Mr. Trump’s staff, packed the boxes with the documents.

No documentation has come to light confirming that Mr. Trump declassified the material, and the potential crimes cited by the Justice Department in seeking the search warrant for Mar-a-Lago would not hinge on the classification status of the documents.

National Archives officials spent much of 2021 trying to get back material from Mr. Trump, after learning that roughly two dozen boxes of presidential records material had been lingering in the White House residence for several months. Under the Presidential Records Act, all official material remains government property and has to be provided to the archives at the end of a president’s term.

Among the items they knew were missing were Mr. Trump’s original letters from the North Korean dictator Kim Jong-un, and the note that President Barack Obama had left Mr. Trump before he left office.

Two former White House officials, who had been designated as among Mr. Trump’s representatives with the archives, received calls and tried to facilitate the documents’ return.

Mr. Trump resisted those calls, describing the boxes of documents as “mine,” according to three advisers familiar with his comments.

Soon after beginning their investigation early this year, Justice Department officials came to believe there were additional classified documents that they needed to collect. In May, after conducting a series of witness interviews, the department issued a subpoena for the return of remaining classified material, according to people familiar with the episode.

On June 3, Jay Bratt, the chief of the counterespionage section of the national security division of the Justice Department, went to Mar-a-Lago to meet with two of Mr. Trump’s lawyers, Evan Corcoran and Christina Bobb, and retrieve any remaining classified material to satisfy the subpoena. Mr. Corcoran went through the boxes himself to identify classified material beforehand, according to two people familiar with his efforts.

Mr. Corcoran showed Mr. Bratt the basement storage room where, he said, the remaining material had been kept.

Mr. Trump briefly came to see the investigators during the visit.

Mr. Bratt and the agents who joined him were given a sheaf of classified material, according to two people familiar with the meeting. Mr. Corcoran then drafted a statement, which Ms. Bobb, who is said to be the custodian of the documents, signed. It asserted that, to the best of her knowledge, all classified material that was there had been returned, according to two people familiar with the statement.

Soon after that visit, investigators, who were interviewing several people in Mr. Trump’s circle about the documents, came to believe that there were other presidential records that had not been turned over, according to the people familiar with the matter.

On June 22, the Justice Department subpoenaed the Trump Organization for Mar-a-Lago’s security footage, which included a well-trafficked hallway outside the storage area, the people said.

The club had surveillance footage going back 60 days for some areas of the property, stretching back to late April of this year.

While much of the footage showed hours of club employees walking through the busy corridor, some of it raised concerns for investigators, according to people familiar with the matter. It revealed people moving boxes in and out, and in some cases, appearing to change the containers some documents were held in. The footage also showed other parts of the property.

In seeking a second round of security footage, the Justice Department want to review tapes for the weeks leading up to the Aug. 8 search.

Federal officials have indicated that their initial goal has been to secure any classified documents Mr. Trump was holding at Mar-a-Lago, a pay-for-membership club where there is little control over who comes in as guests. It remains to be seen whether anyone will face criminal charges stemming from the investigation.

The combination of witness interviews and the initial security footage led Justice Department officials to begin drafting a request for a search warrant, the people familiar with the matter said.

The F.B.I. agents who conducted the search found the additional documents in the storage area in the basement of Mar-a-Lago, as well as in a container in a closet in Mr. Trump’s office, the people said.

Mr. Trump’s allies have attacked the law enforcement agencies, accusing the investigators of being partisan.

The intense public interest has now spurred a legal fight to see the search warrant’s underlying affidavit. On Monday, a federal magistrate issued a formal order directing the Justice Department to send him under seal proposed redactions to the affidavit underlying the warrant used to search Mar-a-Lago by Thursday, accompanied by a memo explaining its justifications.

In the order, the judge, Bruce E. Reinhart, said he was inclined to release portions of the sealed affidavit but wanted to wait until he saw the government’s redactions before making a decision.