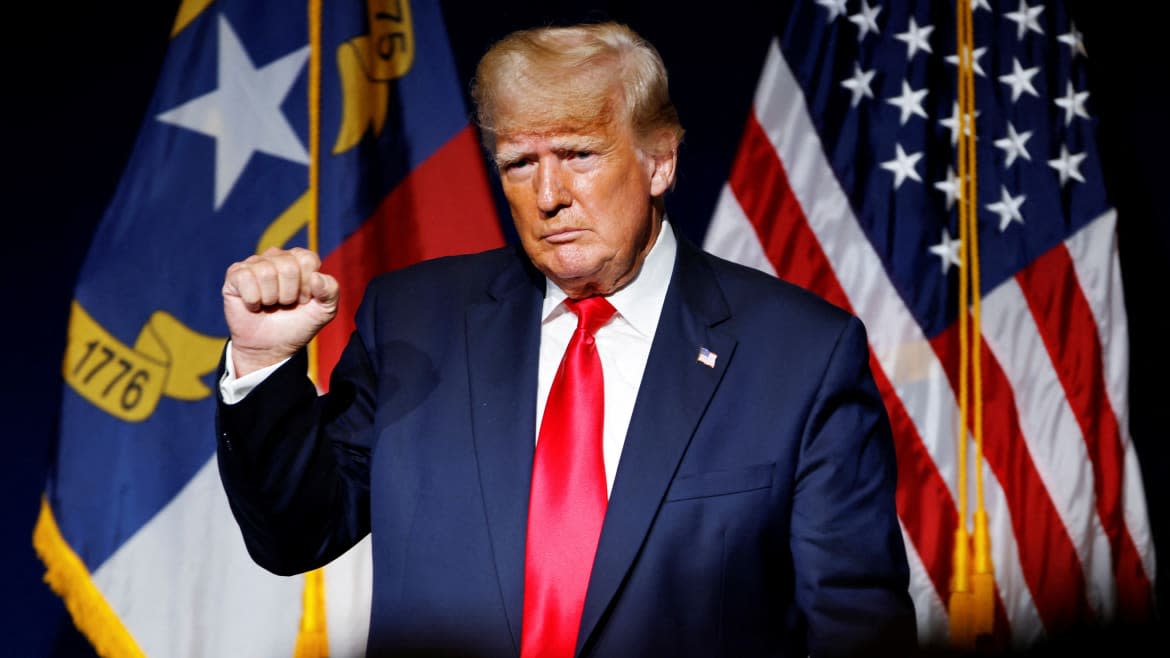 The Department of Justice revealed Tuesday night that it only started criminally investigating former President Donald Trump after he lied about keeping “top secret” documents at his oceanside Florida mansion—including three highly classified records inside his personal desk—and had some presidential papers moved around and torn up.

Had Trump simply turned them over to the National Archives when the agency asked for them back last year, the FBI might never have gotten access to them, the DOJ explained.

The DOJ came out swinging against Trump in a scathing court filing to block him from getting his stuff back from the Mar-a-Lago search by stating flatly that “those records do not belong to him.”

In the 36-page document, the DOJ argued that Trump lacks any ability to even ask for a federal judge to step in and oversee the seizure of sensitive documents that were kept unsecured at Trump’s oceanfront mansion in South Florida.

The DOJ also revealed why Trump is being investigated for violating a federal law that prohibits destroying government records, cited as 18 U.S. Code § 2071. Federal prosecutors claim that recovered documents showed that “certain pages of presidential records had been torn up,” a crime that pivotally bars anyone from ever again holding a political office in the United States.

Federal prosecutors disclosed that Trump was under investigation for yet another crime, obstruction of justice, cited as 18 U.S.C. § 1519, because the feds “developed evidence that government records were likely concealed and removed from the [Mar-a-Lago] storage room and that efforts were likely taken to obstruct the government’s investigation.” For example, FBI special agents who conducted the search three weeks ago claim they found three classified documents in desks at the so-called “45 Office” in another section of the mansion—alongside two of his expired passports—despite the fact that Trump and his lawyers had sworn they wouldn’t be there.

Trump, represented by a team of defense attorneys who have been criticized for their ineptitude, waited a whopping two weeks after the FBI raid at his Palm Beach estate to sue and ask for a judge to appoint a “special master” to oversee federal agents’ handling of the records they seized. On Tuesday night, the DOJ responded by arguing that the Presidential Records Act “makes clear” that the government “has complete ownership, possession, and control” of those documents and the former president can’t just ask for them back—or dictate how they should be handled.

Trump is currently under investigation by the FBI for putting the nation’s security at risk by mishandling “top secret” government records. For more than a year, his office had been in negotiations with the National Archives over the way he took more than a dozen boxes of presidential records from the White House to his private estate instead of turning them over to the nation’s archivists for proper preservation. In recent days, the looming threat of an unprecedented prosecution of a former president has prompted his allies—even prominent Republicans like Sen. Lindsey Graham—to threaten nationwide violence and even civil war.

The scathing arguments laid out in the court filing—signed by top Miami federal prosecutor Juan Antonio Gonzalez and Jay I. Bratt, chief of the DOJ National Security Division’s counterintelligence and export control section—take the most aggressive tone by the DOJ yet against the former president. From the get-go, it counters the disinformation and politicizing that Trump has engaged in through public statements on social media that also bled into his lawsuit, with the DOJ saying that it would provide “a detailed recitation of the relevant facts, many of which are provided to correct the incomplete and inaccurate narrative.”

For example, Trump and his lieutenants—such as former White House aide Kash Patel—have argued that he had already declassified mountains of records, thus eliminating any accusation that such records were sensitive or improperly handled. On Tuesday, the DOJ revealed that Trump’s lawyers never even mentioned that any of the documents in the 15 boxes Trump turned over to the National Archives in January 2022 were declassified.

Trump Floats Yet Another Excuse: The Mar-a-Lago Docs Were Privileged!

The DOJ also acknowledged that it has indeed had a federal grand jury in the District of Columbia investigate the former president, noting that Chief Judge Beryl A. Howell there authorized federal prosecutors on Monday to disclose it following Trump’s statements about having received subpoenas for video footage at Mar-a-Lago.

Federal prosecutors also shed more light on what they say happened on June 3, when Bratt himself traveled south to Mar-a-Lago to figure out what exactly was going on. According to the DOJ’s court filing, Trump’s lawyers assured the feds that no classified documents remained at the mansion, which doubles as a luxurious club with international clientele that at times has included unscrupulous types suspected of spying for foreign governments.

But when the feds tried verifying whether that was true, they were rebuffed, according to the DOJ. At one point, an attorney for Trump “explicitly prohibited government personnel from opening or looking inside any of the boxes that remained in the storage room, giving no opportunity for the government to confirm that no documents with classification markings remained.”

“Counsel for the former president offered no explanation as to why boxes of government records, including 38 documents with classification markings, remained at the premises nearly five months after the production of the fifteen boxes and nearly one-and-a-half years after the end of the [Trump] administration,” the DOJ wrote on Tuesday.

However, despite the supposed assurances Trump’s team made that all classified material had been turned over that day, the FBI earlier this month found more than 100 others were still at Mar-a-Lago.

Federal prosecutors also addressed what’s become a frequent talking point on Fox News and other right-wing media: how allegedly unfair it was for the feds to take Trump’s personal belongings and not return them. For weeks, Trump’s associates have been railing against the FBI for taking boxes containing his wife’s clothes and his passports. But the DOJ on Tuesday forcefully explained why it’s so reluctant to give any of that back: The piles of stuff is actually proof of how irresponsible the former president stored some of the nation’s most closely guarded spy material.

“Evidence of commingling personal effects with documents bearing classification markings is relevant evidence of the statutory offenses under investigation,” the DOJ explained in court documents.

In fact, some of those national defense secrets were so sensitive that the feds collecting them weren’t even authorized to see them.

“In some instances, even the FBI counterintelligence personnel and DOJ attorneys conducting the review required additional clearances before they were permitted to review certain documents,” the DOJ explained.