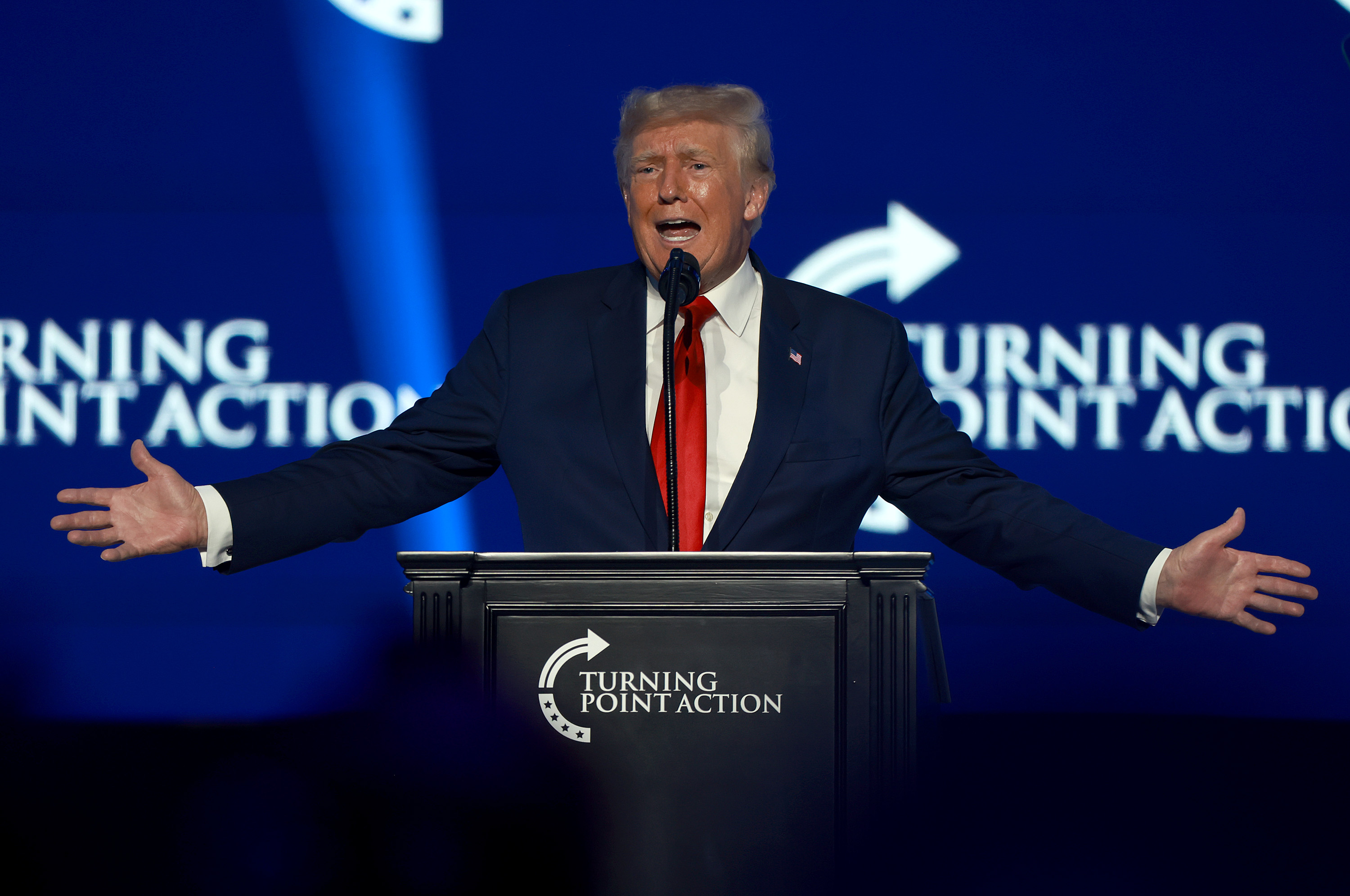 “If I announced I was not going to run for office, the persecution of Donald Trump would immediately stop,” Trump said at the Turning Point USA Student Action Summit. “But that’s what they want me to do. And you know what? There’s no chance I do that.”

Several recent polls have shown Republican voters moving away from Trump and inching toward DeSantis. The Florida governor, who has repeatedly said he is focusing on his 2022 re-election bid, is also beating Trump at fundraising.

In Hollywood, Fla., on the state’s Atlantic Coast, the Republican Party of Florida held its annual Sunshine Summit, a two-day event largely funded by money DeSantis raised for the Florida GOP. State Republicans including DeSantis gathered at the Seminole Hard Rock, where some of the state’s most prominent Republican officials held formal party business just yards away from bikini-clad hotel guests and gamblers playing slot machines.

More than 250 miles away, in Tampa, the conservative student organization Turning Point USA also held a summit that featured speeches from Rep. Marjorie Taylor Greene (R-Ga.), Fox News host Laura Ingraham and Trump, among others. The former president’s appearance came just a day after he held a rally in Prescott, Ariz., to support Kari Lake in her bid for governor there.

The audience for Trump’s event was mostly young people from all over the country, and cheered and clapped throughout his speech. He received his biggest applause when he hinted he would run for election though he didn’t provide any specifics.

“Everything this corrupt establishment is doing to me is all about preserving their control over the American people,” Trump said to the estimated 5,000 people in attendance. “They want to damage me in any form so I can no longer represent you. Obviously, they want me not to be the candidate because they never talk about anybody else.”

DeSantis delivered a speech to the same Tampa crowd on Friday.

The Florida Republicans event in Hollywood, Fla. was much smaller than the Turning Point conference and was influenced heavily by DeSantis.

For the first time in the event’s seven-year history, it limited which media could attend, giving inside-the-room access to right-wing outlets that give the governor positive coverage. Traditional party figures were also largely replaced by the conservative social media influencers with massive followings who have recently moved to Florida and become some of DeSantis’ most vocal backers, with conservative commentator Dave Rubin and Fox News personality Lisa Boothe among them.

“We in the state of Florida are not going to allow legacy media outlets to be involved in our primaries,” DeSantis said in remarks opening the Florida GOP event on Saturday. “I’m not going to have a bunch of left-wing media people asking our candidates gotcha questions.”

The possible clash between the two is one of the major tension points within national Republican circles, as DeSantis, who rode a Trump endorsement in 2018 to win his party’s nomination for Florida Republican governor, has seen his popularity skyrocket, as was evidenced by his fans at the state Republican event.

“I love President Trump, but he is the boogeyman that Democrats use to run against. Without him they have nothing. No platform,” said James Lefebvre, an attendee at the Sunshine Summit, who was sitting at one of the Hard Rock’s restaurants asking passersby if they support DeSantis for president.

“I like an asshole as president, I really do, so it has nothing to do with that,” he added. “I just think DeSantis can unify people a bit more, and without him the Democrats have nothing.”

He said fights DeSantis’ picks at the state level have resonated with him and conservatives nationally, most notably pushing Florida’s Republican-led Legislature to strip Disney of its self-governing status after it expressed opposition to DeSantis-championed legislation banning lessons about gender identity and sexual orientation in classrooms up to third grade. Opponents branded the bill “Don’t Say Gay.”

Trump’s presence over a state he won by more than three-points in 2020, however, is not gone. Even those who said they support DeSantis running in 2024 wouldn’t bash the former president. Despite near-daily negative press over the Jan. 6 riots at the Capitol that left at least five people dead, Republicans still seem unwilling to let go of Trump.

Diana Jimenez, a 25-year-old New Jersey resident who attended the Tampa Turning Points USA event, said she was impressed with DeSantis but wasn’t ready to support him for president.

“I was really close to him, I got to talk to him personally,” she said. “I don’t think he should go to D.C., he should just stay down here”

She said instead that Trump should run for president.