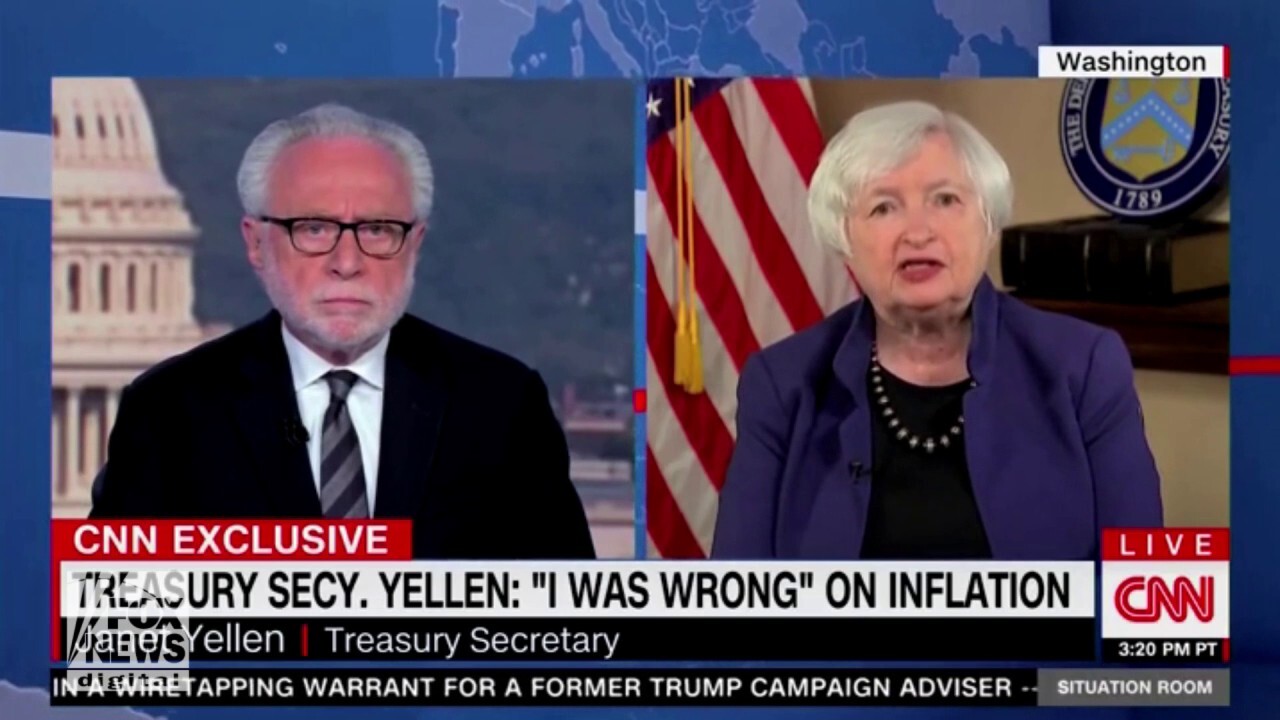 Secretary of the Treasury Janet Yellen irked plenty of people with her admission Tuesday that she was “wrong” on inflation being transitory. The resounding message from critics on Twitter was for Yellen to “resign.”

Appearing on CNN with anchor Wolf Blitzer, Yellen admitted that she had not anticipated just how intense and prolonged America’s inflation suffering would be.

RECESSION IS LOOMING, IF IT HASN’T STARTED ALREADY: JACKIE DEANGELIS ON ‘FOX & FRIENDS’

FILE – In this May 7, 2021, file photo Treasury Secretary Janet Yellen speaks during a news briefing at the White House in Washington.
(AP Photo/Patrick Semansky, File)

Tuesday’s Blitzer appearance marked a complete U-turn on that rhetoric. Yellen told the anchor, “I think I was wrong then about the path that inflation would take.”

She provided excuses, adding, “As I mentioned there have been unanticipated and large shocks to the economy that have boosted energy and food prices and um, supply bottlenecks that have affected our economy badly, that I didn’t, at the time, understand.”

A Treasury Department spokesperson told FOX News, “The Secretary was pointing out that there have been shocks to the economy that have exacerbated inflationary pressures which couldn’t have been foreseen 18 months ago, including Russia’s decision to invade Ukraine, multiple successive variants of COVID, and lockdowns in China. As she also noted, there has been historic growth and record job creation and our goal is now to transition to steady and stable growth as inflation is brought down.”

Treasury Secretary Janet Yellen admits she did not foresee prices being this high for this long. REUTERS/Mike Blake/File Photo

Conservatives critics argued the admission from Treasury Secretary Yellen showed that she and the department were not up to the task of easing the country’s economic woes.

Judicial Watch president Tom Fitton slammed Yellen, amazed that she’s still employed. “Trillions of lost wealth and opportunity, and yet she keeps her job,” he tweeted.

Former Trump campaign advisor Steve Cortes called Yellen’s words “Bulls—t,” and demanded her to resign. He tweeted, “Former Fed Chair, current Treasury Sec: ‘oopsies, I missed the biggest Inflation explosion in over a generation.’ Bulls–t. She surely knew, and chose the narrative of ‘transitory’ over economic reality. If she actually didn’t know, even worse. A real professional would resign.”

“’I suck at my job… but I’m going to stay here to keep sucking at it,’” mocked Washington Times columnist Tim Young.

The BlazeTV host Steve Deace opted for a more conciliatory tone, tweeting, “Wow, someone actually admitted error for a change. That’s good, but now show us it’s sincere by turning course from the policies that caused this.”

Townhall.com editor Derek Hunter asked, “How can the American people trust a President surrounded by advisors who got everything so wrong?” He added, “Basic things were just wrong, or the lied. It’s almost better if they lied, it would mean they’re not completely incompetent.”

“Lots of people anticipated ‘the path that inflation would take.’ The question is, why didn’t Yellen, and why didn’t the @federalreserve?” tweeted Forbes policy editor Avik Roy.

He later tweeted, “I have to give Janet Yellen credit for being the first member of the Biden administration to admit they were wrong about something.”