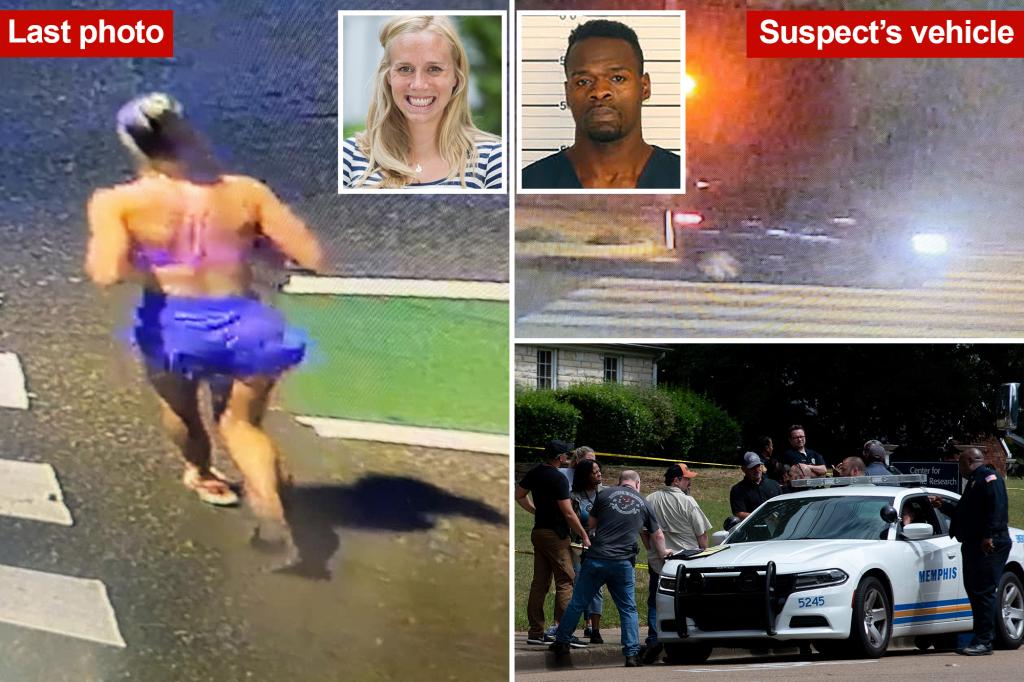 A huge search continued Monday for Tennessee heiress Eliza Fletcher — more than three days after she was caught on camera being violently snatched off the street during her regular early-morning run.

Multiple law enforcement agencies kept up the search across Memphis a day after a suspect, Cleotha Abston, 38, was charged with the especially aggravated kidnapping of the missing teacher.

Intrigue in the case rose after it emerged that the keen runner was the granddaughter of a late Memphis billionaire.

The suspect had also served 20 years for a previous kidnapping in which he forced an attorney to take out cash from ATMs at gunpoint — and was feared by female neighbors who called him “creepy” and a “pervert.”

Here are the key events in the ongoing case.

Fletcher, a 34-year-old mom of two, leaves her home for her regular jog.

The kindergarten teacher, who previously qualified for the elite Boston marathon, is seen in surveillance footage running in a pink sports bra and purple running shorts. She sticks to her usual route along Central Avenue near the University of Memphis, the school’s police force said.

At a similar time as Fletcher starts her run, a black GMC Terrain is caught on surveillance cameras prowling the university area where she would soon be snatched, according to an affidavit notes.

About 20 minutes into Fletcher’s run — and 24 minutes after the GMC was first spotted in the area — the SUV is seen pulling up ahead of the jogger and waiting for her to pass, the affidavit says.

A man got out, runs “aggressively toward” Fletcher and then forces her into the passenger seat. “During this struggle, there appeared to be a struggle,” the affidavit said — with the SUV remaining there for four minutes before driving off.

This crucial footage will only emerge hours after the terrifying abduction.

Before the alarm has been raised, a local bike rider named Miles Fortas finds Fletcher’s cellphone and — completely unaware as to what had happened — heads over to deliver it to her family.

Crucially, he also finds a pair of Champion slides — which DNA testing is able to quickly prove belonged to Cleotha Abston, 38, the man later charged with the especially aggravated kidnapping of Fletcher.

Abston, who previously served 20 years in prison for a previous kidnapping, quickly becomes the prime suspect.

Soon after the cyclist found the phone and slides, Fletcher’s husband, Richard Fletcher, alerts police for the first time that his wife, who also used the first name Liza, had not returned from her regular run.

Abston is seen going to the Memphis home of his brother — who was later charged with unconnected drug offenses. She later reported seeing the suspect “cleaning the interior of the GMC Terrain with floor cleaner and stated that he was behaving oddly.”

“This was later confirmed by” Abston’s brother, Mario, 38, who also stated that he saw his brother cleaning the car floor. Both also saw him “washing his clothes in the sink of the house” and “acting very strange,” the affidavit said.

Fletcher’s family releases a video statement asking for help in finding Fletcher and offered a $50,000 reward for information in the case, with her husband constantly wiping away tears.

Intrigue in the case grows after it emerges that the snatched runner is the granddaughter of the late hardware-company billionaire Joseph Orgill III.

Early the next day, US Marshals find a black GMC parked near Abston’s home and quickly confirm it’s the one seen in the harrowing abduction footage.

The same Marshals’ task force officers spot Abston standing in a doorway of his apartment complex. “He attempted to flee but was taken into custody,” the arrest affidavit said.

Abston “declined to provide investigators with the location of the victim,” the affidavit notes.

Early Sunday — almost exactly two days after Fletcher was snatched — police announce that Abston “has been officially charged in connection with the abduction of Eliza Fletcher.”

He is currently being held on a $500,000 bond on charges of tampering with evidence and especially aggravated kidnapping. An arraignment is set for Tuesday.

Court records later show that he had only got out of prison in 2020 after serving 20 years for a previous conviction of especially aggravated kidnapping. He had only been 16 when he forced an attorney to get into his car trunk, making him take out cash at ATMs at gunpoint.

Even before then, he had faced numerous charges as a juvenile, including an accusation of rape, according to court documents obtained by the Memphis Commercial Appeal.

His brother, Mario, was also charged Sunday, with possession with intent to manufacture and sell both fentanyl and heroin, as well as possession of a firearm during the commission of a dangerous felony. He is “currently not believed to be connected to Fletcher’s abduction,” police stressed.

The huge search enters its fourth day, with officers seen taking away a huge trash canister near where Abston was seen and searching wooded areas near where the jogger was snatched.

As of early Monday afternoon, however, police had yet to report any breakthroughs in finding the abducted mom.

It was unlikely that the mom escaped unscathed, officials warned.

“As the abduction was violent with, as captured on video, the suspect waiting for, then rushing towards the victim, then forcing the victim into the car, where she was confined and removed and continues to be missing, it is believed and supported by the facts and physical evidence that she suffered serious injury,” the arrest affidavit said.