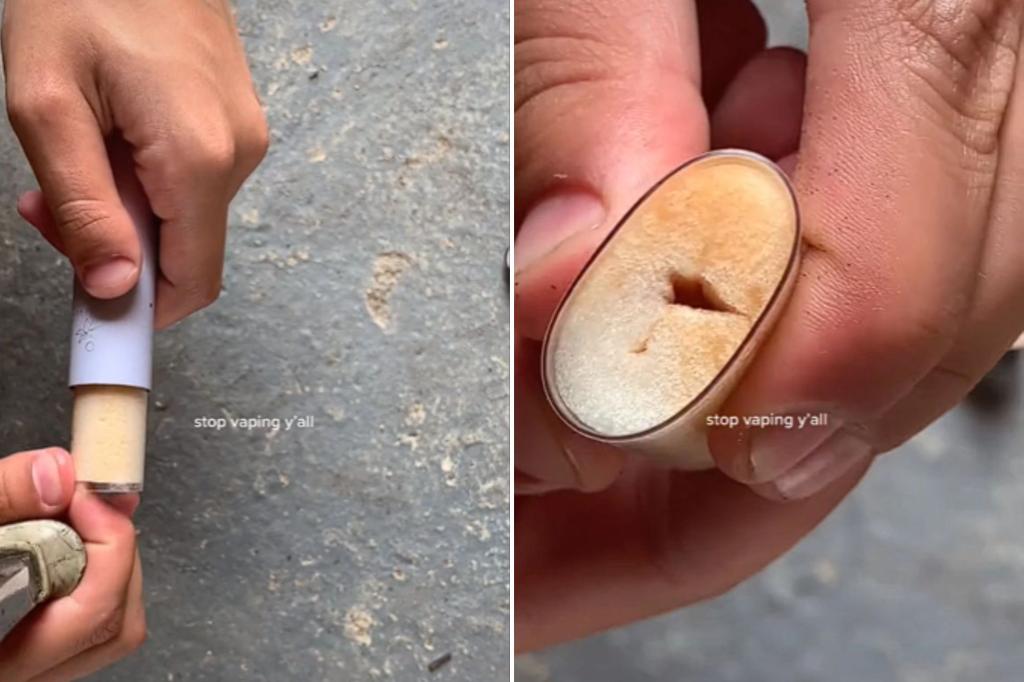 The disgusting innards of a popular vape has been exposed in an eye-opening video that shows the foul reality of what smokers are really breathing in.

Footage shared to TikTok recently came with the warning, “stop vaping ya’ll”, and highlighted the unknown filth lurking inside the colorful devices.

As the TikTok creator dismantled the pink and white item, it quickly became clear its external appearance couldn’t have misrepresented the innards more.

Beneath there was a plastic stopper that concealed battery wires and had to be forcefully removed with pliers.

Each part was coated in unsightly splotches of chemical debris, which the video creator suspected was likely to end up in users’ lungs.

The video was fast to go viral and attract millions of views, while hundreds expressed their horror over what they saw in the comments.

“Why do people even consider it is my question,” someone else wrote.

“Everyone was so worried about straws but see no issue in disposable vapes,” a third wrote.

Others were unfazed by what they saw, probing the creator about what they expected to see.

“What did you expect, a flame under a strawberry?” one said.

Many found it concerning that so many people, despite being aware of the health risks, continued to enthusiastically share their love for vaping.

“The fact people are fine talking about vaping in the comments like it makes them hard and cool is embarrassing,” someone wrote.

Chief Executive at the Australian Council on Smoking and Health, Maurice Swanson, said vaping was threatening to undermine 40 years worth of work in reducing youth smoking.

“Those who get addicted to nicotine from vaping have got a three-fold increase in probability of going on to smoking regular cigarettes,” Mr. Swanson told news.com.au.

He added there had been many cases in the US where young people had been hospitalized with serious lung diseases as a result of their vaping.

In most cases the patients were found to have been adding cannabis oil to their devices, he said.

“They use their vaping devices to add cannabis oil to the mixture, so they get even more of a rush,” Mr. Swanson said.

“Some of them have ended up in hospital and they haven’t added cannabis oil at all.”