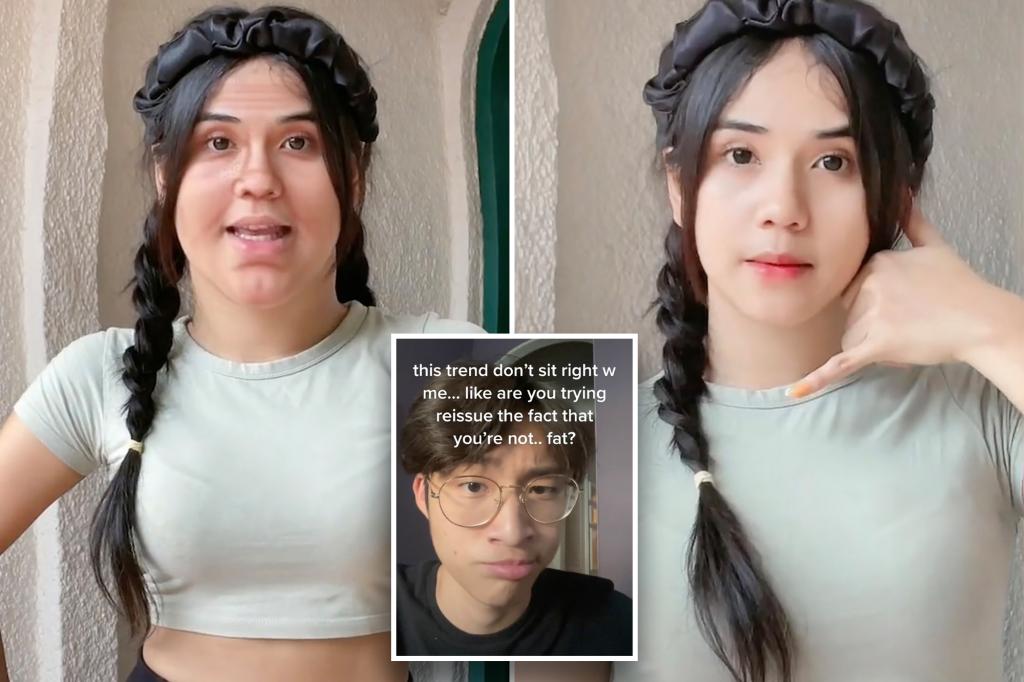 TikTokers slammed the popular video platform over a “fatphobic” filter, claiming the grotesque effect — which made people’s faces large and rugged — was offensive.

The trend, in which people used the filter to the tune of Rosalia’s song “1, 2, 3,” was first attempted by TikToker @eunicetjoaa. The clip garnered nearly 30 million views and marked the beginning of the filter fad.

Soon, hundreds of users flocked to the app to record their own renditions with the filter, which has since been deleted.

User @katiana.kay amassed over 6 million views with her version, in which she showed off her new pup, while others claimed the filter gave them a “confidence boost” after turning it off.

“Biggest confidence boost ever,” one user wrote on her video, which showed her using the face effect and received nearly 800,000 views.

“This filter gives you confidence,” another TikToker wrote on his clip using the filter and sound, amassing 1.8 million views.

But others weren’t too keen on the filter being used to attack people who shared similar features.

“Why do ppl keep making filters to make fun of fat people,” questioned one TikToker.

“YIKES to anyone doing this. Fatphobes,” one user, known as @splotchmaker, wrote on her video duetting @katiana.kay, receiving applause from some of her 2.3 million viewers.

“Why do people think these trends are cute to do? I’m so tired of it,” commented another.

“The video you duetted sends me with unbelievable rage,” said someone else.

But not everyone in the comments section was kind — some turned on the body-positive TikToker, slamming her appearance and saying she didn’t “have an excuse for not being in good form.”

TikTok’s latest body shaming offense isn’t the platform’s first. In fact, the app is known for being extra vigilant about censoring videos.

In 2020, curvier influencers on the app slammed TikTok for flagging and removing their videos for somehow violating community guidelines while showing just as much skin as their thinner counterparts. They suspected the algorithm wasn’t punishing them for a little bit of skin, rather, it was being egregiously fatphobic.

In documents obtained by The Intercept that same year, reporters revealed a TikTok policy for hiding content showing people with “abnormal body shape, chubby, have obvious beer belly, obese or too thin.”

A TikTok spokesperson addressed the report, saying “most of” the guidelines in The Intercept’s report “are either no longer in use, or in some cases appear to never have been in place.”