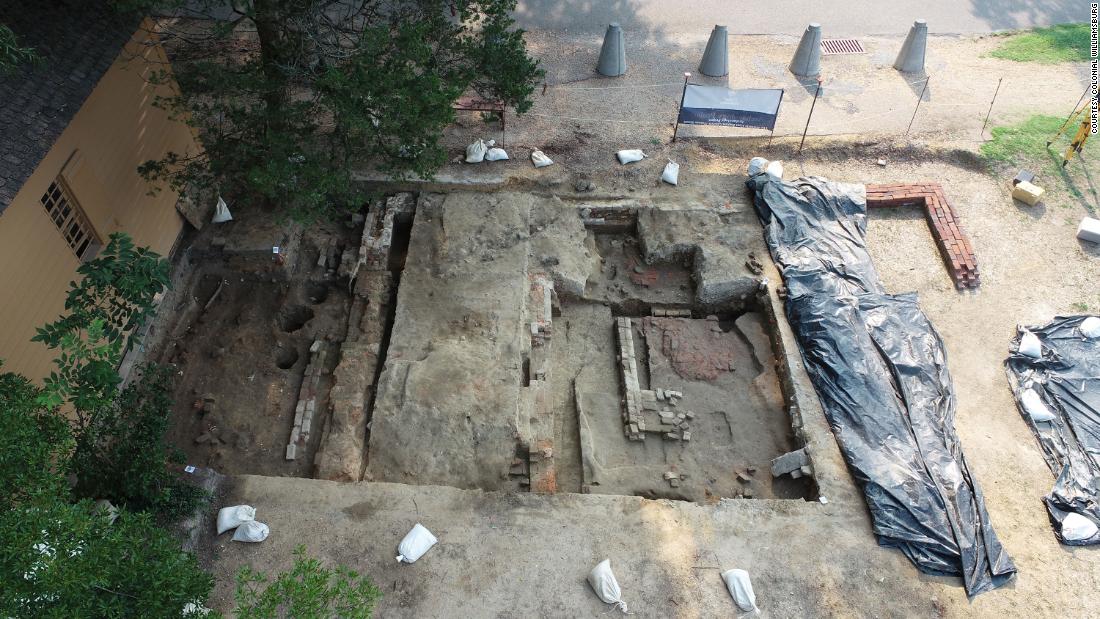 Last month, the archaeology team fully excavated the first burial of an individual in a wooden coffin and extracted bone for a DNA sample to be analyzed alongside analysis of the skeletal remains. The archaeology team is now working to prepare the second grave for excavation.

For the Black descendants of residents in Williamsburg, this effort is long overdue. Throughout the 18th and 19th centuries, Black residents made up more than half the town’s population and members of the church included abolitionists, teachers and farmers.

Since 1956, the church’s foundation has been covered by a parking lot owned by Colonial Williamsburg after the museum bought and demolished the structure.

And it was largely forgotten. Throughout the years, visitors to Colonial Williamsburg parked their cars and walked over the foundation. Children would exit school buses on field trips to the 301 acre site dedicated to preserving the history of the Virginia town as it existed in the 18th century to “feed the human spirit by sharing America’s enduring story.”

But that history was not inclusive, historians and residents said.

The experiences of Black community members in the colonial era have often been left out, said Connie Harshaw, the president of the Let Freedom Ring Foundation, dedicated to preserving the church’s history. First Baptist Church being buried all these years is a testament to this erasure of history, she said.

“It was an asphalt parking lot for more than 60 years with no regard to the people who lived there and who died and were buried there, whose names we don’t even know,” Harshaw said.

The journey to uncover First Baptist Church’s history began in 2020 with a partnership between Colonial Williamsburg and the non-profit foundation. Talks began in the spring of 2020, and digging began in the summer of 2020, Harshaw said.

‘A lot of reckoning to do’

The 75-year-old Williamsburg native and member of the church’s descendant community said knowing the church’s foundation was covered by a parking lot was painful. Her mother, a seamstress, would knit her only the best attire to wear to First Baptist Church, with outfits including corduroy jumpers and ruffle-collared blouses to wear with patent leather shoes.

“I felt devalued and dismissed and just unappreciated as a human being,” Conyers said. “Colonial Williamsburg has a lot of reckoning to do.”

“We’ve ripped up that parking lot and it will never go back,” Gary said.

First Baptist Church was founded in 1776 by free and enslaved Black people in Williamsburg, Virginia’s colonial capital. Members secretly gathered under trees at a plantation to engage in song and prayer, defying state laws that prohibited Black people from congregating in large groups.

By 1818 there was a building on the lot, referred to on a tax document as the Baptist Meeting House.

The original structure of First Baptist Church was destroyed by a tornado in 1834. Over two decades later, in 1856, a new brick church on the site of the first building was constructed and remained there until 1956, when Colonial Williamsburg bought and demolished the church as part of an expansion project, placing a parking lot over the historic location. Payment for the property was used to construct the congregation’s current church that sits about a mile away from the original site.

Today, the church remains active and is on the US National Register of Historic Places. Harshaw said people travel from all over to visit the church, with visitors coming as far as Beirut and Kenya.

“It’s no longer simply a community church. It’s a national treasure and everybody’s coming to see it,” Harshaw said.

From demolition to dedication

After having conversations with the president about telling a more complete story about Williamsburg history that centered on the Black experience and the church’s cultural and historical significance, Harshaw said the excavation project commenced soon after when the parking lot was ripped up in August 2020.

Last year, following about a year of excavating the site, archaeologists discovered the church’s original permanent structure, a 16- by 20-foot brick foundation atop a layer of soil that dates back to the early 1800s, according to the museum. Archaeologists also identified multiple gravesites.

Although Harshaw said she had no idea there were intact burials on the site, she said some other members of the descendant community were ultimately not surprised when the plots were discovered last year. Older members of the church long spoke about their ancestors being buried at the church based on oral histories passed down generations.

Johnette Weaver, a Williamsburg native and member of the church’s descendent community, said she recalls hearing stories from a church elder about their great grandfather being buried at the original church site.

“For Black people, a lot of our history is oral,” Weaver said. “It doesn’t mean that it’s untrue, it just means it wasn’t written anywhere or inscribed anywhere.”

To date, the Colonial Williamsburg archaeology team has identified a total of 41 burial shafts. Of these burials, only one is marked, by an upside down wine bottle at the foot of the grave. Gary speculates that this grave may have belonged to a church leader or someone of prominence in Williamsburg’s colonial community.

This marked grave will be the last of the three graves to be excavated and analyzed as part of the project.

Anthony Pinn, a humanities professor at Rice University, said the discovery of the burials is significant given that under White supremacy in the Antebellum South, Black people were exploited and reduced to their physical bodies’ ability to provide labor. White supremacy also worked to deny Black people family connections and social ties under slavery, Pinn added.

“Burial within the context of the Black church was not simply a recognition of death, but it was a recognition of life, that this person was substantive, had impact on the world, and that they had to be recognized and celebrated for who they were in a much fuller sense,” Pinn said.

Gary said accurately telling the story of one of the nation’s oldest Black churches is at the heart of the project. Following the excavation of each burial, he said the next step is to conduct both DNA and osteological analysis on the skeletal remains to gain more insight into who was buried at the church.

The DNA analysis, to be conducted by the University of Connecticut, is anticipated to uncover information about the three individuals’ skin tone, eye color and even their propensity for certain diseases. The analysis of the bones, to be performed at the College of William & Mary’s Institute for Historical Biology, is expected to show how old these individuals were when they died as well as their place of origin, sex, quality of life and more.

Members of the church’s descendant community eventually hope to submit their DNA to assess biological kinship to those buried at the church. At the conclusion of the project, the remains will be reinterred.

Gary said he expects this phase of the excavation project to take about a year, between the actual act of excavating the graves as well as analyzing and reinterring them. He said Colonial Williamsburg also hopes to reconstruct the church with historically accurate dimensions and furnishings to replicate how the church looked in the colonial era by 2026, the 250th anniversary of the church.

“We’re going to put it back exactly where it was,” Gary said. “It’ll be sitting in its exact footprint, as it was the day the congregation built it in the early 1800s.”

Gary also said the input of the descendant community will be at the center of how Colonial Williamsburg proceeds with the project, including how to commemorate the site on a long-term basis and how they would like to see the remains reinterred.

Harshaw said she hopes the project signals the importance of telling complete and accurate histories that reflect a diverse set of experiences.

“We are really hoping that we will be an example for the nation,” Harshaw said. “If we can do it in the Commonwealth of Virginia, where you can drive up down I-95 on any given day and see Confederate flags, we are hoping that the rest of the nation will look to see what we’re doing and say ‘you know what, we probably need to do something about the fact that this place looked very different, or there’s a very different and more important and significant story,’ because the bottom line is this: We have a shared history.”