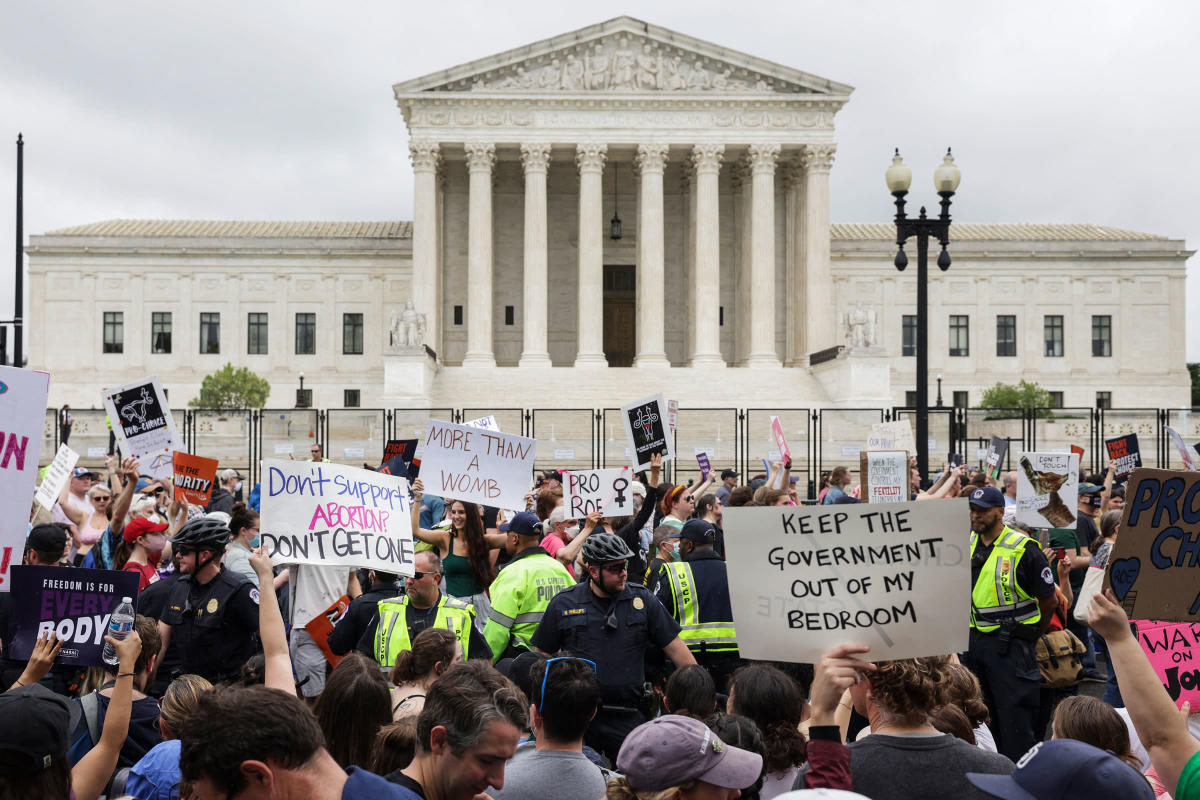 Abortion rights activists participate in a Bans Off Our Bodies rally at the U.S. Supreme Court on May 14, 2022 in Washington, DC. Credit – Kevin Dietsch—Getty Images

It has been more than three weeks since the bombshell leak of a draft opinion in Dobbs v. Jackson Women’s Health Organization—the pending Supreme Court case that could end abortion rights in America as we know them. Justice Samuel Alito’s draft pronounces Roe v. Wade, the 1973 decision recognizing a constitutional right to terminate a pregnancy, “egregiously wrong from the start.”

Laced with contempt for a right that has stood for 49 years, the Dobbs draft overrules Roe along with the 1992 follow-on decision Planned Parenthood v. Casey. The weaknesses of the draft are many: a shockingly narrow view of constitutional rights; an insistence that killing “an unborn human being” poses a “critical moral question” with no acknowledgement that commandeering wombs might raise an ethical quandary, too; reasoning that, despite dubious disclaimers, puts other rights—including contraception, sexual intimacy, and marriage equality—at risk.

But another glaring weakness in the draft has received less attention: its specious assertion that Roe hasn’t really impacted Americans’ lives, so there’s no good reason for the court to stand by it. The jarring ways in which individuals’ lives and relationships will be disrupted if this half-century-old precedent falls—a factor the Justices call “reliance interests”—came up repeatedly in the December 1 oral argument, with Solicitor General Elizabeth Prelogar arguing that scrapping the right to abortion would upend “societal reliance and what this right has meant for further ensuring equality.” But it barely makes an appearance in Alito’s draft.

When Americans come to rely on a decision of the Supreme Court, the Justices have historically exercised special caution about abandoning it. As Justice Antonin Scalia once explained, “The doctrine of stare decisis protects the legitimate expectations of those who live under the law.” The idea that reliance considerations are central to stare decisis and indeed to the rule of law has a long pedigree. In 1815, the court explained that a prior ruling “should always be adhered to” when overruling it would upend contractual arrangements. In 2019, Justice Alito himself wrote a majority opinion sticking by a longstanding “chain of precedent linking dozens of cases over 170 years” in a case about the double jeopardy clause of the Fifth Amendment. But when it comes to erasing abortion rights, Alito’s draft breezily asserts that Roe has created no “concrete” reliance interests for Americans. And away it goes.

Alito’s reliance analysis—which occupies a scant two pages of his 98-page opinion—starts with a sleight of hand and ends with hand-waving. He begins by asserting that Casey “conceded” that “traditional reliance interests were not implicated” in a potential withdrawal of abortion rights. But that is a gross mischaracterization of Casey. The argument Alito tries to attribute to the Justices who upheld Roe was not, in fact, a concession at all. It was a counterargument the court “imagine[d]” a critic might raise and that “may appear” to undercut a reliance claim when it actually does nothing of the sort. Here’s the (flawed) idea: new abortion bans may not upend expectations, “the argument might run,” because individuals and couples can simply adjust their expectations and reproductive planning accordingly.

Read More: If Roe v. Wade Is Overturned, Our Clinic Will Stop Providing Abortions Immediately. But We Won’t Shut Down

The Justices described that argument in Casey precisely in order to reject it. Their point was that the court should honor not only reliance on the terms of commercial contracts, but also in the context of a social contract around which “people have organized intimate relationships and made choices that define their views of themselves and their places in society.” In the decades since Roe, millions have come to rely, the Casey court wrote, on “the availability of abortion in the event that contraception should fail.”

Alito tries to get around this common-sense account of abortion-rights reliance–at the very least as a backstop in the event of contraceptive failure–by calling it “intangible” and quoting Chief Justice William Rehnquist’s Casey dissent. The court is not equipped, Rehnquist wrote there, to weigh “generalized assertions about the national psyche.”

Read More: I Had an Unplanned Pregnancy, and a Choice

A thought experiment illustrates why Roe’s reliance interests are far from “intangible.” Imagine you and your partner bought a home last year and settled down in Tulsa, Okla. One expectation you had going in, so engrained that you may not have even given it a thought, is that an unexpected pregnancy or a failure of birth control would not obligate you to bear a child. Then on May 25, Oklahoma’s governor signs the most draconian abortion law in the nation: a privately enforced ban from the moment of fertilization. If in the weeks to come, when Dobbs officially drops, the Supreme Court blesses that prohibition (along with all others nationwide) as perfectly consistent with the constitution, all assurances of reproductive autonomy in your chosen home would vanish.

Or consider a high-school senior who, on May 1, sent in a deposit to attend a liberal-arts college in Ohio and discovered on May 2, the evening of the Dobbs leak, that she may have no reproductive rights in the state where she will be studying for four years. (Ohio has passed blatantly unconstitutional abortion prohibitions before only to have them blocked as violative of Roe. On May 23, in anticipation of Roe’s demise, Republican legislators introduced a privately enforced near-total ban similar to those in Texas and Oklahoma.) It dawns on the student that she could be one broken condom or sexual assault away from being forced into motherhood before completing college or beginning her career. These concerns are anything but abstract. If the Dobbs majority holds, concrete understandings of personal autonomy that have prevailed since before nearly all Americans of childbearing age were born will be shattered overnight.

What does Justice Alito say about concerns like these? He points to passages in briefs on each side and observes the “passionate” and divergent views on “the effects of the abortion right on the lives of women.” Justices, he says, have “neither the authority nor the expertise to adjudicate” these disputes. That’s up to state legislatures.

But peruse the briefs and here’s what you will find: From those opposed to abortion, doubt that abortion rights had anything to do with advances in gender equality over recent decades because there are many other contributing factors; from supporters of abortion rights, ample research allaying those doubts. A brief from dozens of prize-winning economists finds that every year 6% of American women ages 15 to 34 “are likely to experience an unintended pregnancy,” and makes clear that access to legal abortion has had a significant and positive impact on “women’s education, labor force participation, occupations, and earnings.”

An individual constitutional right has never been pulled out from under Americans’ feet before. If Dobbs goes the way Alito’s draft is pointing, the fallout will be significant and wide. Among the wreckage will be the Supreme Court’s longstanding principle that precedents on which millions of Americans rely should not be casually tossed aside.