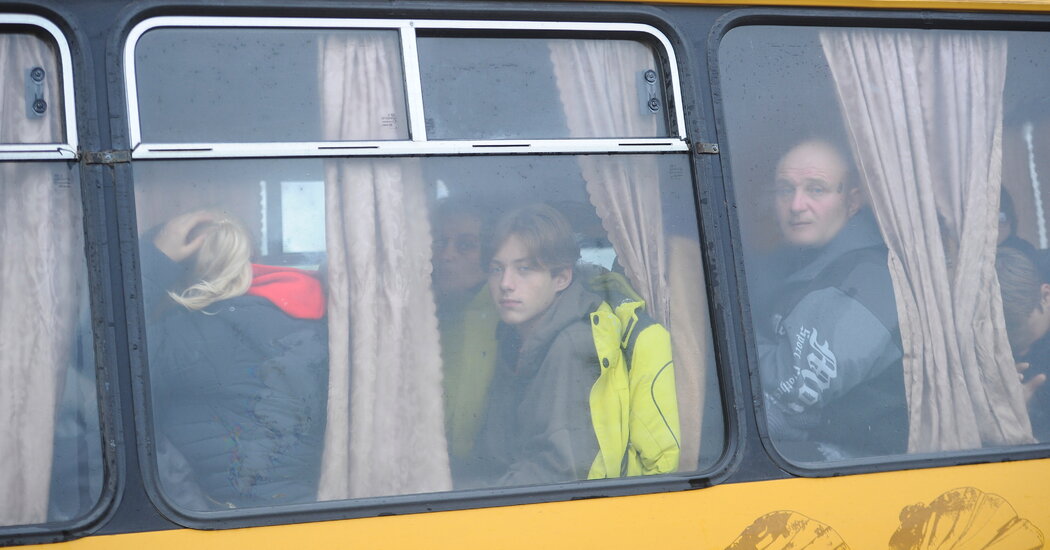 The Ukraine military’s recent advances are a potential turning point in the war. For Russians living close to the border, that is a source of increasing anxiety. For Russians farther away, the war is barely a part of daily life. I spoke to my colleague Valerie Hopkins, a Moscow correspondent who reported last week from a city near the border, about the contrast.

Claire: You just traveled to Belgorod, a Russian city of 400,000 about 25 miles from the Ukrainian border. It is now closer to the front lines after the Ukrainians recaptured land, pushing the war east. What was the mood there?

Valerie: For the first time since early March, the Ukrainians are right on the border. People are nervous about having the enemy army so close by. You can hear the war. I went to a market and heard two explosions. A very scared older woman told a vendor there, “It feels like they’re already here.”

About 1,500 people, mostly refugees from Ukraine and Russian soldiers who fled the fighting, are sleeping in an improvised tent community that the municipality set up. Volunteers estimate that thousands more people are housed in private apartments. A lot of Belgorod residents volunteer, trying to fill a need that, by and large, the government isn’t really meeting.

And while they aren’t disparaging the Russian army publicly, people are in shock. They used to believe in the strength of the Russian government and army. For the military to be routed so fast and lose so much territory, that has caused a lot of Russians to realize that it wasn’t as strong as they thought. That’s not to say that everyone in Belgorod has been an enthusiastic supporter of the war — some have their own questions about what’s happening and why.

As the war comes closer to Russia, what do residents fear now?

There’s a lot of uncertainty about what comes next. I spoke to someone who told me he can only plan ahead a few days at a time. He also said he had bought plywood to replace his windows in case of a bombing. People are packing bags, in case they have to leave if Ukrainian troops ever push into Russia.

Life in border cities is often about straddling the line — you reported that residents once regularly traveled about 50 miles from Belgorod to the city of Kharkiv, in Ukraine, to eat, party or shop. How has living in such close quarters affected the view of the war from Belgorod?

At least 11 million people in Russia have ties to Ukraine. Many people from Belgorod don’t see many differences between themselves and the people in Kharkiv, the city around which Ukraine has regained thousands of square miles. They quietly ask themselves: Who are we fighting?

In Moscow, though, you reported recently that day-to-day life far from the battlefield was continuing apace. What is the attitude among Russians there toward the war and its disruptions?

It’s kind of surreal to be here and to see people going on about their lives almost as if nothing has happened. Prices in Moscow have gone up, but people are living more or less as usual. Store shelves are full. I’m drinking Coca-Cola right now, despite the company officially leaving the Russian market.

People are still luxury shopping. While lots of high-end brands closed their shops here, department stores are open, and some are selling Chanel and Dior perfumes and cosmetics as normal. Restaurants are full. People are going to copycat versions of McDonald’s. I recently walked by a closed Starbucks, which is becoming something called a Stars Coffee. Russians know how to adapt. Some have started saying: “It’s time we start building these companies for ourselves.”

I’m also trying to think about what I don’t see. Tens of thousands of people have gone to other countries. For some it was an act of protest. Others were afraid of a conscription. Some journalists and activists left because of a crackdown on dissent — now if you write an antiwar post, it’s enough to send you to jail for years. Many of my friends and journalist colleagues left. I personally feel their absence.

Moscow has incredible culture and performers. A lot of people made Moscow a world-class capital because they had the freedom to make art, and now many of them are gone.

Our colleague Anton Troianovski reported that some politicians recently spoke out against the war, a remarkable moment given the Kremlin’s crackdown on dissent. How does criticism filter down to Russians?

Commentators on TV are talking about Russia’s big losses, and in some cases, the criticism by pundits on state TV can be biting, saying that Russia needs to invest more resources. Those are shifts, though they’re not coming out against the war itself. The commentary may change minds, but people aren’t going to change the way they vote. They won’t go out and protest.

But in Moscow, the worst atrocities of the war aren’t on the news. So you wonder: Do these people know and not care? Or have they chosen to shield themselves?

I try to talk to Russians about it. There was this flower festival in Moscow recently, where people were happily posing for selfies. They’re going about their lives as if nothing is going on, as if children aren’t being killed daily by bombs in a neighboring country. That duality is unsettling.

Valerie Hopkins is a correspondent for The Times, covering the countries of the former Soviet Union. Her first journalism job was covering war crimes trials in Bosnia and Herzegovina for the Balkan Investigative Reporting Network.

The bill undermines Republican claims that abortion is a state issue and risks helping Democrats in the midterms, says The Wall Street Journal’s editorial board. Rich Lowry counters in Politico that it gives Republicans a generally popular, middle-ground position to rally around.

Eat: The best miso soup of your life.

What to Watch For

What to Cook This Week