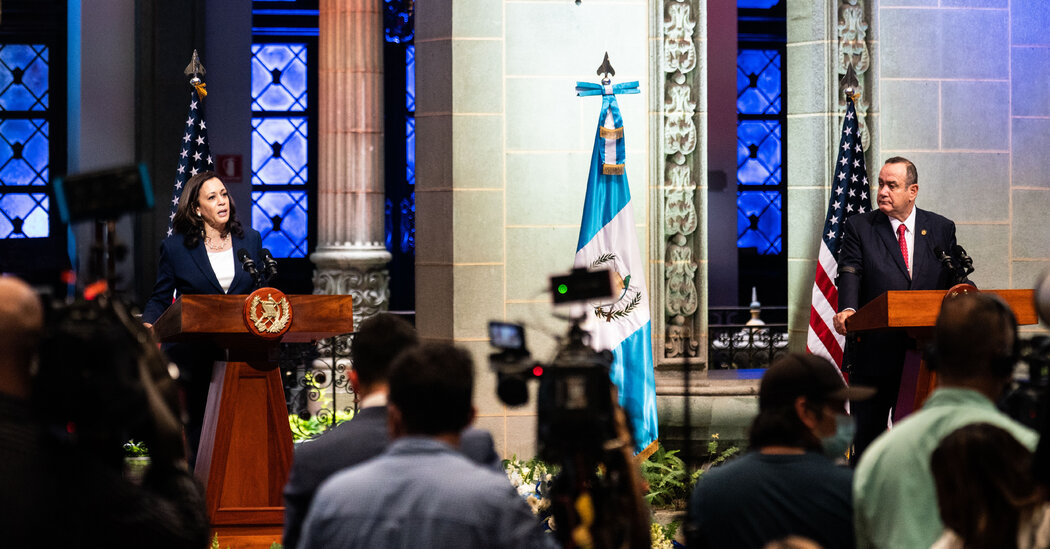 GUATEMALA CITY — Standing in Guatemala’s National Palace last June, Vice President Kamala Harris outlined a sharp break with President Donald J. Trump’s approach to undocumented migration. Instead of building walls and deporting minors, the United States would focus on reducing corruption and impunity in Central America, giving the hundreds of thousands of migrants who leave the region each year a reason to stay.

Supporters of the rule of law would be rewarded with billions of dollars in U.S. investments. Those who subverted it would feel the United States’ wrath.

“If we are to be effective, if we are to be true to our principles, we must root out corruption wherever it exists,” Ms. Harris said, standing next to Guatemala’s president, Alejandro Giammattei. “That is one of our highest priorities.”

But a year later, Central America has emerged as one of the Biden administration’s biggest foreign policy setbacks. Many nations have slid deeper into authoritarianism and poverty and sent record numbers of migrants to the U.S. southern border, leaving the region’s fragile democracies in the worst state since the Cold War, according to former U.S. diplomats and civil society leaders.

In Guatemala, Central America’s most populous nation, Mr. Giammattei has methodically dismantled the last vestiges of independent institutions. One by one, his government has jailed, exiled or silenced the very people the United States said would underpin its efforts to make Guatemala a more fair and ultimately more livable society: independent judges, prosecutors, journalists and human rights activists.

President Daniel Ortega of Nicaragua has over the past year jailed or forced into exile nearly all dissident voices, turning the country into a totalitarian state. El Salvador’s president, Nayib Bukele, who has used a crackdown against gangs to suppress free speech, announced Thursday that he would seek a second term in the next elections despite the Salvadoran constitution’s explicit ban on re-election.

And even in the region’s strongest democracy, Costa Rica, the newly elected president, Rodrigo Chaves, has launched unprecedented attacks against journalists investigating accusations of sexual harassment and financial misconduct, calling them “rats” and using executive powers to starve their outlets of revenue.

“Everything that the U.S. has done to create conditions to stabilize and improve the region has failed to bring results,” said Manfredo Marroquín, the head of Citizen Action, a Guatemalan anti-corruption policy group, and one of the last civil society leaders inside the country. “It was an empty bluff.”

Though chronic poverty and inequality, which have been deepened by the pandemic and global inflation, are the main drivers of Central American migration, impunity and corruption are worsening living conditions and adding to the exodus.

In Guatemala, a top judge and a senior prosecutor who investigated corruption cases involving the president both fled the country this year to avoid arrest, despite Washington’s pleas to protect their positions. The head of Guatemala’s top independent news outlet, elPeriódico, which extensively covered those cases, was jailed in July, accused of money laundering.

And Mr. Giammattei’s picks for attorney general and head of an anti-corruption prosecution unit, which Ms. Harris said would work with American law enforcement to investigate graft, have instead been banned from the United States for undermining corruption investigations.

Despite the Biden administration’s emphasis on reducing migration from Central America, people are still heading north in enormous numbers.

U.S. Border Patrol recorded more than 600,000 apprehensions of Guatemalans, Hondurans, Salvadorans and Nicaraguans — the four main groups of Central American migrants — in the first 10 months of this fiscal year, a record high and a 4 percent increase from the same period in 2019. The upticks mirror an overall sharp rise in border crossings under the Biden administration.

The numbers have risen even as the Biden administration has maintained some Trump-era agreements with Central American leaders to control migration. The government of Guatemala accepts weekly deportation flights from the United States and has mostly broken up migrant caravans on its borders.

The Biden administration’s unwillingness to apply more pressure on increasingly autocratic governments is in part driven by a desire to preserve support for its migration and security policies in Central America, said former U.S. officials and civil society leaders.

U.S. officials and people close to the administration say the democracy push in Central America is a long-term task and that the authoritarian backlash shows that corrupt officials feel threatened by Washington’s policies.

“We recognize that we are dealing with deep and entrenched challenges and problems that existed for centuries,” said Ricardo Zúniga, a senior official at the State Department’s Bureau of Western Hemisphere Affairs. “This is a process; we understand that these are conditions that are not going to change overnight.”

Washington, Biden officials emphasized, can bypass corrupt governments and work with private sector, civil society and honest officials in the judiciary and congress to advance democracy.

“There are ways to find actors within every current government that are willing to do the right thing,” said Todd Robinson, an assistant secretary of state and a former U.S. ambassador to Guatemala.

Mr. Robinson acknowledged that the U.S. government’s dual priorities of controlling migration and supporting democracy can clash but said Washington can effectively pursue both goals simultaneously.

“There is tension, but that is part of being a large government,” he said.

Administration officials have increasingly emphasized efforts to boost private investment to Central America, another plank of Washington’s policy to tackle migration, and say they have secured $3.2 billion in investment commitments in the region.

The downplaying of expectations stands in sharp contrast with the forceful language used by senior Biden officials in the early days of the administration.

“The people, I think, need to understand that four years of ignoring corruption under the Trump administration have ended,” Juan Gonzalez, the White House’s chief Latin America adviser, told a Guatemalan newspaper, La Hora, in January 2021.

“A leader who is not ready to combat corruption won’t be an ally of the United States,” he said in a separate interview with a Salvadorean news website, El Faro.

The presidents of Guatemala, El Salvador and Nicaragua have responded to Washington’s call for local allies by accelerating the attacks on democratic institutions within their nations.

The founders of La Hora have been summoned for questioning by pro-government prosecutors for allegedly revealing classified information. Five journalists of El Faro had to leave El Salvador because of fear of prosecution.

The Biden administration has revoked the visas of more than 60 government officials and businessmen in Central America for undermining democracy and has expressed public support for civic leaders facing persecution.

But diplomats and civil society leaders called the administration’s response muted and said that it has only emboldened authoritarians.

In May, Mr. Giammattei renewed the appointment of the country’s attorney general, María Consuelo Porras, who is under sanction by the United States.

“The United States has lost its ability to influence the region,” said Claudia Escobar, a former senior Guatemalan judge who now teaches at the George Mason University in Washington.

Mr. Giammattei’s and Ms. Porras’s offices did not respond to requests for an interview.

So far, the Biden administration has largely stopped short of using financial sanctions in Central America that were used extensively, if to little effect, by Mr. Trump in nearby Cuba and Venezuela. Since President Biden took office, only seven Central American officials and their associates have been sanctioned under the so-called Global Magnitsky Act, which allows the U.S. government to freeze and expropriate assets of foreign nationals accused of human rights violations, according to the State Department.

Another tool created by the Biden administration to defend the rule of law in Central America, the Justice Department’s Anticorruption Task Force, has not issued an indictment since being formed a year ago.

In defense of their strategy, U.S. officials point to Honduras, whose citizens voted out the corrupt and authoritarian government of Juan Orlando Hernández last year. In April, Mr. Hernández was extradited to New York in shackles to face drugs-related charges, a reminder, U.S. officials say, of the long reach of the American justice system.

His successor, Xiomara Castro, has stopped Mr. Hernández’s worst abuses of power, though she, too, has so far failed to make good on her campaign promise to tackle corruption and expand human rights.

Yet such democratic transfers of power remain elusive in other key Central American countries. Mr. Bukele remains wildly popular, Nicaragua’s Mr. Ortega has jailed or exiled all opposition leaders and in Guatemala, the opposition remains too fragmented to seriously challenge Mr. Giammattei’s coalition in elections scheduled next year.

“The United States will not save our lives,” said Jordán Rodas, Guatemala’s former human rights ombudsman, who left the country hours before the end of his term in August. “But they can play an important part by helping guarantee transparent elections that give us an opportunity to choose change.”