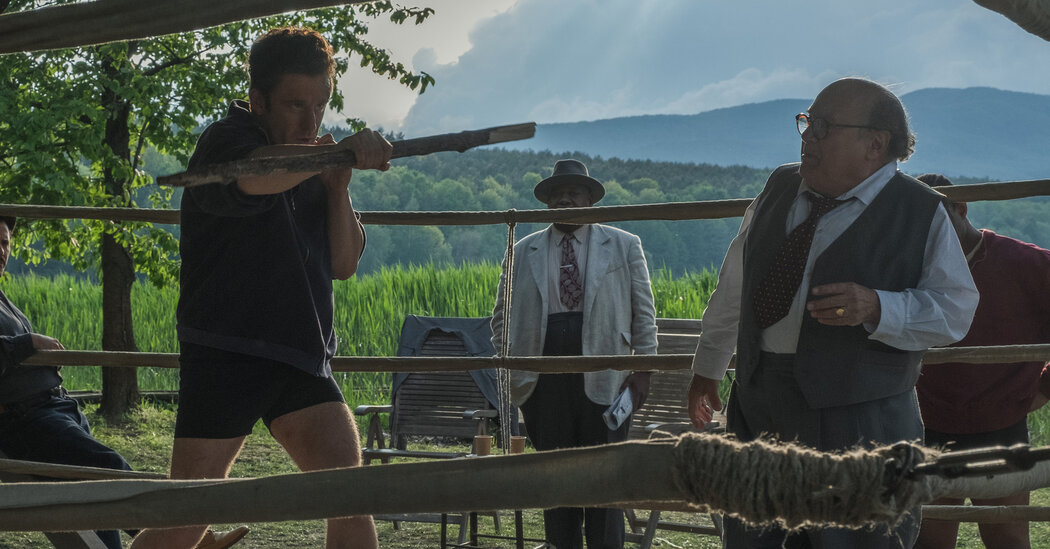 Among the lesser-known atrocities perpetrated by the Nazis during World War II were boxing matches that forced emaciated Jewish inmates to fight each other to the death for the entertainment of the German SS officers.

Like gladiatorial contests in the Roman Empire, these could go on interminably until one bare-knuckled fighter left the other bloodied and unconscious, so weakened he was useless as a slave laborer and would be hauled off to a gas chamber or crematorium or shot on the spot. While the officers cheered the winner, his prize might be an extra dollop of food so he could have the strength to fight again.

Whatever satisfaction the winner felt easing his hunger pangs, he had to grapple with his guilt at doing his tormentor’s bidding by brutally killing another person, usually another Jew. Yet like the protagonist of “Sophie’s Choice,” he was in an impossible dilemma: If he lost, it was he who would likely have been killed.

A new film, “The Survivor,” directed by Barry Levinson and starring Ben Foster, that opens Wednesday, the start of Holocaust Remembrance Day, on HBO and HBO Max, tells the story of one of these boxers: Harry Haft, an illiterate roughneck from a Polish industrial town near Lodz and one of eight siblings. He survived much of the war by clobbering opponent after opponent, 75 bouts in all, in a coal-mining subcamp of Auschwitz.

After the war, Haft took the skills he absorbed in the camps to America. He hoped that newspaper articles about his professional boxing matches might be read by a fiancée whose disappearance haunted him or by the siblings and other relatives he had been unable to trace.

The highlight of his two-year career was a 1949 match in Providence, R.I., against Rocky Marciano, who was on his way to becoming a world heavyweight champion, the only one at that point to retire undefeated. The 24-year-old Haft, wearing purple Everlast trunks with a Star of David stitched on, lasted into the third round when a barrage of blows from Marciano flattened him. Haft later claimed that he threw the fight after three gun-toting mobsters came to his locker-room and threatened his life.

Yet he was never able to moderate the anger that consumed him at all that he had suffered, including the deaths of his mother and six of his brothers and sisters. Short-tempered, Haft would slap and kick the older of his two sons for minor misbehaviors, verbally attack his wife and daughter, and frequently threaten to kill himself if things didn’t go his way, his older son, Alan Scott Haft, said in a video call. When his daughter, Helene, decided to marry a gentile, he punched out the windows in his home.

“I had my share of beatings,” said Haft, who is now 71. “My sister had her share of abuse. My mother excused everything by saying, ‘It’s his background.’ Who wanted to hear about his background!”

The Holocaust has shadowed the lives of several members of the creative team behind the film, which is based on Alan’s 2006 biography of his father, including two actresses who are the grandchildren of survivors, and the screenwriter, Justine Juel Gillmer, whose maternal grandmother served in the Danish underground that rescued most of that country’s Jews. Matti Leshem, one of the producers and the man credited with bringing Haft’s story to the screen, is the son of a Czech man who during the war was forging documents that were used to furnish Jews with Christian identities. His father could not persuade his mother and sister to flee, and they perished in Auschwitz and Terezin.

“He only told me that story once,” Leshem said in an interview. “You can understand why I wanted to make the film. Harry Haft was the most extreme example of someone who had to create a morally untenable life for himself or die. His PTSD is not surprising.”

Levinson, the Oscar-winning director of “Rain Man,” “Wag the Dog” and other movies, said he was drawn to the script, by Gillmer, because of his memories of the time his great-uncle, Simcha, was put up on a cot in Levinson’s bedroom for two weeks. At 6, he was too young to be told that Simcha was a survivor of the concentration camps or to understand what that meant.

“Every night, he would wake up screaming and yelling in a language I did not understand — over and over,” Levinson recalled in a telephone interview. “They didn’t call these nightmares PTSD. They brushed them aside as ‘the past is the past.’ But some people are haunted and can’t get past and it affects their relations with those around them.’

With “The Survivor,” he said, he wanted to explore how an experience like a war or a concentration camp colors the remainder of a life.

The movie’s star, Ben Foster, is not a survivor’s descendant; his grandmother immigrated here in the 1920s to escape pogroms in Ukraine. Nevertheless he took his obligation to capture Haft’s conflicted character so intensely that he underwent a striking physical transformation. He lost 62 pounds over five months so he could play the skeletal but still sinewy camp inmate, and then put all that weight and more back on so he could be true to the physique of the pudgy, middle-aged Haft, who for most of his working life owned fruit and vegetable stores in Brooklyn.

Although the subject of concentration camp boxers is obscure, it has been so cinematically compelling that there have been three other movies based on the lives of men who boxed to survive, said Rich Brownstein, author of a recent book that assesses 400 Holocaust films. The first, released in 1989, was “Triumph of the Spirit” starring Willem Dafoe as a Jew, Salamo Arouch, who before the war had been the Greek middleweight champion and fought 200 bouts in Auschwitz.

“The Survivor” takes a few artistic liberties. Haft became the protégé of an SS officer named Schneider, who hoped Haft would vouch for his benevolence should the Allies prove victorious. The film depicts Haft killing Schneider after escaping a harrowing march between camps as Allied soldiers approached. But he did not kill Schneider. He killed a nameless SS man to don his uniform as a disguise. He also killed a farming couple whom he feared might turn him in.

Harry Haft had tried since Alan’s college days to get Alan to write down his story and he finally forced the issue. In 2003, he visited his son in Tampa and over two days spun out his history on 20 tapes, which became the essential source for the 2006 book. His father, he said, hoped that his son, by appreciating the brutality of his life and the impossible choices he faced, would understand why Haft had been so tormented.

“He wanted to apologize for being such a bad father,” Alan said.

His father had also not shaken off the guilt for what he did to his opponents as a boxer in the concentration camps. Alan recalled that in 2007, a few months before Harry died of lung cancer at 82, he was inducted into the National Jewish Sports Hall of Fame. A journalist asked him if he had any regrets. He looked at his gnarled fists and said: “My regrets are the lives that passed through these hands.”