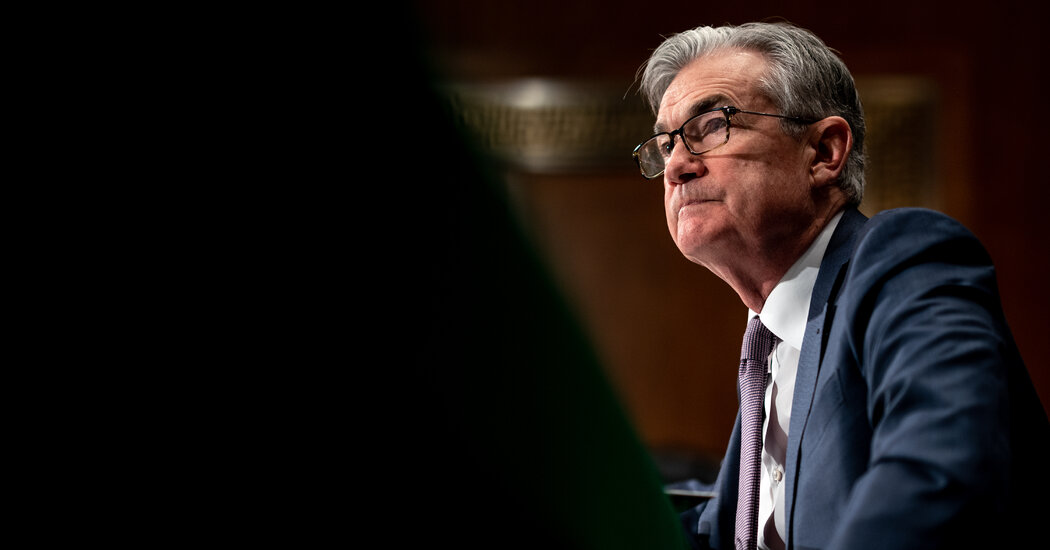 On Wednesday, the S&P 500 stock index jumped 3 percent, as though all was right with the world. On Thursday, stocks collapsed, with the tech-heavy Nasdaq index plunging 5 percent as though the end of times was in sight.

Things on Friday aren’t much clearer: Stocks swung back and forth in early trading.

If you are looking for patterns in these crazy swings, the answer is simple: The financial markets are coming to grips with a stunning policy change by the Federal Reserve.

Over the last two decades, financial markets may have become so accustomed to encouragement from the Fed that they just don’t know how to react, now that the central bank is doing its best to slow down the economy.

But the Fed’s intentions are evident, if you read and listen.

Jerome H. Powell, the Fed chair, said unequivocally during a news conference on Wednesday that the central bank is really and truly committed to driving down inflation. A transcript of Mr. Powell’s words is available on the Fed site. So is the text of the Fed’s latest policy statement. Check for yourself.

The Fed is willing to increase unemployment in the United States if that is what’s required to get the job done. And while they would much prefer that the United States doesn’t fall into a recession, Fed policymakers are willing to take the heat if the economy falters.

This may be hard to accept, and for a good reason.

Pretty much since the start of the great financial crisis that began in 2008, the loose monetary policy of this very same Federal Reserve has repeatedly propelled financial markets to giddy heights. By reducing short-term interest rates to virtually zero and by buying trillions of dollars in bonds and other securities, the central bank kept the financial system from freezing up, and then some. It stimulated business activity, effectively lowered the yields of a broad range of bonds and encouraged investors to take risks. That drove up the stock market.

These extraordinarily generous policies are at least partly responsible for the current burst of inflation — the most serious episode of rising prices since the 1980s.

Understand Inflation in the U.S.

Yet at its latest policymaking meeting on Wednesday, the Fed made it more obvious than ever that it has shifted its policy in a fundamental way. That is, understandably, extremely difficult for financial markets to digest.

“This is a very big change, and the markets are having trouble processing it,” Robert Dent, senior U.S. economist for Nomura Securities, said in an interview.

No wonder the markets have been swerving wildly, falling one day, rising the next, but trending downward since the beginning of the year.

“Because the risks that the economy faces and that the Fed faces are so great, and because the responses by the Fed could be so significant, you’re seeing swings that are very big every day,” Mr. Dent said. “Swings that a year or 24 months ago would have been highly unusual are now the norm.”

Yet the current situation is anything but normal.

The Covid pandemic has left millions of casualties worldwide, and it’s not over. From the narrow viewpoint of economics, the pandemic threw supply and demand for a vast range of goods and services out of whack, and that has baffled policymakers. How much of the current bout of inflation has been caused by Covid, and what can the Fed possibly do about it?

Then there are the continuing lockdowns in China, which have reduced the supply of Chinese exports and dampened Chinese demand for imports, both of which are altering global economic patterns. On top of all that is the oil price shock caused by Russia’s war in Ukraine and by the sanctions against Russia.

Until late last year, the Fed said that the inflation problem was “transitory.” Its response to an array of global challenges was to flood the U.S. economy and the world with money. It helped to reduce the impact of the 2020 recession in the United States — and it contributed to great wealth-creating rallies in the stock and bond markets.

But now, the Fed has recognized that inflation has gotten out of control and must be significantly slowed.

This is how Mr. Powell put it on Wednesday. “Inflation is much too high and we understand the hardship it is causing, and we’re moving expeditiously to bring it back down,” he said. “We have both the tools we need and the resolve it will take to restore price stability on behalf of American families and businesses.”

But its tools for reducing the rate of inflation without causing undue harm to the economy are actually quite crude and limited, he later acknowledged, in response to a reporter’s question. “We have essentially interest rates, the balance sheet and forward guidance, and they’re famously blunt tools,” he said. “They’re not capable of surgical precision.”

As if that were not scary enough, for an operation as delicate as the Fed is attempting, he added: “No one thinks this will be easy. No one thinks it’s straightforward, but there is certainly a plausible path to this, and I do think there, we’ve got a good chance to do that. And, you know, our job is not to rate the chances, it is to try to achieve it. So that’s what we’re doing.”

Well, fine. The Fed needs to make the attempt, but given the precariousness of the situation, the high volatility in financial markets is exactly what I’d expect to see.

The Federal Reserve is committed to continuing to raise the short-term interest rate it controls, the Fed Funds rate, to somewhere well above 2.25 percent. Only a few months ago, that rate stood close to zero, and on Wednesday, the Fed raised it to the 0.75 to 1 percent range. The Fed also said it would begin reducing its $9 trillion balance sheet in June by about $1 trillion over the next year, and it continues to issue cautionary “forward guidance” — warnings of the kind that Mr. Powell made on Wednesday.

Watch out, he was essentially saying. Financial conditions are going to get much tougher — as tough as needed to stop inflation from becoming entrenched and deeply destructive. The Fed will be using blunt instruments on the American economy. There will be damage, inevitably. People will lose their jobs when the economy slows. There will be pain, even if it isn’t intended.

In the financial markets, short-term traders are unable to make sense of all this. The day-to-day shifts in the markets are about as informative as the meandering of a squirrel. But for those with long horizons, the outlook is straightforward enough.

A period of wrenching volatility is inescapable. This happens periodically in financial markets, yet those very markets tend to produce wealth for people who are able to ride out this turbulence.

It is important, as always, to make sure you have enough money put aside for an emergency. Then, assess your ability to withstand the impact of nasty headlines and unpleasant financial statements documenting market losses.

Cheap, broadly diversified index funds that track the overall market are being hit hard right now, but I’m still putting money into them. Over the long run, that approach has led to prosperity.

Count on more market craziness until the Fed’s struggle to beat inflation has been resolved. But if history is a guide, the odds are that you will do well if you can get through it.