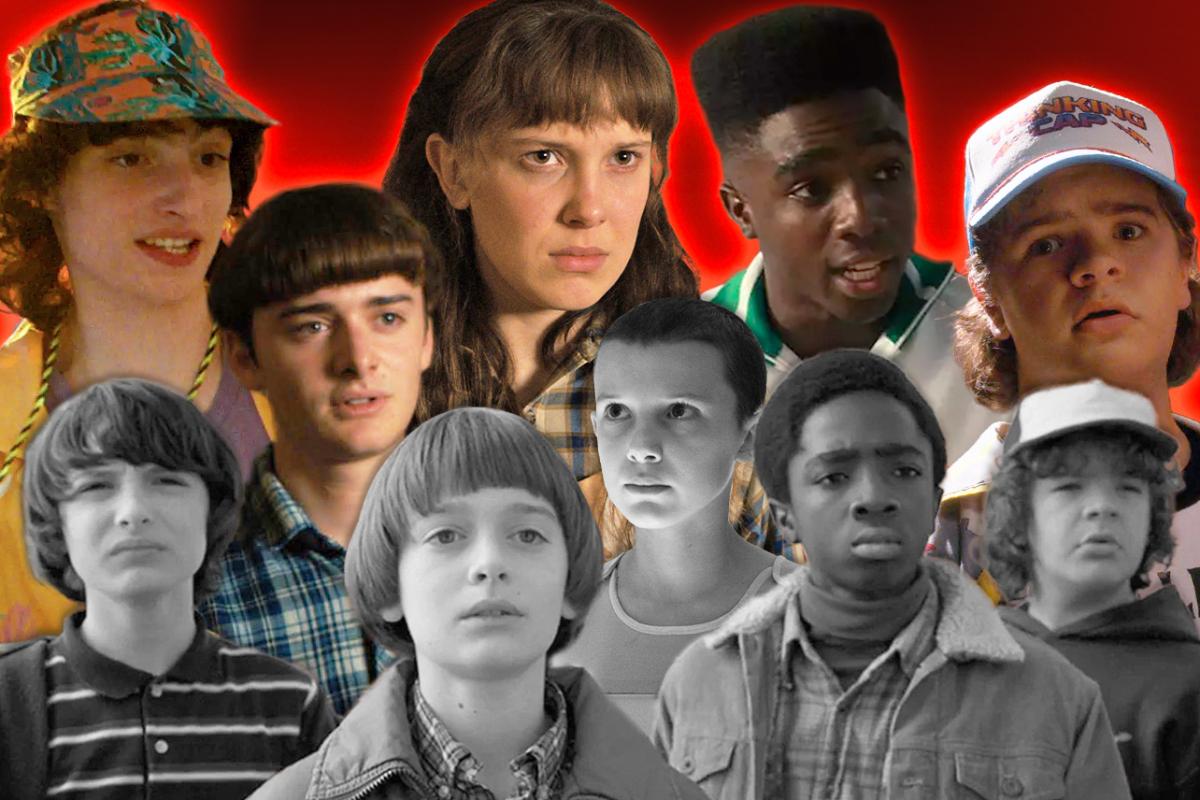 Stranger Things started off as a show about a plucky group of kids fighting a home grown supernatural threat in their suburban neighborhood. The middle schoolers communicated over walkie talkies and traveled through their native Hawkins on bicycle. They played Dungeons and Dragons in basements and obsessed over junk food, namely Eggo’s. Most notably, though, the five main child actors — Millie Bobby Brown, Finn Wolfhard, Gaten Matarazzo, Caleb McLaughlin, and Noah Schnapp — were roughly the same exact ages of their characters. They were tweens just barely tip toeing into the hormonal swamp of puberty. This was the reality that Stranger Things started off with and now, in Season 4, the show has bizarrely ignored how its core cast has matured into tall, sexy grown up people in the past six years.

Yeah, it’s been six years since the first season of Stranger Things premiered on Netflix, or seven years since showrunners the Duffer Brothers shot those iconic episodes. Season 1 of Stranger Things is set in fall 1983. Season 4 is set a mere two and a half years later, in spring 1986. The former tweens are playing high school freshmen while the actors playing them look old enough to rent cars. To be fair, Millie Bobby Brown only just celebrated her 18th birthday, but the reality is these “kids” are actually full grown adults. So why is Stranger Things trying to trick us into believing they’re still years away from their learner permits?

Hands down, the scariest part of Stranger Things Season 4 is how the Netflix show refuses to let these darn kids grow up already!

As we already established, Stranger Things Season 4 takes place a mere six months after the events of Stranger Things Season 3. That last season began to deal with its aging cast by addressing puppy love head on. Mike and Eleven would make out constantly while Lucas and Dustin were juggling their own girlfriends. The kids weren’t quite kids anymore, after all. They were about to be high school freshmen and they all looked in. By this point, in 2019, the kids were now all in their early teens. Not old enough to drive or party hard, but old enough to hang at the mall or kiss at school dances.

Stranger Things Season 4 went into production immediately after Season 3, but was derailed by Covid-19. This two to three year delay took place during what might be the most transformative time in the young cast’s lives outside of early childhood. The way people mature between their early and late teens is literally wild. We get as tall as we’re ever going to be, shed baby fat that was softening up our cheeks, and leave all the innocence of childhood behind forever. So the idea that Stranger Things wants us to carry on like its young cast hasn’t undergone a metamorphosis is more mind-blowing than anything the Upside Down could throw our way.

To be sure, there is a long history of shows that cast twenty-somethings (and even thirty-somethings) as teenagers. The problem is those casting choices are usually built into the DNA of those shows from Day 1. The show asks us to suspend our disbelief and accept these older actors as younger teens as a stylistic choice. For its first three seasons, however, Stranger Things cast young actors who were roughly the same age as their tween characters. So it’s a betrayal of the show’s own logic to ask the audience to suddenly buy into a version of Hawkins where high school freshmen look like they’re ready for college.

Now here’s the thing: Millie Bobby Brown, Finn Wolfhard, Gaten Matarazzo, Caleb McLaughlin, and Noah Schnapp still do pass for high school students, just not freshmen. They look like they’ve aged two to three years, because that’s what’s literally happened. If the Duffer Brothers had simply moved the events of Stranger Things Season 4 to 1988 or 1989, there would be no issue accepting these new gargantuan versions of the kids we met back in 2016. They would simply be — get this — playing their ages, like they’ve always done.

Furthermore, nothing major would change in the plot of Stranger Things with such a small time jump. If anything, the darker, “scarier,” more mature storyline would hit all the harder. Instead of watching friends just beginning to drift apart, we could reunite with these characters after they’ve already gone their separate ways. With a few years of peace, they could have been lulled into thinking the fight was over. When Vecna strikes, they’d have to come back together, reclaim their friendships, and face a score of deeply buried traumas. Instead, these characters feel stunted, even trapped in the rhythms of their past selves when they’ve clearly all grown up.

Stranger Things Season 4 has a lot of good and a lot of bad, but the worst, most frustrating part, is the ridiculous way the show seems hellbent on ignoring what’s right in front of their eyes: the kids have grown up. So let them grow up already.