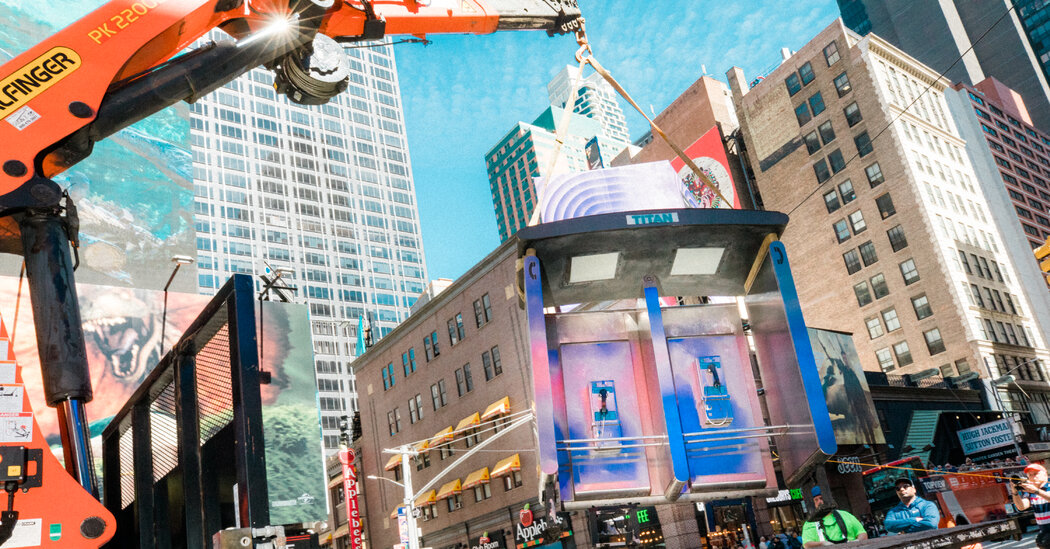 At one point in time, you couldn’t walk 30 feet on a New York City block without encountering a pay phone. A look at the last ones.

By Ann Chen and Aaron Reiss

As a curious crowd gathered in Times Square on Monday, a power saw cut through the base of a pay phone on the southwest corner of Seventh Avenue and 50th Street. According to the city’s news release, this was “the final New York City public pay telephone.”

In the early 2000s, there were nearly 30,000 public street pay phones registered with the city — according to Stanley Shor, who served as an assistant commissioner overseeing pay phones — blanketing the five boroughs in booths, pedestals, bubbles and pillars. But for the last seven years, the city has been quietly removing them. Now, the only official pay phones on New York City streets will be four phone booths maintained in perpetuity on the Upper West Side of Manhattan.

In the age of the smartphone, it may be hard to recall the importance of pay phones in the daily life of New Yorkers — but at one point in time, you couldn’t walk 30 feet on a city block without encountering one, around the early 2000s when there was an uptick in street side pay phones. As Lilly Tuttle, a curator at the City Museum of New York, explained: “New York is a dense, pedestrian city. It wasn’t until the 1940s that even half of Americans had a phone. If you need to make a call on the go, the pay phone was really necessary.”

Myles MacLaren, who was present for Monday’s phone removal in Times Square, grew up nearby in the 1970s. He remembered the phones well. “We lived in a one-bedroom apartment with six people, two dogs, four cats and two goldfish,” he said. Privacy was hard to come by in the MacLaren household, “so the corner pay phone was my lifesaver in high school.”

Before the 1980s, the telephone companies had a monopoly on installing, operating and maintaining public phones on city streets and sidewalks, but it proved a major undertaking. By 1970, vandalism and theft — in the form of jamming, or stuffing pay phone coin slots with objects like chewed gum, ripped matchbox covers and bits of plastic bags — meant that one out of ten pay phones in the city did not function.

In 1984, pay phones were deregulated nationwide, opening the market to thousands of small and independent entrepreneurs who rushed to get in on the game. John Porter started his pay phone operating business in New York City in 1997. Porter remembers this time as a kind of gold rush. “In the old days, you could just drill holes in the sidewalk,” he said. “It was a free enterprise, people were just putting up pay phones on any hot spot they could.”

But nostalgia was not enough to combat the growing ubiquity of cellphones. Pay phones were increasingly viewed as visual “blight” and a waste of precious sidewalk real estate. In 2014, the end of street pay phones was all but finalized as CityBridge began installing LinkNYC kiosks. By then, most of the companies running pay phones in New York either went out of business or sold off their holdings, often leaving their phones hanging around the city with no dial tones, like vestigial organs.

While pay phones have played a vital role in more recent emergencies like Sept. 11 and Hurricane Sandy — when blackouts and limited cellphone service outages brought them back into emergency use — they are more or less incongruous with the way people communicate today. LinkNYC booths not only allow no-cost phone calls to any number in the U.S. but also provide Wi-Fi and device charging. “Just like we transitioned from the horse and buggy to the automobile, and from the automobile to the airplane,” Matthew Fraser, the city’s chief technology officer, explained in an emailed statement, “the digital evolution has progressed from pay phones to high-speed Wi-Fi kiosks to meet the demands of our rapidly changing daily communications needs.”

Even Thomas, who has spent decades documenting and exploring these pieces of bygone infrastructure, understands that there isn’t a lot of love lost in the pay phone removals. “People talk about them today like they were these magical booths of privacy and seclusion, but people really didn’t like them,” he said, adding that pay phones were often claustrophobic and cramped and used alternately as urinals or trash cans. “I think most people’s instinct was to get the hell out of them as soon as they could. I think that’s the real history of phone booths.”

Aside from any defunct street pay phones that may have slipped through the bureaucratic cracks, all that remains are the physical scars in the urban fabric marking where pay phones used to be: discolored patches of fresh concrete on the sidewalk, crumbling telltale screw holes, rectangular patches of mismatched paint on the sides of buildings.

When Monday’s news conference ended, a platform truck carrying the pay phone pulled into traffic and drove off. This particular phone shelter has been acquired by the Museum of the City of New York, but Steve Flinchbaugh, a member of the removal crew, said that most of the removed phone booths ended up back in his employer’s yard. “The sheet metal parts come off and get scrapped. But other than that, they have no value. They’re just stainless steel.”

Surfacing is a visual column that explores the intersection of art and life, produced by Alicia DeSantis, Jolie Ruben, Tala Safie and Josephine Sedgwick.