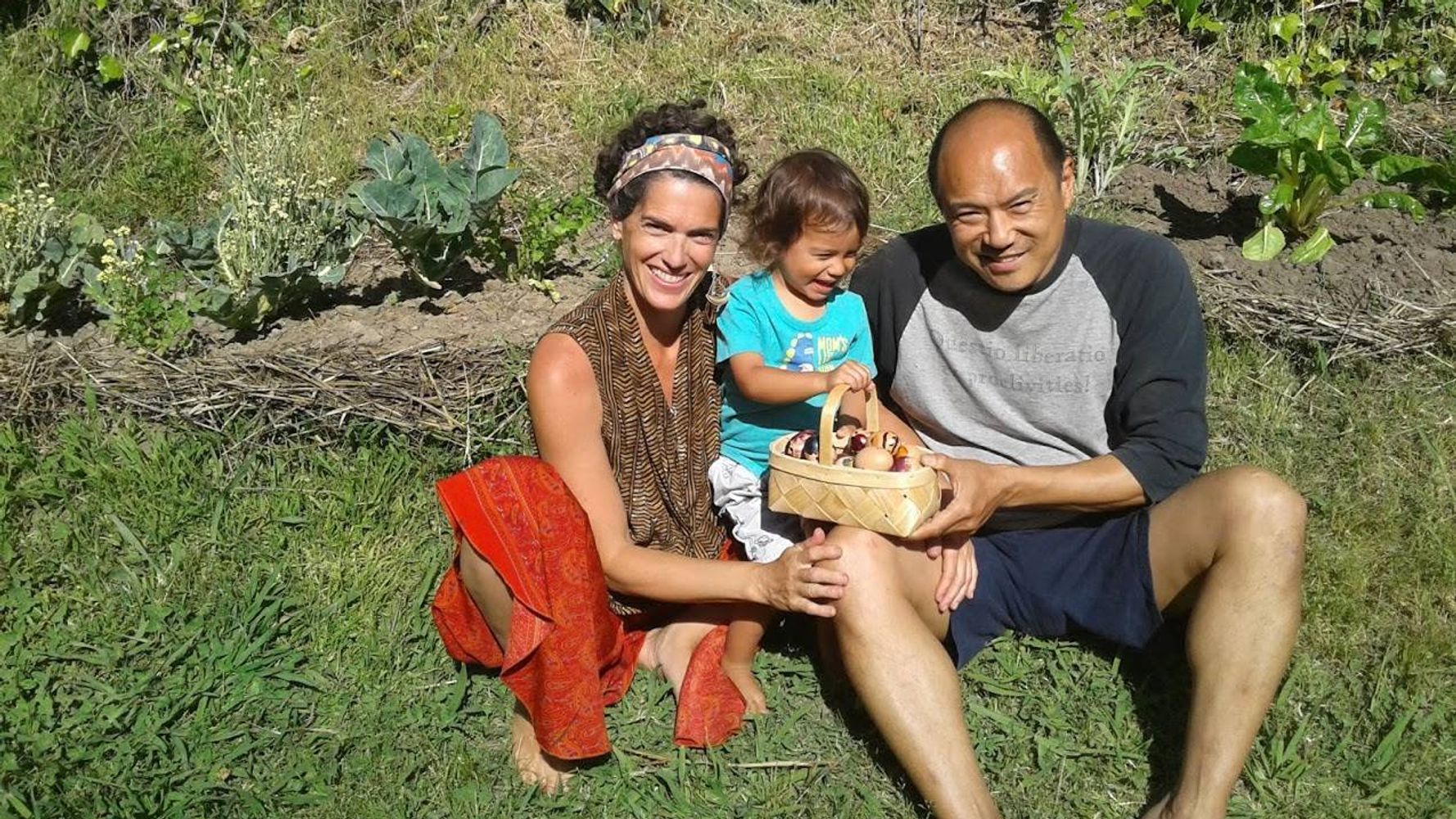 I lost the love of my life to a recurrence of liver cancer right before the pandemic hit.

By June 2019, my partner Burt had survived six rounds of chemotherapy and 48 sessions of radiation. Granted remission, we downsized our SoCal life, stored our remaining possessions and headed south of the border. Ticking items off of our family bucket list along the way, we landed in Ecuador where, six months later, Burt’s cancer returned.

For weeks, my son and I watched as our beloved Papa became skeletal in his appearance. The whites of his eyes took on a yellow tinge and his liver was protruding beyond the right side of his rib cage. At the hospital, Ecuadorian doctors told us there was little they could do.

Ten days later, Burt passed away peacefully in the two-bedroom casita that we had rented just months before, surrounded by rose bushes and fruit trees.

How utterly raw I felt those first mornings after Burt died. Tears streamed down my face as I gazed into the blue, Ecuadorian sky perched above verdant green mountainsides. Pedaling the bike I had recently purchased in order to distract my son and me from the health crisis our little family was once again absorbed in, I would talk to Burt in the cumulus clouds overhead as I rode along the flat trail running beside the Rio Chamba.

“Why did you have to die, Burt?” I would plead.

The best I could do was remain focused on the day-to-day tasks that kept our small world from falling apart, like continuing to get my 5-year-old son to and from school. Cee understood that his father was now in the “spirit world,” thanks to having watched the movie “Coco” the year before, but had no sense — nor did I — of the long-term effects that would come with having lost his favorite playmate.

We participated in the vigil that our new community, composed of local Ecuadorians and international families, hosted for us in the public square of our quaint pueblo, even though I would have preferred to stay in bed and bury my head under my pillow.

“Cee understood that his father was now in the ‘spirit world,’ thanks to having watched the movie ‘Coco’ the year before, but had no sense — nor did I — of the long-term effects that would come with having lost his favorite playmate.”

One month later, I returned with my son to San Diego County ― where we no longer had a car or home ― to memorialize his daddy with a full weekend of events.

Days later, shelter-in-place orders fell upon the state of California like a curtain closing on a final act. We were fortunate to have a couple we knew, recent empty-nesters, welcome us into their home, even as we were navigating the uncharted waters of a global pandemic.

In shock without even realizing it, I was becoming increasingly annoyed with my son, especially at bedtime. Cee wanted to wrestle and play like he did with his dad, whereas I wanted to just roll over and go to sleep. I’d been raised in a home antagonistic toward empathy, where cycles of physical and emotional abuse played out ― I knew my son and I wouldn’t survive isolation without Burt’s gentle, nurturing love balancing out my fierce nature.

So, I bought a renovated van and committed to the road-school adventure that Burt and I had once fantasized about. Since then, I’ve done my best to prioritize my and my son’s mental health amid environmental calamity and worldwide chaos.

The first “Mama Caravan” tour that Cee and I completed was an over-3,000-mile loop that we made up the West Coast, into the Pacific Northwest, across to Montana and then back to San Diego. It was comforting doing the thing that Burt and I had once talked about. I also intuited that ample time spent camping in nature was going to be one of the biggest healers for my and my son’s broken hearts.

Burt’s presence strongly accompanied us on this first journey. I often heard messages from him through songs on the radio. I also felt Burt in the rustle of the wind through the trees and other animal messengers that visited us along the way.

Early on in our caravan journey, I experienced an upwelling of rage over the injustice of it all; that my willfully vulnerable and unconditionally loving man was taken from us at just 53 years of age, and meanwhile, judgmental and hard-hearted people continued to live all around us up into their 90s.

Before we first departed San Diego County, we stayed outside the garage of another dear friend’s home. With her encouragement, I took a wood baseball bat from a bedroom corner and beat her firm mattress with everything I had. Legs wide, my knees bent, I swung the bat from behind the back of my head and down onto the bed, over and over again until I could go no more. In the doorway, at a safe distance, my son and friend’s youngest daughter witnessed my physical demonstration of raw power.

Feeling emptied of the extreme pit of rage that had been boiling in my gut, I drove east later that afternoon when Cat Stevens crooned over the radio. That memorable voice elicited a vision of Burt’s entrance into my life nine years before.

Burt and I met at a housewarming party. A week later, he showed up to my dance studio, briefcase in hand, beat-up jalopy parked down below the East Village’s three-story Art Building.

Back then, my ego was highly resistant to the change that Burt represented. All I had ever known of love, especially intimacy between a man and a woman, was painful. “He’s too old, too bald, too short, and with too much baggage,” my fearful mind judged.

But soon enough, Burt’s unabashed adoration had won me over and, the next thing we knew, we had conceived our son ― my first child, and the third that he would have a hand in raising.

In recalling all of this, I cried and cried as our son sat safely corralled in the back of the van. For someone like me who, at a young age, internalized a message that vulnerability is meant to be hidden and tears withheld in public, my job is to exercise my crying muscles. When I am feeling irritable and demonstrating behaviors of emotional unavailability by tuning out of life, like endlessly scrolling through my phone, then I know that I need to cry.

In a Redwood copse found outside of Olympia, Washington, I dropped to my knees and begged for help. At this point in our adventure, it had been six months since Burt had died, and our 5-year-old son had become familiar with hearing me say that I needed some space and time to myself so that I could grieve.

I have to do this because I no longer have another adult around 24/7 whom I can lean on for support, especially in terms of caring for a young child. So, I shake my body, hold my heart and try to really feel my sadness and pain. I lay on my back as I kick and pound my fists on the ground — like a child having a fit. I also have a “Dance My Grief” playlist and usually, specific songs help me to have the deep, guttural cry that my emotional body needs.

“When I practice my dances of grief, I am more present to both myself and my child and available to respond in more loving ways to whatever life brings.”

I won’t lie, though. Feeling isn’t fun. It’s uncomfortable, messy and a little scary. I never know what lies on the other side of my releasing control and allowing my emotional pain to seemingly swallow me whole. I also look strange and unattractive doing these exercises.

But isn’t this life, too ― ugly, unappealing and horrifying? When I practice my dances of grief, I am more present to both myself and my child and available to respond in more loving ways to whatever life brings.

On our third Mama Caravan tour this past summer, Cee and I visited national parks across the upper USA as I drove us over 6,000 miles from New Jersey to Portland, Oregon, and back home to San Diego via old Highway 1 and the 101. It was the summer our souls needed, and we were thrilled to share a campsite with grazing elk and ecstatic to experience the strange bleats of massive bison meandering along the two-lane highway that runs through Lamar Valley.

For me, Yellowstone was the destination since we had first visited Montana the year before. Finally, we had made it! It was as though we were being rewarded for all of the hard, emotional work we had done of staying present to the discomfort of our feelings, as well as in ritualizing each important milestone along our grief journey — such as Burt’s 54th birthday when we released his ashes to the Pacific Ocean, as well as the one-year anniversary of his death, for which we returned to Ecuador to honor him.

This winter has been the most challenging yet. Our second without our dear Papa Burt, and my son has been regularly demonstrating anger and disappointment every morning. He feels frustrated at how he is unable to get the sophisticated foam planes that he builds from memory to fly.

Often, he cries, “I will never have a Daddy!” and I have to keep reminding myself that the most important thing I can do is listen and empathize. Sometimes, I encourage him to beat the bed we share with the stick he found that I keep in our bedroom.

I experience these moments as emotionally intense because my impulse is to do what was done with me, which is to shut it all down and tell Cee how he should feel instead. Rather, however, I aim to keep my heart open as I remind my son that what he needs most in these challenging times is a hug and to maintain physical connection.

When he is calmer, I then remind him that he and I are a team and that we have to stick together because we only have each other. Somehow, I have come to gracefully master this dance of holding loss and pain in one hand while celebrating life and ecstasy with my other, even as our world continues to shake, rattle and roll all around us.