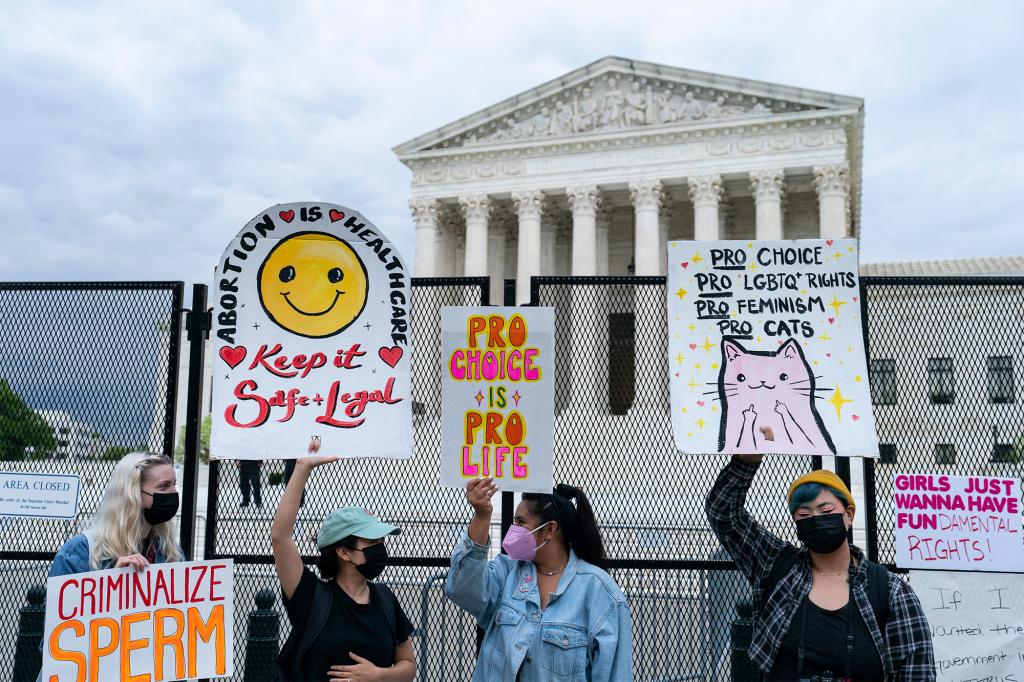 For the past few years, Democrats have worked tirelessly erasing gender in all its forms.

They tell us women who have babies aren’t mothers; they are “birthing people.” They insist men can get pregnant while giving parents of newborns the option of not designating the sex of their baby on his/her birth certificate, despite their infant’s obvious male or female genitalia and other biological gender traits before their eyes — and the eyes of their doctor.

The left has championed transgender men competing in women’s sports, putting biological women at a significant disadvantage, while the Biden administration’s latest addition to the US Supreme Court, Ketanji Brown Jackson, refused to answer a simple question during her recent confirmation hearings when asked to define what a woman is.

The newly confirmed left-wing justice said she couldn’t do that because she isn’t a biologist.

But now that the Supreme Court may overturn Roe v. Wade, the 1973 landmark abortion case, which, if overturned, would leave abortion laws to be determined by the states, Democrats are up in arms accusing those who oppose abortion of not protecting “women’s” rights and “women’s” reproductive health. Huh? I thought women and gender no longer exist according to the left.

Nonetheless, it’s remarkable how quickly the Democratic Party has reversed course and gone back to defending women and women’s rights after systemically attempting to abolish gender from our collective conscience.

Democrats and the radical left seek to erase womanhood in all its traditional forms — when it’s politically expedient — but swiftly pivot to defending women and women’s rights when access to an abortion on demand at any stage of a pregnancy is at stake. And they desperately need a wedge issue to mobilize their voter base come the midterm elections, in which Democrats are expected to get shellacked given the Biden administration’s disastrously low poll numbers.

Regardless of where one stands on abortion, whether you are pro-choice or pro-life, what’s become apparent is that, at minimum, Democrats have a serious messaging problem when it comes to gender and culture wars. At maximum, they’ve lost the moral authority to lecture to the American people what a woman is or isn’t when they talk out of both sides of their mouths.

Take liberal co-host of “The View” Whoopi Goldberg, who was outraged this week about the possible overturning of the controversial abortion case. On her show Tuesday, she railed, “This is my body and nobody . . . you won’t let me make my decisions about my body? You are not the person to make that decision.”

That’s liberal hypocrisy in a nutshell. Democrats pound the table when it comes to abortion rights, cherry-picking when to use the argument “my body and my choice” and saying how dare the government get in between a woman and her doctor. Yet when it comes to government-mandated COVID-19 vaccinations during the pandemic — it’s not your body nor your choice. Instead, they want unelected bureaucrats like Dr. Anthony “flip-flopping” Fauci or the discredited Centers for Disease Control and Prevention making those important health decisions for us.

Never mind if you’re a healthy child or young adult and at very low risk of dying or experiencing severe symptoms from COVID-19. The left still insisted you get vaccinated, regardless of the fact that it doesn’t stop transmission of the virus. They attacked any conservative who dared to mention the scientific existence of natural immunity after contracting COVID-19 and beating it or spoke out against harmful COVID-19 restrictions like oppressive lockdowns or other questionable government-imposed mandates. The left abandoned its “my body, my choice” stance and accused those who wanted to make health-care decisions for themselves of “killing Grandma.”

But in their worldview, killing unborn babies via abortion is apparently A-OK.

The hypocrisy and doublespeak are truly astonishing.