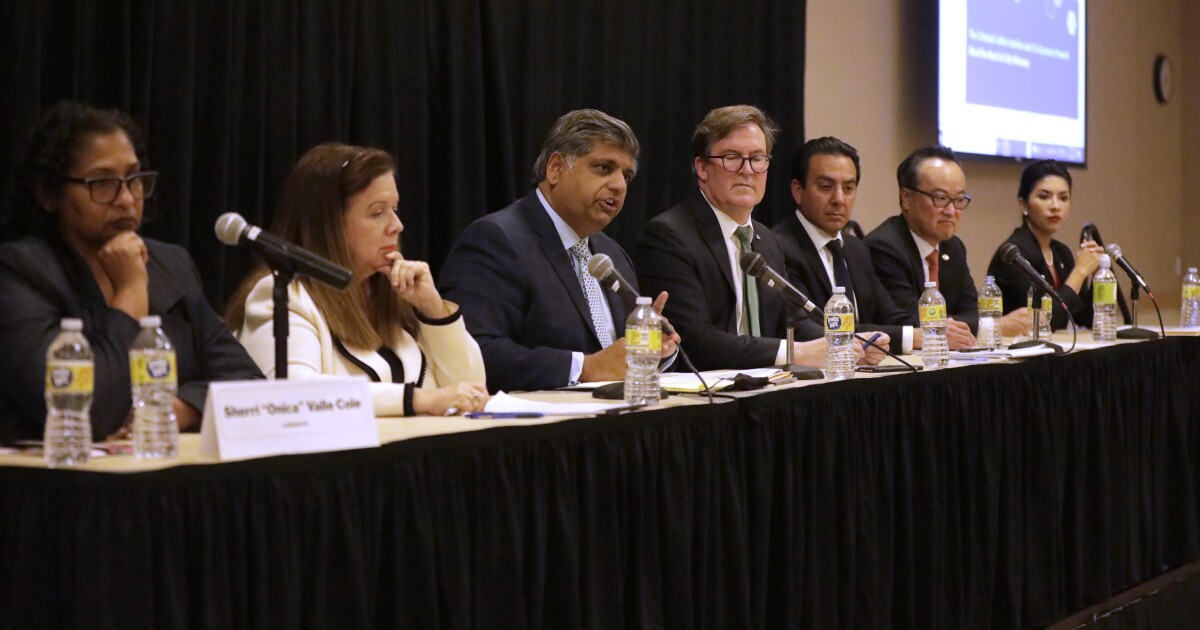 Two top candidates in the race to become Los Angeles’ next city attorney share what some see as a liability: their former allegiance to the GOP.

Both candidates say that they’ve undergone political evolutions since then, including apologizing for past comments on polarizing issues, and that they’ve dedicated themselves to upholding the values of the Democratic Party. But as Gill and James have secured big-name endorsements and amassed sizable campaign war chests, their opponents in the seven-person race clearly see their rivals’ Republican ties as a way to distinguish themselves in deep-blue Los Angeles.

“A lifelong Democrat … ” begins one sentence on the campaign website of attorney Teddy Kapur, treasurer of the California Democratic Party.

“I registered to vote as a Democrat in 1976, and have never been anything else,” finance law attorney Hydee Feldstein Soto said at a recent forum.

Unless a candidate gets more than 50% of the vote in the June 7 primary, the top two contenders head to a runoff in November. And in a break from recent tradition, there isn’t an incumbent or a well-known elected official in the candidate pool.

Although none of the candidates has high name recognition, Guerra thinks James has a slight edge, citing his longtime role as president of the city’s Board of Public Works, which oversees tasks such as street and sewer maintenance. Guerra also expects Torres to do well; he believes Latino voters will be drawn to her surname, as well as the ballot designation touting her experience as a federal prosecutor.

While former affiliation with the Republican Party isn’t a guaranteed deal-breaker in Los Angeles — mayoral frontrunner Rick Caruso only recently switched his party registration to Democrat — it can be a hurdle.

Still, both men have courted influential supporters. James’ endorsements include Mayor Eric Garcetti and Councilmember Marqueece Harris-Dawson, and Gill’s include Rep. Ilhan Omar of Minnesota and Rep. Karen Bass, a frontrunner in the L.A. mayor’s race. (Feuer hasn’t yet endorsed any of the candidates.)

From the start of the campaign through April 23, Gill had pulled in more than twice as much money as any of his competitors — $1.3 million, the bulk of which he has loaned to himself, according to filings submitted to the L.A. City Ethics Commission.

Gill, who was 8 when his family emigrated from Pakistan, went to law school in Washington, D.C., and then joined the U.S. Navy as an officer in the Judge Advocate General’s Corps.

After his military career, he got involved with Muslim interest groups and did a stint as a senior policy advisor in the Department of Homeland Security under President George W. Bush. Amid debate over a marriage amendment in Virginia in 2006, Gill was quoted in a local newspaper as saying, “I believe that marriage should be between a man and a woman.”

The next year, he ran unsuccessfully for a seat in the Virginia House of Delegates as a Republican. While campaigning, Gill said he noticed potential voters often wrote him off before he opened his mouth.

“When you experience that level of hatred, it really makes you question your views,” he said. “I turned away from the Republican Party and became a very staunch Democrat.”

He reflected on the ways he, too, had perpetuated discrimination — “I was wrong then, absolutely wrong,” he said of his onetime opposition to same-sex marriage — and says he has worked since then to show his dedication to the Democratic Party. Before moving to California in 2018, Gill lived in Vermont, where he made an unsuccessful bid for a state Senate seat in 2016 and served as chairman of the state’s Democratic Party for several months in 2017.

His decision to run for city attorney, Gill said, was born out of his experience litigating against the office on behalf of one of his clients, Antone Austin, a Black man arrested by Los Angeles police during a search for a white suspect in 2019.

A few years earlier, through information leaked by former NSA contractor Edward Snowden, Gill learned he was being spied on by the U.S. government. It was surreal, he said, to hear people call him a mole when, in reality, he was simply a politically active American Muslim.

“I understand government overreach and how it can ruin your life.”

James grew up in Oklahoma and went to law school in Houston, where he felt a bit more free to come out as a gay man.

It was the 1980s, the height of the AIDS epidemic, and after graduating, James moved to Los Angeles for a job at a large law firm. He volunteered for AIDS Project Los Angeles and eventually joined its board of directors.

During that era, James said, he was a Democrat. But he re-registered as “decline-to-state” in the early 2000s, according to a Medium post he wrote. Around that time, after representing Jennifer Aniston in an invasion-of-privacy case, James began doing frequent guest radio appearances.

Before long, he had his own show on AM radio in Los Angeles, and by 2007 he was a registered Republican — a decision, he later wrote, made with “economic and financial matters in mind.”

A year later, he wrote a column on Townhall.com calling Democrats “global warming wimps.” In other pieces, he vented concerns about “the illegal alien invasion” and predicted that President Obama would pick Daffy Duck for a vacancy on the Supreme Court because Daffy has a speech impediment, is a “professional victim,” and is Black.

“Daffy’s selection,” he wrote, “will satisfy those calling on the president to select a minority.”

James said he regrets his talk-show-era commentary, adding, “Every day I work to make good on those mistakes.”

By 2013, when he ran for mayor of Los Angeles as a Republican, he had begun to strike a more moderate tone. He came in third in the mayoral primary and Garcetti, the eventual winner, later appointed him to the Board of Public Works.

After grilling him about past comments, the City Council voted to appoint James, who was elected as the board’s president by fellow members and remained in the role for seven years, ultimately leading more than 1,000 meetings.

James — who said that homelessness and affordable housing would be among his top policy priorities — noted that voters can pull up recordings of the old meetings to hear his leadership style.

“Listen in,” he said, “and determine my work ethic, my aptitude for fairness.”

In interviews, the five other candidates — all of whom identified themselves as lifelong Democrats — laid out arguments for why they’re the best person to lead the office.

Kapur, an attorney who handles corporate restructuring cases, said his years of volunteer work with a nonprofit that helps families who have experienced homelessness will help him lead with compassion and urgency on the issue.

The son of parents who emigrated from India half a century ago, Kapur said that enforcing wage theft violations would be another key priority for his office. The city, he said, needs bold, new leadership.

“All I hear about is frustration,” he said, “and incrementalism won’t get us where we need to be.”

Before Torres’ time as a federal prosecutor, she worked in civil law and as a political appointee in the Obama administration. There, she said, she focused on the Deferred Action for Childhood Arrivals program, which shielded “Dreamers” from deportation — a deeply personal experience as the daughter of formerly undocumented parents.

“I think my story is like a lot of Angelenos — child of immigrants, poverty and making it through,” said Torres, who added that her top priorities would be homelessness and public safety.

At a recent candidate forum, Feldstein Soto, who grew up in San Juan, Puerto Rico, told the crowd that her identity — “I call myself a Jewtina,” she later said — is tied to her values as a leader.

“Jewish values include justice and doing good,” she said. “Latina values include collaboration, getting the job done, solving the problem with transparency.”

She said her extensive managerial experience, including overseeing multibillion-dollar public deals, sets her apart from her rivals — as, she said, does her vow not to ever run for any other office.

Kim, whose family emigrated from Korea when he was 9, said his decision to run was born out of loyalty to the office he’s worked in for 20 years — one he’s watched suffer a reputational blow amid the DWP scandal.

“When the FBI raids City Hall and our office, it is embarrassing as a public servant,” said Kim, who has publicly supported the effort to recall Dist. Atty. George Gascón and says that, if elected, he will prioritize fighting corruption. “I’m very committed to righting the ship for this office.”

Valle Cole said her life experience as an Afro-Latina raised in Tijuana, whose family was homeless for a time, would guide her leadership. She worked in the city’s attorney’s office for more than 15 years, but was fired in 2018 — retaliation, she contends, for challenging management.

“I know what work needs to be done,” said Valle Cole, who said she would prioritize rooting out corruption and domestic violence education.