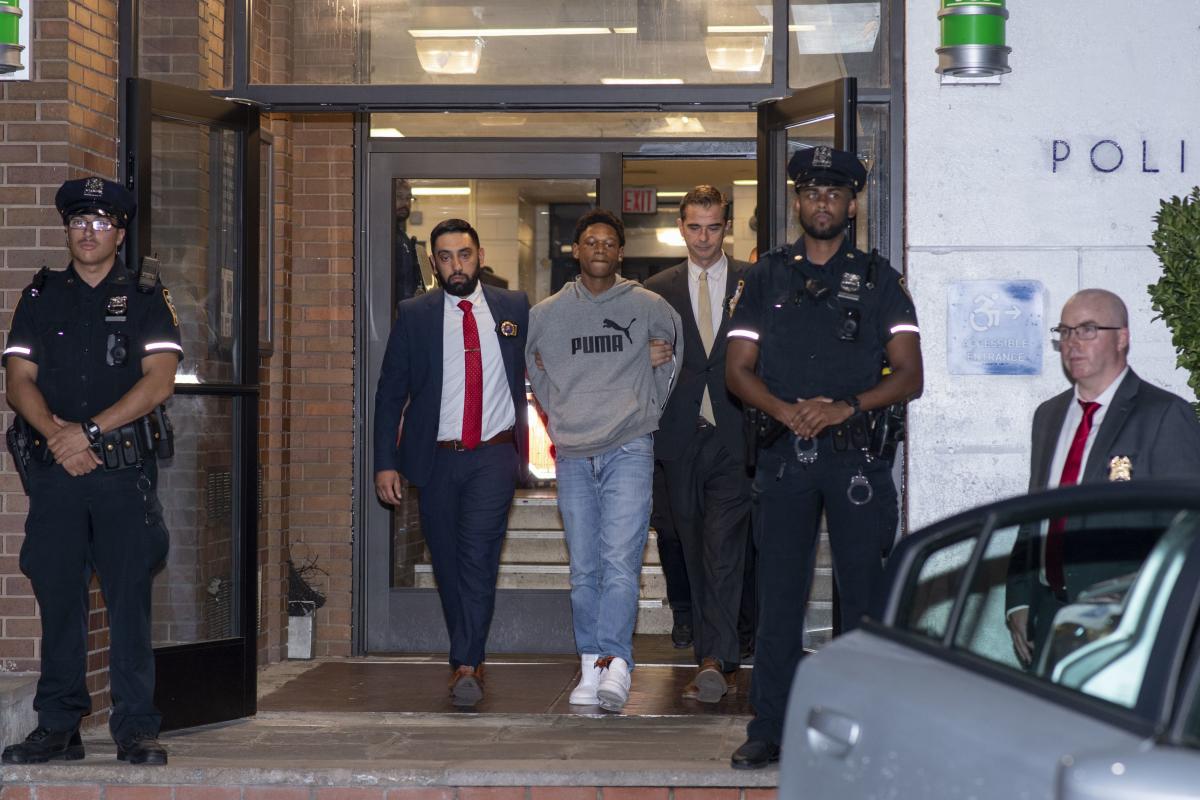 Bronx cop mugging suspect Oshawn Logan told police his participation in a brutal attack on an off-duty NYPD officer was his “second, third time” carrying out such a crime, court papers state.

A complaint filed Saturday in Bronx Criminal Court says Logan and other members of the mugging crew took a credit card and other items from the officer, Muhammed Chowdhury, when they brutally beat down the off-duty cop as he was jogging Tuesday.

“They got on him. The cards and whatever, they got from his wallet. I mean, everybody used the card,” said Logan, 18, according to the complaint.

The credit card was used in a Bronx store to buy “numerous” items, the complaint says.

“It’s like my second, third time doing this,” Logan told police, according to the complaint. “Third time. I just, I’m never doing this again.”

At arraignment in Bronx Criminal Court on Saturday afternoon, Judge Lisa Headley set Logan’s bail at $50,000 cash, according to a court clerk. Logan may also post a $100,000 insurance bond or a partially secured bond of $100,000, a percentage of which would have to put up in cash.

Outside the courtroom, members of Logan’s family insisted he is not guilty of the charges.

“My cousin is innocent. He didn’t do anything,” said a cousin, who gave her name as Laroya. “This is mistaken identity.”

“He was with his friends, but they were into something he didn’t know they were going to do,” Laroya told the Daily News. “He didn’t do that type of stuff.”

Before they busted Logan on Friday, investigators identified him with help from an extensive video canvass, a police source with knowledge of the case said.

After they mugged Chowdhury, the suspects fled in a stolen black sedan, said police sources.

Using surveillance video, detectives tracked the sedan block-by-block up to four miles before spotting Logan getting out of the car and going into a building he often frequented, the sources said.

Logan and his associates are suspected of swiping at least eight cars from Bronx and Queens drivers this month before switching gears to brazenly robbing random pedestrians. They’ve committed at least 19 crimes this month, police said.

The “run and gun” strategy, where three or four criminals surround, beat and rob people on the street, is nothing new, but has been seen more frequently this year and are being used by a handful of crews throughout the Bronx and upper Manhattan, police sources said.

A similar crew is suspected in a mugging of a 26-year-old off-duty officer and his two friends on Dyckman St. in Manhattan’s Inwood neighborhood. The crew robbed the officer and his friends of jewelry, cellphones, cash and credit cards — items they can quickly resell on the street.

One of the officer’s friends was pistol-whipped during the heist.

“What’s crazy is that these robberies are random,” a retired NYPD officer told The News. “They aren’t targeting off duty cops. They’re just robbing anyone and everyone they come across.”

The suspects often wear the clothing of a similar type and color, making it harder for them to be recognized by their victims.

The muggers are as “fast as velociraptors” and use “herding tactics of lions and wolves,” the officer said.

“They overwhelm their (victims) by using their speed, sheer numbers and ambush predator tactics,” he said. “They then disable their prey by going for the head with a knockout followed by a curb stomp for instant incapacitation.”

The thieves then run off as quickly as they arrive, usually to a waiting car, police said.

Logan’s crew was getting more and more violent and prolific in the days leading up to their confrontation with Chowdhury.

The crew also became more daring, carjacking a 52-year-old livery cab driver of his 2016 Honda in Co-op City in one Monday incident and holding a 39-year-old man from behind while an accomplice repeatedly punched him in the face, cops said.

Eugene O’Donnell, a professor at the John Jay College of Criminal Justice and a former police officer, suspects these robbery crews act so brazenly because they know state bail and discovery laws passed in the last few years making it harder for cops and prosecutors to prove crimes in court.

“They may be taking more audacious actions perceiving that the risk of apprehension and meaningful punishment are now quite low in a city where the police are officially discouraged or outright forbidden from acting,” O’Donnell said. “You also have many more people at liberty who would once have been incarcerated.”

Now that Logan is in custody, the rest of his crew should be easy to find, said Detective Endowment Association President Paul DiGiacomo.

“We said we’d get the cowards responsible for preying on New Yorkers and our off-duty brother police officer — and this arrest is just the start,” said DiGiacomo.

“NYPD Detectives will go to the ends of the earth to ensure these criminals are brought to justice. Our message to them: There’s nowhere to run and nowhere to hide.”